I have been to the Red River Valley area a couple times to visit wineries Arché and Blue Ostrich Winery but unfortunately Gloria has never been able to make it. That changed recently when we made our road trip plans to drive up on a Saturday, spend the night, and return on Sunday. Plans changed last minute and we were to meet Laurie and Shelly Ware along with Bob Wonacott and Susan Ramp—owners of Eperon Vineyard—at Arché, and then spend the night at the Blue Ostrich Winery’s guesthouse.

Since Gloria and I were driving up from Houston, we planned on stopping through Grapevine on the way and visit new wineries which had opened in the past six months. Our first stop was the Messina Hof Grapevine Winery. We had seen a lot of photos from the previous week’s grand opening and from Rebecca Marmaduke’s fantastic post of the media event, so we were excited to check out Messina Hof’s third location. 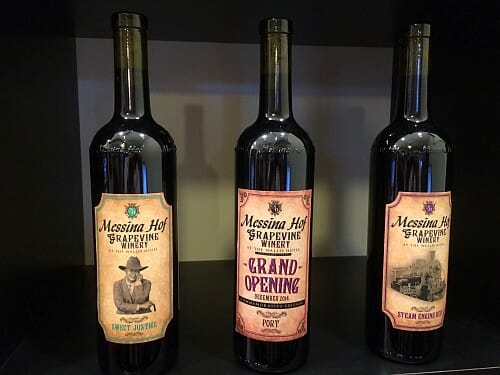 We arrived at Messina Hof Grapevine Winery and were not disappointed with the remodeling which had been done to the historic Wallis Hotel. The Bonarrigos had kept us updated on the remodeling progress any chance we got to see them after the initial announcement in August. We enjoyed a tasting including a tour of the facilities, and as is the case at every Messina Hof location we have visited, all the staff was very friendly and helpful. The local Grapevine wine lovers will definitely enjoy the new Messina Hof location.

Walking down Main Street, we went to the next winery which was Umbra Winery which Rebecca Marmaduke had recently written about. Umbra Winery had rebranded itself from CrossRoads Winery and moved its tasting room from Little Elm to Grapevine. After seeing the new tasting room and wines, I think it was a wise choice as it will definitely provide more traffic than the previous location. We met owner John Wilson who gladly started us on a wine flight tasting from which there were three flights to select from and they included three 2 ounce pours. There was also a great selection of foods to buy if you are hungry. 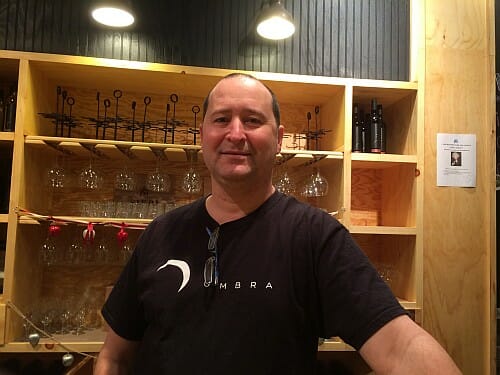 Umbra Winery has a few unique things we haven’t seen at a winery or seen very often. First were two bookcases of wines with their special olfactory devices which allows one to smell a wine before opting to buy it. What a great idea as the nose is the most important factor even when tasting wines. Another unique item was a sign which allowed customers to text to a phone number to get access to special offers. And finally, besides a VIP program, Umbra Winery has a loyalty program which tracks your progress electronically. Innovative methods and a cozy tasting room will surely bring customers to Umbra Winery. 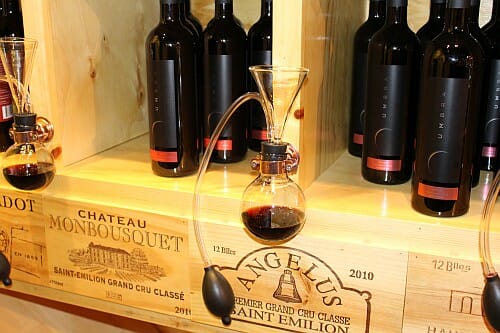 Around the corner, all in walking distance, was our last stop in Grapevine which was Sloan & Williams Winery. The winery had opened in July and was already impressing wine lovers. Tastings are done per taste and we opted to taste the wines which we were told were from Texas. I’m not quite positive on the Roussanne though as the website says it is from California grapes. It was time for lunch though and Sloan & Williams has a great selection of tapas, so it was easy to select something to eat.

During our tasting, who should walk in the front door but Bob Wonacott and Susan Ramp who we were supposed to meet at Arché. They had thought the same thing we did since they had not seen the new Grapevine wineries either. We had a nice conversation while we enjoyed tasting the wines and eating the tapas. It was then time for us to make the trek to Saint Jo and Arché.

After driving in the Red River Valley, we arrived at Arché. The first thing I noticed was the expansion to their tasting room which was still under construction. It was a little chilly outside so thankfully the sliding glass doors around the expansion were complete and the inside was warm. The Wares were already at the winery and Bob and Susan arrived soon. After greeting Laurie and Shelly again, we said hello to owners Howard Davies and Amy Sterling. 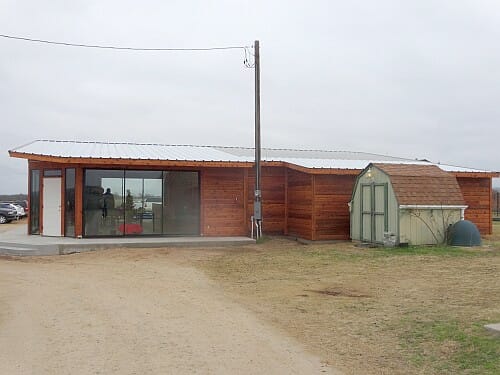 Since it was Gloria’s first visit, she had a tasting of their wines, and of course I couldn’t pass up doing a tasting too along with everybody else. As expected, she enjoyed Arché’s wines just as everybody else did too. When the tasting room expansion is complete, it will make a very nice place to come and hang out with a glass of wine.

We then headed to Blue Ostrich Winery which was our last winery destination for the day. Julie and Patrick Whitehead greeted us as we all arrived and another tasting was started. After enjoying some of the wines, Patrick led our group on a tour of the production area. A nice barrel room had been finished next to the tank room. A view of the vineyard was also in order since we had vineyard owners with us, and it was mentioned that the vineyard looked a lot larger than the current eight acres. 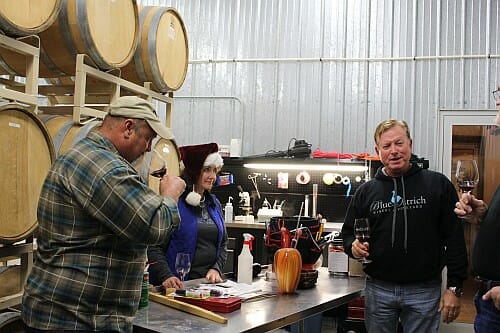 Unfortunately with it getting dark early, Gloria never did get the chance to visit the ostriches but I’m sure we’ll be back. We arranged to get the keys and information for the Blue Ostrich Winery’s guesthouse and then headed slightly down the road to the guesthouse.

Laurie Ware had made reservations at the popular Ancient Ovens restaurant and the Whiteheads joined us for dinner. Ancient Ovens is known for their wood-fired pizza and since it is also a BYOB, it is even more popular with wine and beer being brought in. Make your reservations early if you ever want to go.

After saying goodbye to the Whiteheads, we took the short drive back to the guesthouse and narrowingly avoided a couple deer running right in front of us as we pulled into the guesthouse driveway. It hasn’t been Gloria’s and my first run-in with a deer driving the back roads of Texas to and from wineries at night, so we are always especially careful when there is a chance of deer in the area.

We all sat in the comfortable living room of the guesthouse and talked until I personally got too tired and had to call it a night. After a good night’s sleep by everybody, even though Bob said he saw some ghost interactions, we made plans for the Sunday. First up was a visit to Marker Cellars where Mark Rogers was waiting for us. He had started a fire outside but it was still a little chilly for us to sit out there initially.

Since some of the group had not been to Marker Cellars before, we started the day with a tasting. While enjoying the wines, we soon met Mark’s wife Becky and we all went to look at her horses. Along with the horses, Mark had us try some barrel samples. After a nice tasting, it was clear Marker Cellars is a winery to visit now and watch out for in the future. 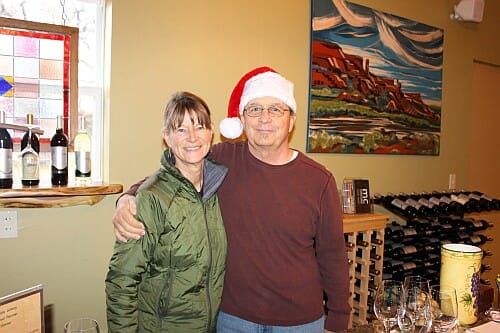 Gloria and I had planned to visit Brushy Creek Vineyards since that was another winery she had not had the opportunity to visit yet. I had talked with most of the staff along with owner Les Constable at TWGGA’s Grape Camp in November so that was another reason to visit. In addition, since Brushy Creek was rated second in the Battle of the Texas Tempranillos, we were looking forward to seeing the Texas Wine Lover medal on the bottle in the tasting room. I had worked with wine club manager Candy Roos to arrange shipment of the bottle of Tempranillo and when she heard we would be visiting on the Sunday, she came in on her day off to meet us.

Gloria and I said goodbye to Mark and Becky Rogers and the rest of our gang to head to Brushy Creek. We were greeted outside the winery by Steve Roos, Cindy’s husband and one of the people I talked to at Grape Camp. We met Cindy and she started us on a tasting of Brushy Creek’s wines. During the tasting, we glanced around and saw the Tempranillo with the medal, along with all the other medals Brushy Creek Vineyards has won over the years. 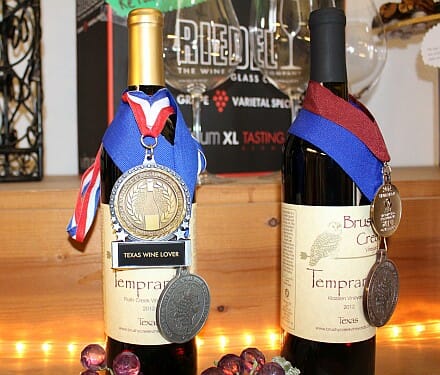 Owner Les Constable came in and met Gloria, and then offered to take us on a tour of the winery. We went to the production area and Steve helped Les do some barrel sampling of wines for all of us. Soon Bob Wonacott and Susan Ramp arrived to join in on the fun. Les made the comment he was going to sit because of a bad knee and Gloria commented how she had bad knees too. Soon the two of them were enjoying barrel samples while seated in the winery. What a way to do it! 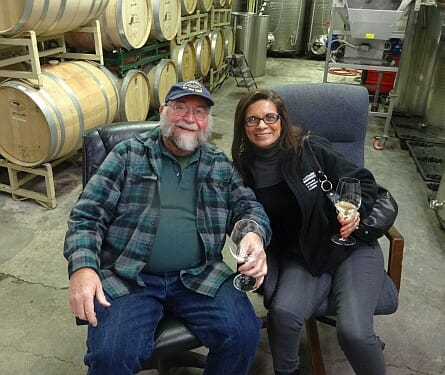 We finished sampling and tried a couple more wines in the tasting room. Gloria was impressed and enjoyed the opportunity to try some of Brushy Creek’s wines. I enjoyed returning to the winery and the hospitality of the staff and of course Les. If you’re anywhere near Brushy Creek Vineyards and have not had the time to stop in for a tasting, do yourself a favor and spend a couple hours to enjoy what they have to offer.

Our winery visits were done, but since we needed lunch we went to a nearby Mexican restaurant with Bob and Susan to finish off our day. It had been a fun, but short trip along with some friends, and visiting great wineries in Grapevine and the Red River Valley. 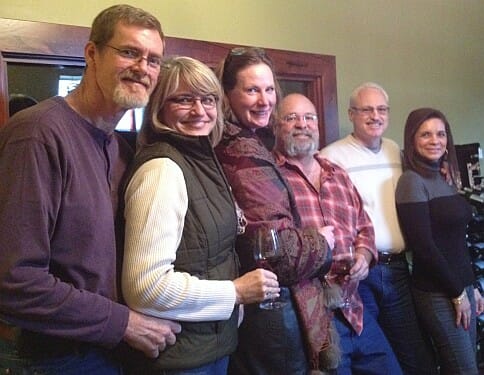 Shelly and Laurie, Susan and Bob, Jeff and Gloria