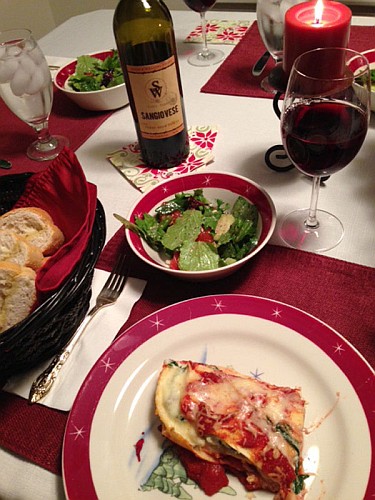 Everyone has their favorite holiday feast—right after Christmas day, I’ve seen my friends posting their fabulous meals on social media, including prime rib, ham, and roast turkey. If you read my Thanksgiving post, you already know that particular holiday is all about the turkey and trimmings at our house. But by the time Christmas rolls around, we’re ready for another special dinner—namely, homemade lasagna.

“Why lasagna?” you may be wondering. Well, as with many blended families, it used to be that making the round of turkey dinner after turkey dinner got a bit stale for some family members, so a few years back I decided to mix it up and go Italian. My own heritage is Irish-Native American-French-German, but that doesn’t stop me from wanting to lay claim to a bit of Oenotria, as the Ancient Greeks referred to Italy, so rich was its wine-making culture. Hand-in-hand with that history of viniculture is the cuisine of Italy, which has given the world pizza, pasta, and espresso. What’s not to love?

So, I had been contemplating my Christmas lasagna for a couple weeks when we were enjoying a wonderful dinner at Ascension Coffee and Wine Bar recently. Talking food, wine, and coffee with owner Russell Hayward, somehow in the course of that conversation, I not only became convinced that I need to make my own homemade Bolognese sauce from scratch—Russell somehow also mesmerized me into thinking I should attempt fresh pasta for the first time ever.

I was already planning to pair my lasagna with Sloan & Williams Texas High Plains Sangiovese 2012, and that alone was enough to inspire me to reach for new heights. I’ve been fortunate to taste some extraordinary Texas wines this last year, but truly, Sloan & Williams Sangiovese has to be among the top three I sampled. Aged in French oak, it has a lush red licorice and black cherry cola aroma, with beautiful richness and depth of flavor. On its finish, you pick up subtle hints of strawberry and violet, and I would put it against any old world Sangiovese any day.

With the stage set and the self-imposed challenge issued, I went on Amazon.com and ordered myself an inexpensive but serviceable pasta roller machine. Next, I watched a slew of pasta-making videos, including one by America’s Test Kitchen, another by Giada de Laurentiis, and yet another by Laura Vitale. Armed with visuals and recipes, I then bravely dove into the pasta-making process around 4:00 pm on Christmas day.

Now, one additional thing I should mention is that we do have a vegetarian in the family, and while I enjoy the challenge of making different variations of the same dish, it also can further complicate things if: A) I’m trying to learn an entirely new process, and; B) the dish is somewhat time-intensive to start. After I made my first batch of pasta dough, it dawned on me that I was going to have to double-down and make not just one but TWO batches of homemade pasta, and I can tell you now that what makes homemade pasta so darned special is that it is pretty hard work.

Dinner was already an hour late in coming when I told my husband to lay out some cheese, wine, and crackers for everyone because I was up to my eyeballs in cranking out enough pasta sheets to build both a spinach-cheese lasagna as well as a lasagna Bolognese. Finally, I got to the point where I had to admit that only one of the lasagnas was going to get the benefit of the homemade pasta, and we were in a panic trying to figure out where we could get dried, store-bought lasagna noodles on Christmas day.

That’s when a genuine Christmas miracle occurred—I opened our pantry, and lo! There were just enough noodles to make the second lasagna. Glory be! I assembled both lasagnas, threw them in the oven, and began tossing the salad.

And there was much rejoicing when the two gorgeous dishes emerged from the oven. The meat-eaters got a bit of both the spinach lasagna as well as the Bolognese so they could taste and compare the fresh pasta to the dried, store-bought stuff, and it’s likely no surprise to you all to learn the homemade pasta beat the pants off the premade pasta. I’m afraid I’ve now set a precedent that will be carried forth, along with the almond raspberry shortbread cookies and the New Year’s Day black-eyed peas.

I even made my own video showing a shortened version of the tortuous pasta-making process, but don’t expect to see a wide-eyed, sexy Italian babe performing for the camera. I filmed my video using a tripod while wearing comfy clothes and no make-up, so go to Giada or Laura for the glamorous side of pasta-making. But I did capture the essence of the process for anyone who feels intimidated at the thought of making their own pasta—I’m proof positive that even a rank amateur like myself can do it.

However, if you elect to go with store-bought pasta, put your hands on some Sloan & Williams Sangiovese, serve it with your pasta, and your guests will gush over your culinary prowess, regardless.