For the conclusion of using our Texas Hill Country Wineries season pass, the last wine trail event was the 2014 Holiday Wine Trail. The trail would include the booklet for marking down the four full wine tastings per day like in the previous wine trail event, but the Holiday trail also included a Christmas ornament. We started the trip on a Friday just like last time as Fridays give a more pleasurable experience at a winery without the crowds.

We planned the trip and tried to determine what wineries to visit in Driftwood on the drive from Houston to Fredericksburg and surrounding Hill Country wineries too. The problem we found with any wineries in Driftwood was they did not open until 11 a.m. instead of the common 10 a.m. like on Highway 290. This meant one less hour of being able to visit especially when factoring in the driving time between wineries in the Hill Country. 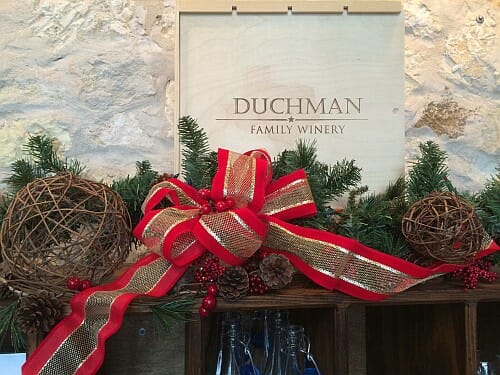 Gloria decided our first stop would be Duchman Family Winery where we would pick up the wine trail booklet and wine trail Christmas ornament. We used our first stamp in the booklet for a wine tasting and as usual, we enjoyed all the wines we tasted. We had an enjoyable time talking with the tasting guide who had recently moved to Texas a few months prior. She had not had the opportunity yet to visit other Texas wineries so we gave her some suggestions on local ones to visit.

Our next stop was Perissos Vineyard and Winery in the northern part of the Hill Country. When we parked, coincidentally owner Seth Martin was outside who greeted us and led us into the winery. Perissos had done a large building expansion last year which gave a large tasting room and could also be used for events. We were surprised when Seth told us he was expanding again. 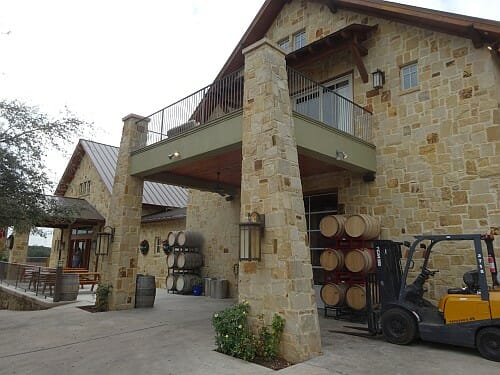 He showed us the blueprints for what will be a new building near where the current parking lot is located. It will be a two story building with the first floor for case storage and a covered bottling pad entrance. The entry door on the bottling pad is designed for a mobile bottler to back into the building which will provide a convenient means for bottling right next to storage of the finished bottles. Seth said last year Perissos produced 1,500 cases of wine but this year it will be 6,500!

The second floor of the building will have townhouses available for rental by guests. The Martins who currently live over the winery will eventually be moving off-site and that will give more space for people to stay at the winery. We look forward to staying overnight at the winery sometime in the future.

After another stamp in the booklet for a tasting at Perissos, it was off to a new winery which had recently opened: Wines of Dotson-Cervantes. We have met owners Alphonse Dotson and Martha Cervantes a few times and was looking forward to visiting the winery. Unfortunately Martha was not able to be there but we had a fun time with Alphonse. Look for a post soon about our visit.

The last stop of the day was the newly opened Lost Draw Cellars. We were anxious to visit since we had done a preview of the winery and they had the top Tempranillo in our Battle of the Texas Tempranillos. Part of the anxiousness was to see the first place medal we mailed them after the competition hanging on one of their Tempranillo wine bottles. We met co-owner Andrew Sides, general manager Matt White, and the rest of the staff. It was close to closing time due to all the driving we had done, but they allowed us to do a tasting. It was then that we learned they had never received the medal. It was never returned by the post office so somebody is enjoying it somewhere. The next morning I ordered another medal and had it shipped directly to the winery in a few days so they would have it by the following weekend. We did hear they successfully received the second medal. Since we had done a quick tasting, we promised we would be back the next morning for the start of our Saturday visits.

We enjoyed dinner for our first visit at the Navajo Grill and then checked into our hotel, the Hangar Hotel, another first for us.

Our first stop on Saturday as promised was Lost Draw Cellars. This time we enjoyed a glass of wine since we had done a tasting the previous day. We decided to purchase a wine tasting for somebody on their Pour It Forward chalkboard (described in our post on Lost Draw Cellars) which was for a person who did a Like on the Texas Wine Lover Facebook page. We saw later in the week somebody had claimed it so maybe we’ll learn from that person who it was and that they enjoyed it. 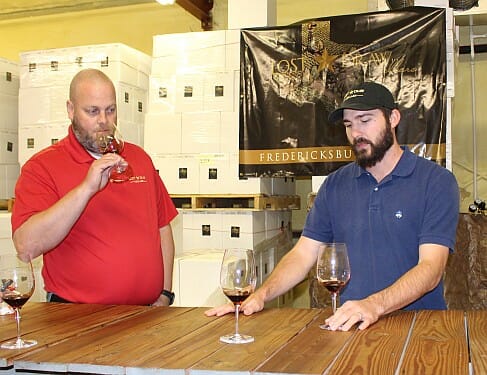 One advantage to visiting the winery twice was the chance to do a barrel tasting of the 2013 Sangiovese. The Sangiovese came from the vineyard of Mike Timmons. We are used to wineries using a wine thief to do tastings from barrels, but Lost Draw had purchased a barrel tap, much like a tap on a beer keg. The tap avoids oxygen getting into the barrel while doing a tasting. When the tap is moved to another barrel, they put nitrogen in the previous barrel to keep the air out. Outside the production building was an old Sangiovese vine from “Doc” McPherson’s vineyard. It was interesting that years ago they trained the vines to have four cordons instead of the common two cordons like is done today.

While at Lost Draw Cellars, fellow blogger and writer Russ Kane arrived to do a tasting at the bar. His wife Delia arrived to pick him up and we soon left after they did to continue our winery visits for the day.

Next up was Pedernales Cellars and it was time to use our first wine trail stamp of the day for a tasting. We met familiar faces like tasting room manager Mike Ago along with reserve room tasting guides Cece Barretto and Bill Burns. And it is always a pleasure to see and talk with co-owner Fredrik Osterberg. Mike gave us a tasting of the Pedernales Dolce which is a dessert wine. It is fermented Viognier for one year and then brandy is added. It then sat in new French Oak barrels for two years. Very nice job David Kuhlken! 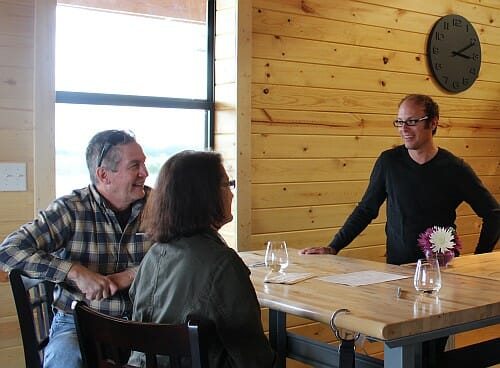 Making our way up the road, we had to stop at Kuhlman Cellars to see fellow Texas Wine Lover team member Jeremy Wilson along with Jennifer Beckmann and co-owner Jennifer Cobb. Jeremy was just finishing a tasting with surprisingly Texas Wine Lover followers and we enjoyed a nice chat. We had a glass of wine then made the short trip to William Chris Vineyards.

We had planned to visit the new Madeira tasting bar at William Chris so we headed to the small building we had seen previously. The menu offered a selection of just Madeira or a choice of cocktails made with Madeira. We chose two cocktails which were wonderfully made by Rachael Wolz.

Our last winery we had selected to visit was Compass Rose Cellars and we had to make a decision what to do since it would be getting close to closing time there and we still wanted to make a quick stop elsewhere. But then somebody told us Flat Creek Estate was doing tastings across the street at Hye Market. A quick decision was made to stop by and it turned out Spring Drake, the wife of winemaker Tim Drake, was doing the tastings. Gloria walked around taking photos with her new camera while I did a quick tasting. 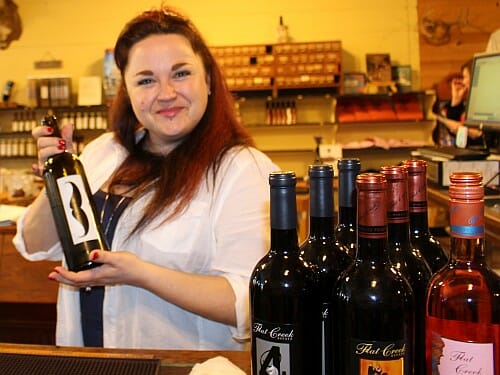 Next was a stop next door to Hye Meadow Winery where we always enjoy seeing familiar faces and trying whatever wines are new. The original plan was to do a full tasting using our wine trail booklet but since time was getting short, I had a small glass of wine while Gloria walked outside to take more photos.

The last winery of the day was Compass Rose Cellars. They were getting set up for a dinner event which we would have attended but had previous plans. With the wine trail booklet, we were able to taste some Calais Winery wines in addition to Compass Rose wines. It was too short a visit, but I’m sure it won’t be our last. 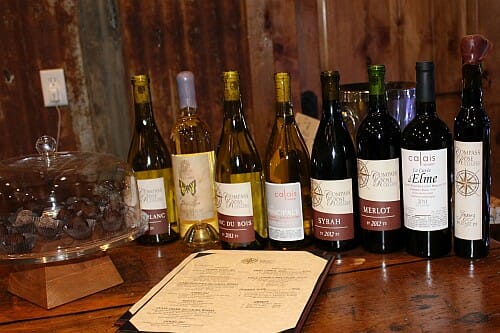 Dinner plans were at Cabernet Grill with new friends Sheri and Pat Patillo. We had a great dinner and after saying goodbye until next time, it had been a long day so it was time to get back to the hotel. 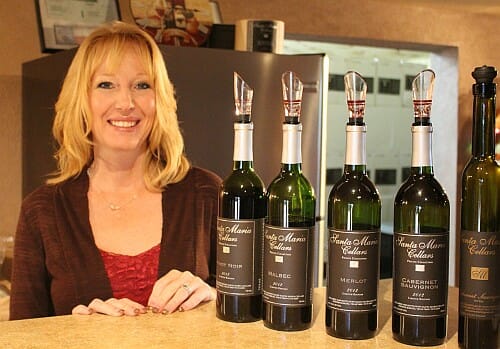 On the way home Sunday, it was time to revisit some wineries. First up was Santamaria Cellars where we were able to use the wine trail booklet for a tasting with Angela Santamaria. Kerrville Cellars was next. 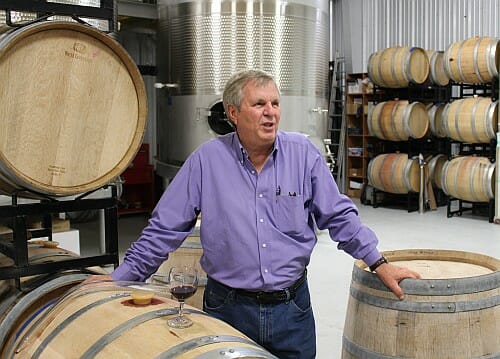 Arriving at the winery, we met co-owner Wayne Milberger. He led us through a tasting using the wine trail booklet again and then gave us a tour of the production facility, bottling machine room, and the rest of the winery. We tasted a wonderful port-style wine from the barrel which we can only say look forward to it! The winery started out making only wines from California juice but they are starting to be able to get Texas grapes and have made a wonderful Muscat Canelli, so watch out for Kerrville Hills Winery in the future.

It had been a long weekend but somehow the road trip weekends still end up seeing too short. Cheers!