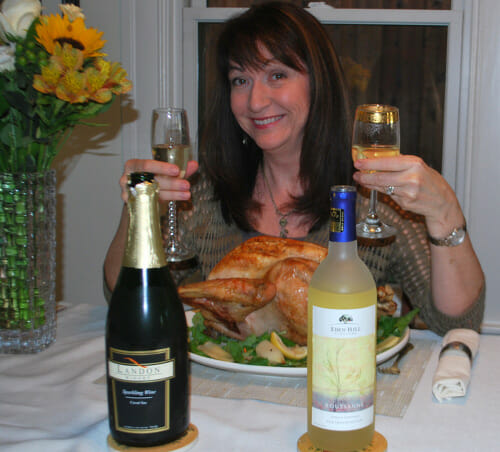 Many of you out there probably think the big Thanksgiving Day match was the Philadelphia Eagles versus the Dallas Cowboys. For me, though, the real faceoff was at my dinner table as we tried pairings from two different wineries with roast turkey and a variety of sides. How did it all turn out? Well, I can tell you that both wines performed better than the Cowboys (sorry, Cowboy fans).

You may recall that back in my November 19 post, I offered up some ideas for Thanksgiving feast pairings with an expert tip from Gina Gottlich (Second Floor Bistro and Bijoux), who suggested a sparkling wine. That led to my first wine choice, an award-winning Landon Winery Cuveé Sec, which the label indicates is actually made in Deming, New Mexico. Given that there are several gorgeous sparkling wines coming out of Texas’ western neighbor these days, the origins of Landon’s Cuveé didn’t come as a huge surprise, and I was absolutely delighted to open a bottle on Thanksgiving. 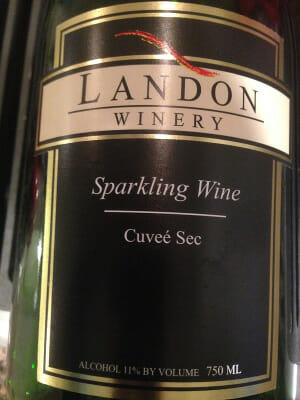 My husband Ben and I picked up a couple of bottles of the sparkling in McKinney on our way to our next stop, Eden Hill Vineyard in Celina. I was excited to visit Eden Hill Winery and Vineyards and meet the Hornbakers, or rather, formally meet them because I’d met Linda and Chris briefly at Grapefest during one of the huge mass tastings for the People’s Choice Awards. If you look at the Eden Hill page in my Wine Reference Guide from that day, you’ll see that their 2013 Moscato made quite an impression on me when I’m not even a particular fan of sweet whites. So, I was already prepped for an excuse to make the drive to get a bottle (or two) of their 2013 Texas High Plains Roussanne, which is a dry white made from Oswald Vineyard grapes. 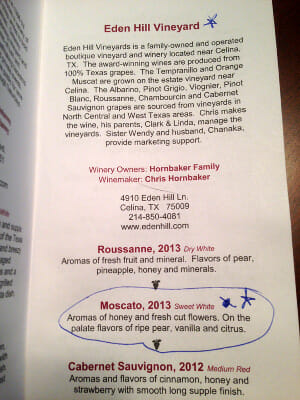 The weather had been chilly and rainy all week, but we got a nice break on the pleasant Sunday afternoon we visited Eden Hill. Luckily for us, there were only a few people in the tasting room, giving us an opportunity to visit with Chris Hornbaker, the winemaker, and Linda Hornbaker, who owns the winery along with her husband Clark. We tasted a wide range of wines that day, from their Divine White to their Cabernet Sauvignon, and I can honestly say we didn’t try a single wine that we didn’t find delicious and interesting. Chris’ style of winemaking strikes me as refined, light-handed, and elegant—almost more French than New World. Given that Texas’ climate tends to result in some rather overripe, high-alcohol wines, the restraint and subtlety of Eden Hill wines hits my palate just right, even when the alcohol level crept above 14%. 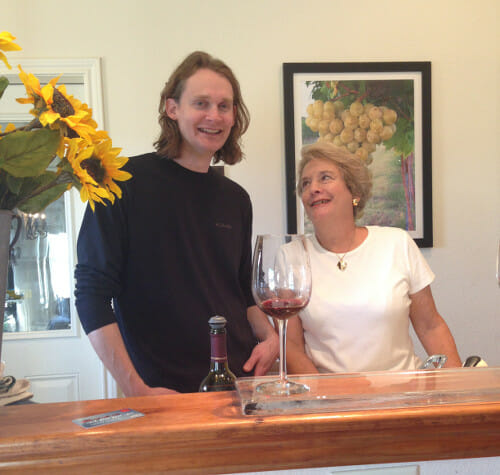 We began by just tasting the wines on their own apart from the food so we could get an accurate profile of the wines themselves. We first tried the Landon Cuveé Sec —why? No particular reason. Just like everyone else, we were just eager and curious about the bubbly. Sticking our noses deep into the glass, we were struck by the yeasty, slightly sweet aroma that melded with the odors of baked bread and roast turkey already wafting through the house. We hadn’t even sipped any wine yet, and it was already trying to pair! 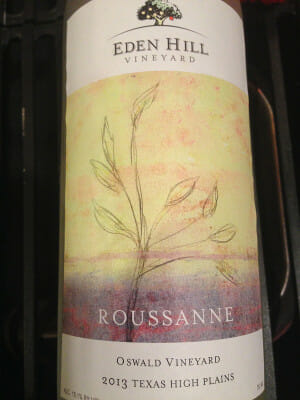 After a little palate cleansing, we tried the Eden Hill Roussanne. It was, of course, quite different from the Cuveé, but just as lovely in its own special way. The nose was tart, with hints of grapefruit and tart apple, and a surprisingly weighty feel for a white. The Roussanne had some heft, with a light to medium viscosity, and the flavor was an interesting combination of citrus and herbal with hints of pear and honey. I admit, while I was enjoying the Roussanne immensely, it did seem to me that the tartness of the palate was probably going to lend itself more toward seafood or maybe some creamy cheeses.

The wines were definitely facing some heavy pairing challenges, with a menu that included brined, roast turkey with gravy; candied sweet potatoes; Southern cornbread-sausage dressing; gold potatoes mashed with the skin; sautéed Brussels sprouts (had to have something green with all those carbs); old school macaroni and cheese; homemade sourdough bread; and finally, homemade jellied cranberry sauce.

(A special side note: we always have two kinds of pie—chocolate espresso pecan and pumpkin. We didn’t attempt to pair the dinner wines with the dessert, though. With that, we enjoyed a lovely pour of Haak Vineyards Jacquez 2008 Texas Madeira. As you can see, Mia thought it was the cat’s meow.) 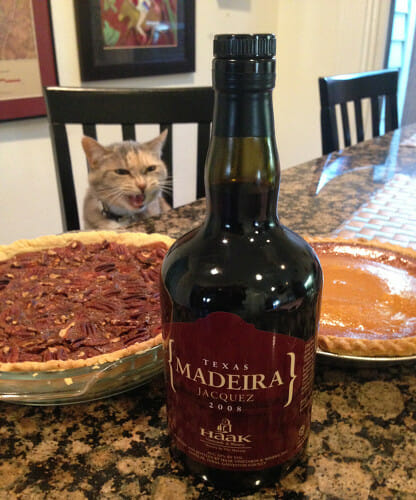 I probably already tipped my hand here, but of course, the Landon Sparkling was the better pairing, hands down. As delicious as the Eden Hill Roussanne was, the Landon Cuveé Sec was nimble in its ability to match a diverse range of dishes with ease. Its faintly fruity profile and light effervescence brought out the sweetness in the roast turkey, gracefully backed away from the sugary sweet potatoes, and even let the Brussels sprouts have their moment without any controversy.

Gina certainly called that one correctly. But stay tuned—I definitely see some Eden Hill Roussanne and scallops coming soon to a dinner table near me.