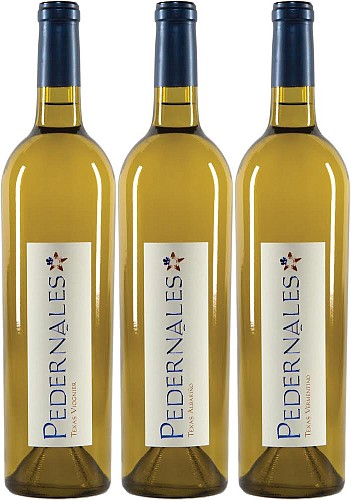 (STONEWALL) – Pedernales Cellars is pleased to announce the release of three new white varietals from the 2014 harvest over the next couple of months. The long-awaited return of Viognier – made possible by a favorable 2014 harvest – will be available in stores and restaurants across Texas, and both Albariño and Vermentino will be available in the tasting room during the first part of 2015. All three varietals will also be available for order on the Pedernales Cellars website.

Winemaker David Kuhlken anticipates the 2014 edition of Pedernales Cellars’ most popular white varietal will be similar to the 2012 edition, with a nose incorporating peach, honeysuckle, and tropical fruits, and additional notes of vanilla.

Kuhlken says this year’s harvest was plentiful enough to allow for a Viognier Reserve release in the spring of 2015 – similar to the one that won Grand Gold honors in France two years ago, in a defining moment for the Texas wine industry.

The 2014 Albariño, which will be available in the tasting room in March, will likely be similar to previous editions of the varietal, which featured substantial peach and citrus aromas with a hint of rose.

The 2014 Vermentino, which will debut as part of the Pedernales Cellars portfolio in the tasting room early next year, is a grape from Italy that flourishes in the Texas terroir. Vermentino offers a crisp, medium bodied wine with flavors of citrus and Granny Smith apple that pair well with seafood.

“We’re very excited to be bringing back our Viognier, as we know a great number of people have been anticipating its return,” said Dr. Julie Kuhlken, co-owner of Pedernales Cellars. “We’re also looking forward to our continued success with Albariño, and we think tasting room visitors will find Vermentino to be an enjoyable addition to our roster of white wines.”

Pedernales Cellars will announce via its Facebook and Twitter accounts when each of the varietals will be available in its tasting room.

For more information about Pedernales Cellars and its wines, visit the winery’s official website at www.pedernalescellars.com.