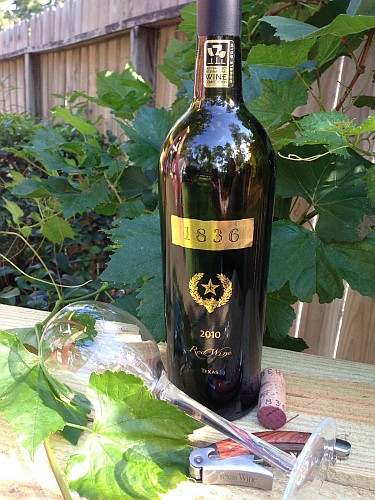 Llano Estacado Winery in Lubbock has been producing excellent wines since 1976 and is the largest premium winery in Texas. I enjoyed visiting Llano Estacado in May and since that visit, they will be building a new public tasting room and visitor’s center this year.

The 2010 vintage has done very well in wine competitions. For example the “1836” won a Double Gold at the 2013 San Francisco International Wine Competition.

As mentioned, the 2010 vintage is a blend of 51% Cabernet Sauvignon and 49% Syrah from grapes in the High Plains and Far West Texas. It was aged for 28 months in 59-gallon French and American oak barrels and was bottled in March 2013. The wine has a deep red color with flavor tones of red and black fruits and black pepper. Tannins are medium with a medium plus finish.

Perhaps the most interesting thing about this excellent wine is the background history of how it came to be. Llano Estacado Winery uses Republic National Distribution Company to distribute its wines. One of the owners wanted “his” own wine that he could present to his friends and clients as the very best Texas wine because it was his. Since he could not make the wine he wanted, he looked for a quality winery to help him in his goal and approached Llano Estacado. Fortunately for him, they agreed and worked with him to make the wine. He came up with the label, name, and story on the bottle and worked back and forth with Llano Estacado until he was satisfied. Llano Estacado told him he would not be able to get the same blend all the time which he was fine with. He does, however, have to approve every version of “1836.”

The story on the label is as follows:

On April 21st, 1836, a hand of rugged pioneers, in a part of Northern Mexico known as Texas, won the historic “Battle of San Jacinto.” Shortly after this decisive victory, peace treaties were signed, and the independent nation of Texas was established. This wine celebrates the spirit of those who fought for the great Republic of Texas.