As you probably are aware, October is Texas Wine Month. That meant there was no doubt Gloria and I had to go on a road trip. We still had the Texas Hill Country Wineries season pass we won at the silent auction at the TWGGA Conference in February, so it was only fitting we head to the Hill Country.

Since Texas Wine Lover recently started a podcast (subscribe on iTunes or listen on Stitcher), our first stop was Bending Branch Winery where we would meet owners Dr. Bob Young and John Rivenburgh to discuss their new acquisition, a flash détente machine. John was tied up for awhile so Dr. Bob kept us entertained, and since we were on the Texas Hill Country Wineries October wine trail (tickets still available!), that meant we could get a full tasting which we did enjoy. When John became free, we found a quiet spot and recorded the podcast. It was my first time recording one and I definitely was nervous, but I’ll get better as the whole Texas Wine Lover team probably shares the task of recording podcast episodes. 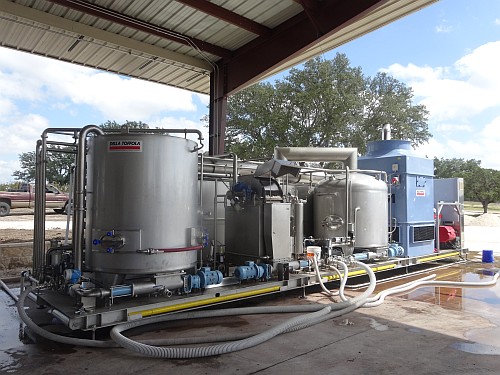 It was off to our next planned appointment which was William Chris Vineyards. I had arranged to meet with co-owner Bill Blackmon for another podcast episode. I was on a roll! We found Bill and quickly recorded an episode which will be available soon. Even though Bill was running a little late for an appointment, he took the time to show us their new estufa where assistant winemaker Joshua Fritsche helps make their Madeira. Inside the estufa is even a tasting bar to enjoy the wine. We thanked Bill for his time and headed to our next appointment.

Our next appointment was not for a podcast recording though. It was for new winery Kuhlman Cellars in which you are highly encouraged to make an appointment so they can provide the best possible experience for you. We had been invited to do a preview of their tasting menu in May and we were excited to do the resulting tasting in their newly built winery. We were not disappointed and had a great experience which we wrote about earlier.

After an enjoyable tasting and food pairing, we headed next to Six Shooter Cellars. It had been a while since we were there last, and since that time winery Texas Legato had joined the Six Shooter Cellars tasting room. We shared a tasting and tried some wines from wineries which aren’t around the Fredericksburg area.

We enjoyed our tasting and it was time to see our friend Vinny Lupo, tasting guide extraordinaire and now General Manager at Inwood Estates Fredericksburg. I had seen Vinny recently at Inwood Estates but Gloria had not, so she enjoyed seeing him again. Of course, tasting the excellent Inwood Estates wines was just icing on the cake. 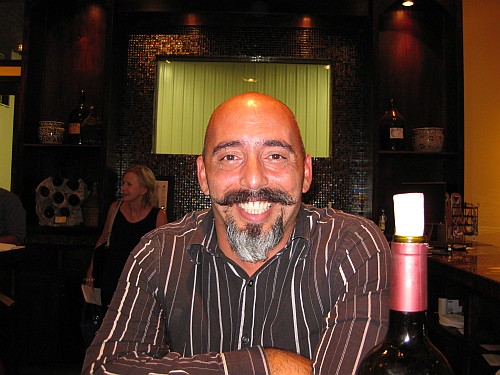 We could finally check into our hotel which was good because we needed to change for dinner. Reservations had been made at Cabernet Grill where we always love eating. The food is great and they have a huge selection of Texas wines. What a great combination! Executive Chef and owner Ross Burtwell follows me and I follow him likewise on Twitter, and he was expecting our arrival. We did not see him in person initially, but the server said the chef suggested a meal for us. Who were we to disagree? What followed was a delicious dinner paired with excellent Texas wine. We then got to meet Chef Ross and had a pleasant conversation. Let’s just say this is probably not the last time you’ll hear about Cabernet Grill here. We can’t wait to visit the restaurant again! 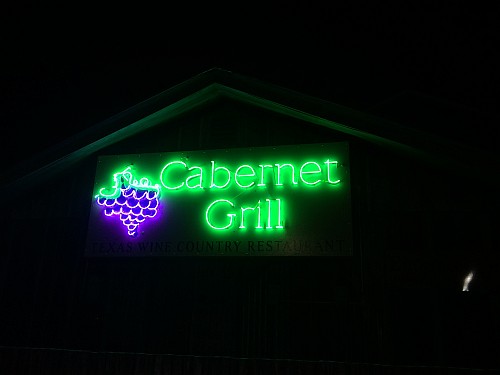 Saturday came and all night we could hear the rain coming down. We had made an appointment at 8 a.m. to take a sneak peak of Lost Draw Cellars, and since the building was still under construction, I was afraid I would be getting a text canceling the appointment. Fortunately that didn’t happen, and unfortunately the rain didn’t stop, but we had a great visit at Lost Draw Cellars meeting both General Manager Matt White and co-owner Troy Ottmers. Make sure you read our preview of the winery because this will be another winner in Fredericksburg!

After a brief rest back at the hotel, it was time to hit the wine trail again. Thankfully the rain had stopped and the first stop was Pontotoc Vineyard which has a tasting room on Main Street in Fredericksburg. We arrived while owner Carl Money was in the middle of a tasting with another couple and he kindly started a tasting for us. Watch the website for more on our visit at Pontotoc Vineyard.

Back up Highway 290 for our next visit was Messina Hof. As VIP members of Messina Hof, it is always a good time at either location. I can’t think of another winery that has a VIP club and I don’t understand why. But we look forward to the upcoming Grapevine location and being treated like part of the “family” when we visit there too.

Onward to 4.0 Cellars which again is always a good bet for some new great wines. How can you go wrong with three excellent wineries in one tasting room? We had the same tasting guide as the last time we visited 4.0 who is Gary Hahne. Gary owns White House Winery which was originally in Navasota, Texas, and we helped him bottle wine before. He told us last time we saw him that he was close to opening up again, and on this visit he said it would be very soon. He also told us where the location was going to be, but we’ll keep that to ourselves just in case there is a delay. There are three tasting sheets which can be selected at 4.0 Cellars and Gloria chose one while I selected another. As usual, both sets of tastings were very good. After collecting our bottles to take home, we saw Cathy Locke of Cathy’s Fine Chocolate who we often see in a tasting room with her wonderful truffles. If a winery/tasting room is looking for something special to offer their customers, Cathy’s Fine Chocolate certainly fits the bill. 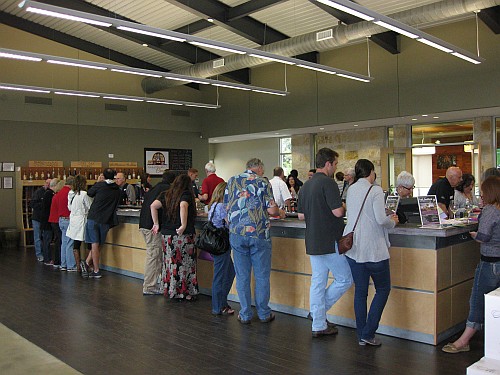 When we were at Grape Creek Vineyards last time, we took their tour. This time we would take advantage of the full tasting offered because of the Texas Hill Country Wineries October wine trail. There was a small tasting bar available in the end of the main tasting room for wine trail customers, so we found a spot to enjoy our tasting. During our visits to the wineries, we were using the TX Wine Passport app on our phone to collect stamps which would lead to rewards. We were surprised Grape Creek was not on the app because they have an excellent gift shop and that is how you use the rewards from the TX Wine Passport program. We had to quickly go through our tastings because we had an appointment (yes, another one) at the next winery.

The next winery was Becker Vineyards and we had made an appointment for the 1:00 p.m. Library Tasting. From their website, the Library Tasting promised a tour of the production area and ending with special library wines in their underground barrel cellar. The session is limited to 20 people and since Becker Vineyards’ tasting bar is usually full on the weekend, this would be quieter and relaxing. General Manager Bret Perrenoud gave the tour and tasting, and we even had the treat of Dr. Richard Becker tasting from some tanks with us at the beginning of the tour. It was a wise choice to do the Library Tasting and we will explain more about the session in an upcoming post. 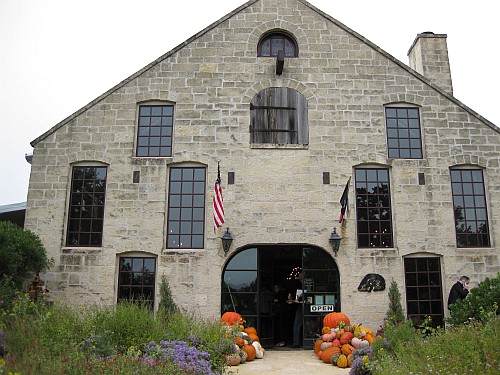 Our last stop of the day was going to be Compass Rose Cellars to enjoy the view on their patio, but since it was on the way, we had to stop at Hye Meadow Winery to see our friends we made before the winery opened on a sneak preview of the winery (hmm, looks like we really enjoy sneak previews of upcoming wineries). Since we did not have time to do a full tasting, we bought a glass of wine and were then told a couple women would like to see us on the patio. We headed to the patio and there we met Judith Raven, owner of Esperanza Vineyard, and her niece Tina Kersten DC. Judith and I had messaged each other earlier in the week about possibly meeting at Compass Rose, but I wasn’t sure if she would be able to make it. In the end, they made the same decision as we did which was to stop at Hye Meadow before ending at Compass Rose. We had a fun and enjoyable conversation with them and winemaker Jeff Ivy before we all had to leave.

Even though Compass Rose was right up the road from Hye, I don’t know how we missed the turn especially since owner Mark Watson had given us a preview (that again!) of the tasting room while it was under construction. But we eventually found the tasting room and joined Judith, Tina, and others who were already on the back patio. Even Sean and Robin English-Bircher of the Vitis Poema blog had joined the group and it was nice seeing them again. It was getting chilly but Mark was prepared with individual blankets for everybody. We enjoyed a full tasting of their wines while under the covers, looking at the view, and having a great conversation with everybody. It was definitely a nice end to the winery hopping for the day and you will hear more about Compass Rose Cellars in a future post.

We now needed some food in our stomachs and have seen many people rave about Otto’s German Bistro in Fredericksburg. We were told it was going to be a 45 minute wait, but it probably was only 10 minutes. We had a nice corner table overlooking the cozy restaurant and enjoyed a nice dinner to end our day.

It had been a nice two days in the Hill Country on the Texas Hill Country Wineries wine trail to celebrate Texas Wine Month. The month isn’t over yet and you can still take advantage of the wine trail, so we would recommend buying some tickets and enjoying some Texas wine.