It’s almost the holiday season and that usually means finding some sparkling wine. But why is Champagne the first sparkling wine somebody thinks of to enjoy that holiday or special occasion? 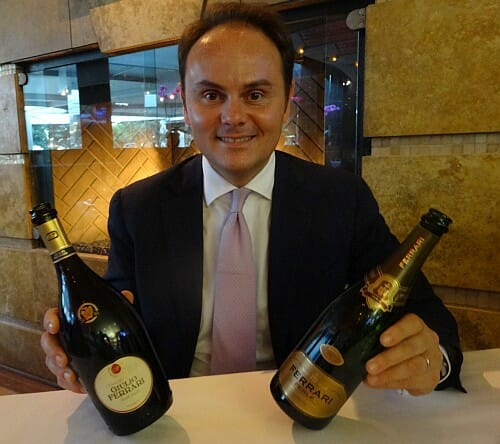 We had the opportunity to meet Matteo Lunelli who is the President of Ferrari wines from the northern Trentino region in Italy. It was his first time in Houston and Texas for that matter, and he had determined to visit Houston because the area is a growing wine market with fine wines.

“Our winery was created in 1902 by a man called Giulio Ferrari which is where the name Ferrari comes from. At that time there was no sparkling wine production in Trentino and there was no Chardonnay, so he was a great pioneer because he started the Trento DOC production and he was the first one to spread Chardonnay in the Italian market. He studied enology in Trentino and then he moved to Montpellier in France where he studied and even went to Germany in Geisenheim at the University of Geisenheim to better study yeast fermentation. Coming back to his own native land of Trentino, he understood the slope of the mountains in Trentino would be a perfect place to grow Chardonnay and Pinot Noir for a bottle of sparkling wine. This intuition is at the heart of the Ferrari style. We are a mountain sparkling wine. All our grapes are cultivated in the vineyards on the slopes of the mountains in Trentino. Being on the slopes of the mountains, we have a very specific style because at a certain altitude we get a very strong difference in temperature between day and night, and this diurnal shifting temperature allows the grapes to maintain acidity and to develop their maturation, and is the key for the style of Ferrari.”

In 1952, Bruno Lunelli took over Ferrari from Guilio, who continued to work in the winery until his death. Since 1969 the company has been in the hands of his sons Gino, Mauro, and Franco. In 2005, there was a change of generation when the three grandchildren Marcello, Matteo, and Camilla became involved.

Ferrari has ensured the Metodo Classico is the only production technique used in their sparkling wines. They do both mechanical and manual remuage (riddling), and do almost one million bottles manually. It’s a tradition they want to keep, but in some areas of the winery where the ceiling is lower, there is not enough space for the mechanical equipment.

We were able to taste four Ferrari sparkling wines. The first was the Perlé which is a Blanc de blanc that retails for around $35. Ferrari produces about 500,000 bottles. 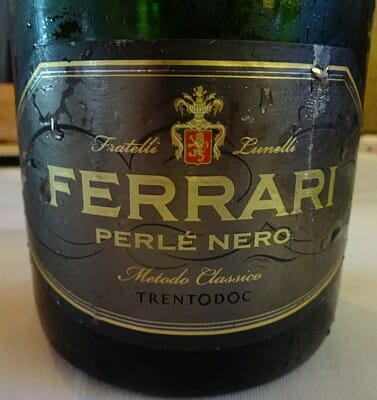 The Perlé Nero was a 2006 which gives it a lot of body and structure, nice complexity, and minerality. 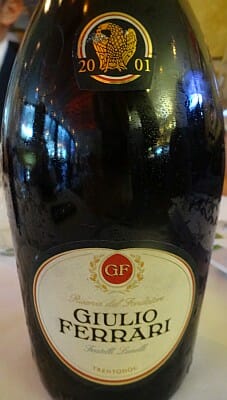 The last wine tasted was the Guilio Ferrari. This is from Chardonnay grapes in the single Maso Pianizza vineyard and is the most awarded sparkling wine in Italy. Lunelli said, “There is a nice story behind this wine. In the 70’s in Italy, sparkling wine was perceived as a wine that had to be fresh and young. At that time, my Uncle Mauro had a very different opinion and knew that Trentino could create a wine which could age a very long time. So he kept some bottles away from the market in secret from his brothers for longer aging. After seven years, he called his brothers and said, ‘I kept some wine and I aged it for seven years. Come and try it.’ Everybody thought it was outstanding. So the brothers said, ‘Okay, let’s start this production.’ The history of the Guilio Ferrari starts with the 1972 vintage and it was a great success. It was the first Italian sparkling wine with such a long aging on the lees and it is really considered the pinnacle of Italian sparkling wine production.”

The Guilio Ferrari retails for $100-130 and only averages 20,000-25,000 bottles overall, but not many get to the United States, so grab it if you find it. We met Matteo Lunelli at the end of the day, and with an expensive wine which had already been open, we were the last to taste it so there was not much sparkling left in the wine, but we could tell that it was wonderful. 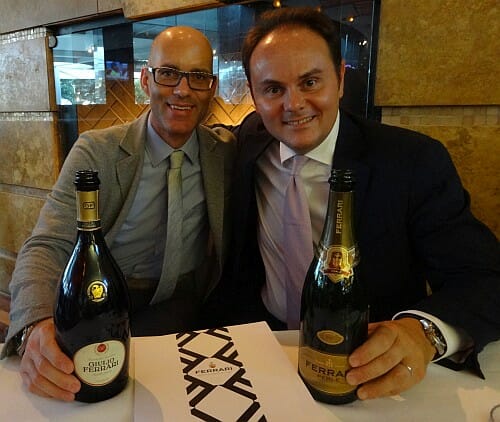