Lone Hen Winery is located in College Station and is owned by Steve and Vicki Kirkpatrick. Their first vines of Blanc du Bois and Champanel were planted in 2004 on their ten acre lot where they live. They continued by planting Cabernet Sauvignon in 2006 and will be replanting with Lenoir soon. They currently have 1.5 acres of vines and will have four acres of vineyard when completed. In 2009, Lone Hen Winery officially became a winery.

We first saw Lone Hen Winery at the Texas Reds Steak & Grape Festival where the wines being tasted were sparkling wines. At the time, they said they did not have a tasting room yet so I decided to wait a while until we would be in the area again to visit. We called in advance recently to see if we could make an appointment to visit the winery. 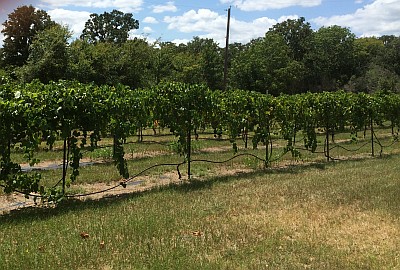 I talked to Vicki Kirkpatrick and she said they still did not have a tasting room but we were certainly welcome to visit. Surrounding their house is a grape vineyard with pear trees and Vicki and Steve welcomed us at their front door. We talked for a little while and they said they make their sparkling wines using the traditional method. Having recently taken the Level 1 Introductory Sommelier Course & Exam, I was familiar with the four different methods used to make sparkling wine, but I did not think the traditional method was being used in Texas when that is the method used to make Champagne and in other locations for sparkling wine. The other method I knew being used in Texas was the Charmat method which involves pressurized tanks.

Vicki and Steve said they were about to do the disgorging and dosage part of the process and asked if we would like to watch. That question did not really require an answer and we headed to their insulated garage which is currently being used as the winery and tasting room, and it also gave us the chance to take video of their process.

To give you a very high overview of the traditional method, primary fermentation is first done by creating a base wine which is light, low in alcohol, and high in acidity. After primary fermentation is complete, the wine is blended with yeast and sugar to create a liqueur de tirage and then bottled. A crown cap, similar to what is used on beer bottles, is used on the wine bottle at this point. Secondary fermentation happens in the bottle and the wine is aged on the dead yeast cells called the lees. The lees start on the bottom of the bottle and during the aging process, the bottle is slowly turned little by little so the yeast cells move toward the neck of the bottle in a process called riddling.

When the dead yeast cells are all in the neck of the bottle, the next step of disgorging is done which is the removal of the yeast from the bottle. The neck of the bottle is usually frozen causing the yeast cells to form an ice cube-like structure. Since the bottle is under pressure from the fermentation giving off carbon dioxide, the crown cap is removed and the frozen yeast is ejected. A dosage is then added to the wine after disgorgement which consists of a solution of sugar and wine called Liqueur d’expédition. The level of dosage or the amount of sugar added determines the sweetness of the finished sparkling wine. The bottle is then usually sealed with a wide sparkling wine cork and wire cage to keep the pressure of the wine inside. More information about the traditional method of sparkling winemaking can be found at Sparkling wine production. 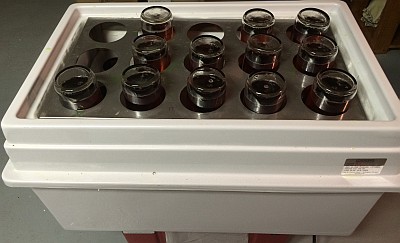 Freezing the yeast in the necks of the bottles

Lone Hen Winery follows the traditional method for the most part with some variations. One major variation is to use alginate pellets for yeast instead of other types of yeast. These looked solid in the bottle and eliminate the slow process of riddling. When Steve explained the pellets to us, he turned the bottle upside down so the pellets floated to the neck and said he just riddled it. Lone Hen filters their sparkling wine three times and the process loses a lot of still wine because of the process of having to refill the bottle with the dosage. To start the process, they must get the wine to 40 degrees which works best. They refrigerate the wines first to make the temperature get there faster. The bottles are then inserted upside down in a cooling system which uses propylene glycol to freeze the necks of the bottles. This step takes about 15 to 20 minutes.

Once the yeast is frozen in the neck, it is time to disgorge the yeast. Steve takes a bottle to a location where the yeast can be ejected safely, disgorges the yeast, and then runs back to the workbench where Vicki waits. The dosage is then added along with any extra wine to fill the bottle and Steve caps the bottle again. At this point they could use the typical wide cork to seal the bottle, but it is easier and less expensive to use crown caps again.

The Kirkpatricks have used the Charmat method before to make their sparkling wines but they decided the traditional method is better and is “just plain more fun.” After watching them in action, we could certainly see why! 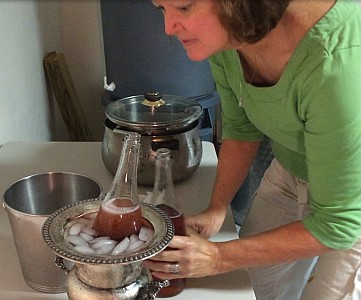 The Rosé wine is made with Blanc du Bois and Muscat Canelli with the Champanel giving the pink color. Coming soon is a pear dessert wine. You can find their wines at local stores and also wine festivals.

Right now Lone Hen Winery is making 100 cases of wine a year and their goal is to make 350 cases. Steve and Vicki are currently both professors at Blinn College. Vicki is a microbiology professor and began making wine in 2001. She will be retiring in December and looks forward to retirement and making wine full-time for Lone Hen Winery.

Be on the lookout for Lone Hen Winery at wine festivals and also in your local stores.