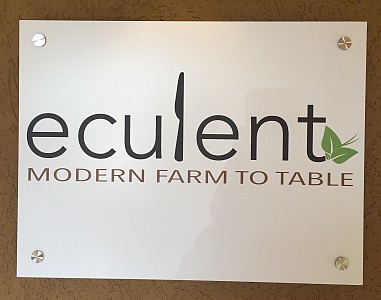 eculent is a fine dining restaurant which will be opening soon at Clear Creek Winery located in Kemah. Chefs David Skinner and Michael Calvino will bring an evening of a multi-course meal which will not soon be forgotten. The restaurant is having test dinners right now so the evening is perfected by the time they officially open on November 7th. A soft opening will start on September 26th occurring only on Saturdays. When the restaurant is open, the hours will be Tuesday through Saturday with one seating nightly starting at 6:00. 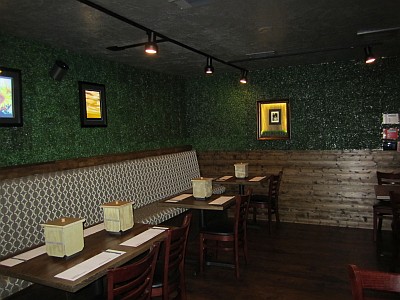 We were invited to a test dinner along with other guests to experience the dinner and provide comments and suggestions. We learned it was going to be the fifth test dinner they had done. The restaurant eculent is located in front of Clear Creek Winery. We were one of the last guests to arrive for the 6 pm seating even though we all were early. Since we were early, David Skinner gave the group a tour of the facilities including their herb garden that is used for their meals. 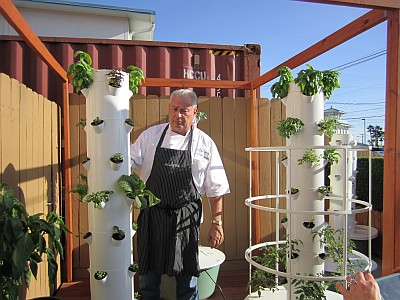 David Skinner in part of the herb garden

Next on the tour was their lab where ingredients are stored along with some of the preparation of foods for the dinners. One guest asked about the name eculent and David said the name comes from the Latin word esculent meaning vegetable. He said, “It’s eculent because I couldn’t get esculent as a URL (for the website) and so I’m the ‘s’ that is missing.”

In the lab is a freeze dryer which is different than a dehydrator, which they also have. Freeze drying the food keeps the exact shape, pulls the moisture out, keeps the flavor, and for the most part keeps the same color. Also present was a rotovap (rotary evaporator), which is a device rare to find in kitchens, and it allows them to extract the essence from any food such as herbs and use it with other foods. It uses a vacuum pump to reduce atmospheric pressure allowing liquids to move to a vapor phase at low temperatures. 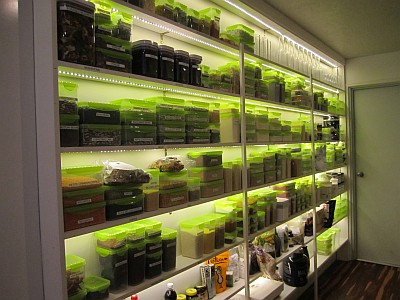 The ingredient library was very well organized and includes about 520 different ingredients to experiment with and by the time they’re done, it will probably be around 1,000 ingredients. With that kind of library, they will be able to make just about anything. 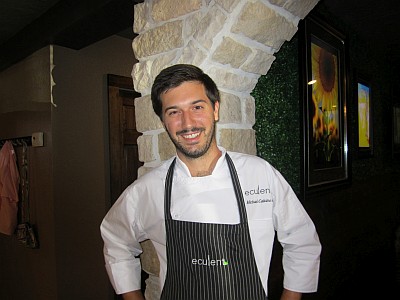 It was time for dinner and we returned to the restaurant where it was explained we were going to have a nine-course meal. When the restaurant is open, each course will have a change in lighting, background music, art on the walls, and even the aromas in the restaurant. Unfortunately, the aroma machine was not ready on the night of our visit.

There would be a choice of three menus for the guest. The first menu would primarily be food sourced within 25 miles, the second Texas menu would be sourced from within 250 miles, and the third Chef’s menu would be from 2,500 miles. We had a choice of the first two menus for the test dinner. The first menu was vegetarian and gluten free while the second menu had meat and other foods. We could select either of the menus, but it was suggested if there were only two people, it might be best for each to select one menu and then both would be able to sample from both menus. We were told we would probably be having food which we had never tasted before, and by the end of the evening, that was correct.

We were told the first course was already sitting in front of us, but the only thing on the table was a box. I don’t want to reveal how the box works, but it was fun! Inside the box were two cookies along with a shrug vinegar based drink to stimulate the appetite. For the rest of the beverages, everyone could select either the restaurant’s choice of wine paired specifically for each course or have just one wine for every course. We decided on the wine pairing.

The second course was paired with the Clear Creek Winery Sauvignon Blanc. One meal had edible dirt made from dehydrated beets, black olives, and pistachios. The other had beef bacon made in house from beef belly cured for a few days and then sliced.

The third course was paired with Pinot Grigio. One of the meals was actually a little zen garden complete with rake and stones in the zen garden. The stones sure looked like stones, but were actually edible potatoes. The gravel could be eaten too and you could also rake it. Who said you can’t play with your food? 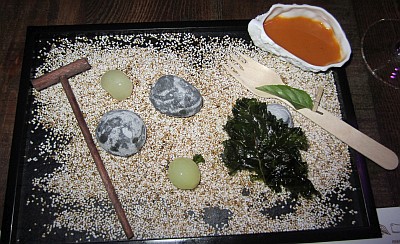 The fourth course was paired with Pinot Noir. One of the meals included a deconstructed quail tamale.

Next came a palate cleanser made with a liquid nitrogen frozen Chenin Blanc with raspberry dust on top. We were supposed to pop it in our mouth and then blow like a dragon’s breath because of the smoke from the liquid nitrogen. The group had a lot of fun trying to do that. 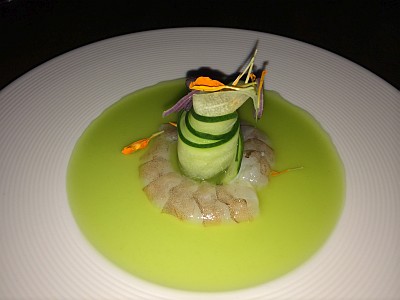 The next course was paired with Cabernet Sauvignon. The vegetarian menu had red camargue risotto with oven roasted scorched cauliflower, while the Texas menu had a beef dish strip loin with baby artichokes and rattlesnake beans.

Next came a course with a small glass of Merlot Port. One menu had Texas goat cheese with prickly pear and jalapeno jam, fried kale, and sweet potato leaves.

A Brut sparkling wine was provided with the next course. One meal was a corn cookie underneath a cereal milk ice cream with freezes dried corn, pea shoots, and freeze dried sweet pea dirt. The other was a sweet potato pie with pecan crust, thyme cream, pecan brittle, and a molasses ice cream that could be shattered with a spoon. 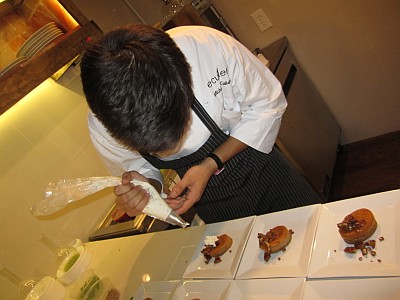 The final course had the delivery of a box about the size of a cigar box complete with a eculent cigar label. We were told the meal started with a box and was ending with a box. The check will be presented in the cigar label box along with two take home desserts. Also included in the box was chocolate from Tejas Chocolate who is the only cocoa bean to chocolate bar chocolatier in the state. Also included were gummy bear bottles made from wine.

The meal had started at 6:00 pm and ended at 9:15. We had tasted many new foods and the imagination on each course was incredible. It was a test dinner which means there could be problems, and in fact there were when the light changes stopped changing between courses. One of the art paintings had stopped changing too at one point.

The one thing that did not change during the evening though was the delicious food. eculent has great potential for a nice fine dining experience in Kemah and we look forward to visiting again when the restaurant officially opens.

The most unusually boring review ever of a concept that should be exciting……
Sounds like a step one step two step three review…We enjoyed dinner at the winery last year…different name now of the venue..but it was overpriced even then for what you get. Look at Perrys Steakhouse or Cullen’s. For the the same price we are served huge portions and end up with take out for another dinner.

I am sorry my review style was not satisfying to your needs. I am not sure how you can compare the fine dining they’re offering to a steakhouse, but then again I’m not a restaurant critic. I have enjoyed other similar fine dining restaurants in Mendoza, Argentina, and what eculent is doing is very similar, in addition to being farm to table.

If you went last year, you did not go to this restaurant. (Just opened in Nov’ 14) Might be the best restaurant in the Houston Area.

We also went as the post said when they were testing out their menu and concept. Definitely agree they were great even then!

Thanks. We look forward to going again!

MENU
wpDiscuz
6
0
Would love your thoughts, please comment.x
()
x
| Reply
Send this to a friend