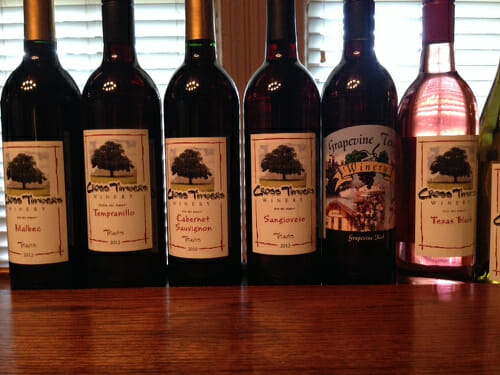 “I’ve told my daughter she should just skip college and come work here. Don could tell her something about everything. I’ve learned so much.”

This was Nora Diemicke’s observation about her boss, Don Bigbie, as she poured me a sip of Cross Timbers Winery Viognier. I had just commented on how much I love good story telling, and earlier I was definitely wishing my schedule had a tad more flex as I walked around the grounds with the tall, rugged fellow in the white cowboy hat, listening to fascinating bits of history.

“Did you know the Franciscans were making wine in Texas long before California? They arrived in Texas in 1692,” Don had said. “And I could also tell you where some of T.V. Munson’s original vines are.”

This last bit was said with a twinkle in his eye so that I dared imagine that, with very little encouragement, he just might show me where. And I was half-ready to go! 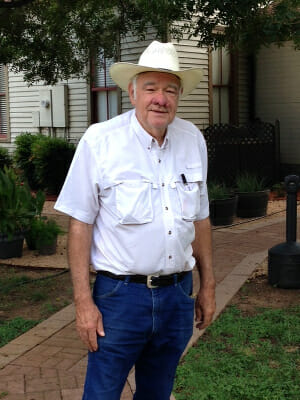 I caught up with Don on a Tuesday, just as preparations for GrapeFest 2014 were fully underway in Grapevine, Texas. Driving down Main, I saw there were already signs for parking and banners advertising what has become the largest wine festival in the Southwest. Don and his staff were preparing for the onslaught, when some 250,000 guests will descend on Grapevine over September 11-14 so they can enjoy music, food, a midway, and, of course, plenty of great wine.

If you’ve never visited Cross Timbers Winery, you most definitely should. It is just about one of the most inviting spots in all of Dallas-Fort Worth, sitting at the end of North Main in Grapevine, tucked away from the hubbub of downtown and surrounded by old oak, pecan, and cedar trees.  There’s a patio, a gazebo, and a barn which has been made over into a fully functioning event facility. In the center of all that rural tranquility, you would never know that one of the world’s busiest airports lies just about 12 minutes southeast of the winery.

If you can catch a few minutes of his time, between the Grapevine winery and his other one down in Fredericksburg, Don can keep you well-entertained. That is if, like me, your favorite wine pairing is a good story.

He first made wine back in the early 1970’s when he was attending college in Kansas, and his interest continued and grew when he moved to Dallas during the 1980’s. Back then, he was working for Braniff Airlines, and he has traveled the world and seen many things—strange, wondrous things like Swiss wine, which he says is actually very good!

When he first acquired the Cross Timbers property in 1998, he had quite different plans for how he would use the land. The historic Dorris/Brock house that is the tasting room is one of the oldest structures in Grapevine, and while it’s a jewel now, when he bought it, it was almost a total ruin.

“Raw land isn’t worth anything. You have to do something with it,” Don said. “My plan was to tear down the house and make a seven-property cul-de-sac.”

But before Don could turn his plans into action, while traveling on business he got a call from his daughter who informed him that the property had been designated a historic landmark, and so his only option was to renovate. So, that’s what he did, doing most of the work himself, room-by-room, board-by-board.

Turning lemons into lemonade—or wine—Don created a wonderful facility that has since seen hundreds of weddings, anniversaries, and other celebrations over the years. Cross Timbers was one of Grapevine’s earliest wineries when the city began its concerted effort to become a wine tourism destination, benefitting all of Grapevine’s businesses in the process.

To pay a call on Cross Timbers, head north on Main past the busy commercial section until you see a rail fence, a gravel drive, and an old cedar tree that has become so embedded and intertwined with a grapevine that the two have grown together—and yet it still makes fruit.