Compass Rose Cellars, a Texas Hill Country Winery, announces the release of their first fortified wine, the 2012 Jaquez. A new, Texas AVA designated fortified dessert wine, Jaquez is available for sale and sampling at the tasting room in Hye, Texas, 1 mile south of US Highway 290 on Albert Road. 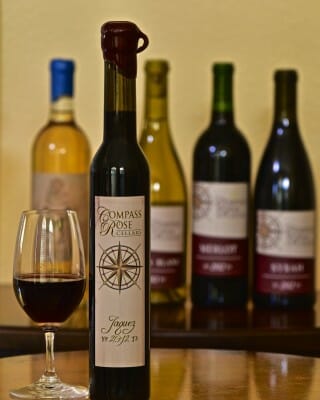 Mark Watson, Owner of Compass Rose Cellars, said, “We are proud to offer our Jaquez this week, just in time for October Texas Wine Month. Black Spanish is considered something of an indigenous grape here in Texas, and there are many examples of fine fortified wines made from Black Spanish. Ours is the newest, and we are excited about the program we have to follow.”

Robert Nida, winemaker at Compass Rose Cellars, said, “Jaquez, or Black Spanish, as it is better known, is a hybrid grape variety that grows well here in Texas. It’s also called Lenoir. It is mostly grown in the Eastern and Coastal regions of Texas due to its resistance to Pierces Disease.”

Introduced just in time for fall and the holidays, the winemaker suggests that Jaquez is “a style of dessert wine I like to drink during the fall and winter nights with a little chill in the air.”

The 2012 Jaquez Dessert Wine was pressed off around 10 brix and fortified with grape spirits. Aged in neutral oak barrels, the wine is now bottled in sleek 375ml bottles with the Compass Rose Cellars signature hand-dipped wax capsule, perfect for gifting and sharing. Just 50 cases were produced.

The Tasting Room at Compass Rose Cellars, is open Friday through Sunday for tasting and relaxing, and by appointment during the week. With a wide back porch and a grand sunset view of the Texas Hill Country, this hidden gem offers a portfolio of 5 wines – 2 white, 2 red, and now the newest, the 2012 Jaquez dessert wine. A special menu of gourmet hummus spreads will also debut the weekend of September 26.

“We appreciate the support we have received from our friends, families, and club members in making our dream become a reality. This wine is for them. Like we say around here, our wine is ready when ‘All you have is time’.”