One of the best things about attending TEXSOM is the education you can obtain. At this year’s 2014 10th annual TEXSOM conference, you could select from four different seminars per three sets of time periods for the two days. It was easy to find a topic you could be interested in. I saw a seminar entitled “Exploring Vermouths and Aromatized Wines” and thought that was kind of different among the usual wine seminars, but since I knew nothing about vermouth, I signed up for the seminar. 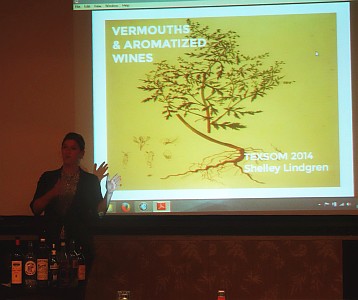 The only thing I knew about vermouth prior to the seminar is seeing a green bottle in the back of a home bar for those occasional Martini drinkers. My thought was confirmed by instructor Shelley Lindgren when she asked, “How many people thought vermouth was only used in cocktails?”

I learned vermouth is actually an aromatized fortified wine usually used as an aperitif wine, one which is served before a meal to stimulate the appetite. As you can tell from the photo of vermouths we were given to taste, there is a wide variety of types of vermouth from white to amber to red. 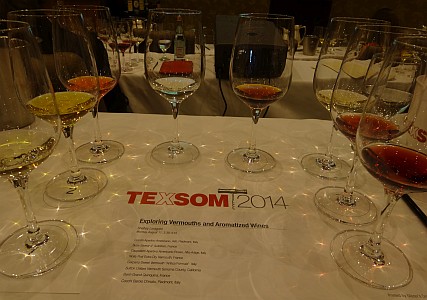 Vermouth is believed to have begun in China as early as the Shang dynasty around 1500 BC. Dry ingredients like wormwood was used to add to the wine. By 1813, Joseph Noilly founded Noilly Prat based in France and started producing their dry vermouths in a green bottle. Since the wines are fortified, the vermouth was 18% alcohol by volume (ABV) and made from the Clairette grape.

French producers typically are known for the lighter, drier white vermouths and Italians for the red, spicy and often sweeter styles. Most producers make both kinds. Dry ingredients consisting of aromatic herbs, spices, flowers, seeds, and many other botanicals are included in the wine. Besides using vermouth in cocktails, they are also served neat or over ice.

In addition to wormwood, another popular botanical used in vermouth and aromatized wines is the gentian herb and root. This was present in some of the vermouths we tasted. As far as the grape and botanical being used, a lot of producers keep their recipes a secret.

The European Union (EU) has guidelines for the production of vermouth. Some of these are:

These are the vermouths we tasted:

We certainly tried a wide variety of vermouths and my favorite was the Byrrh Grand Quinquina. I could not find it in my small liquor store when I got home, but I will find a bottle soon. 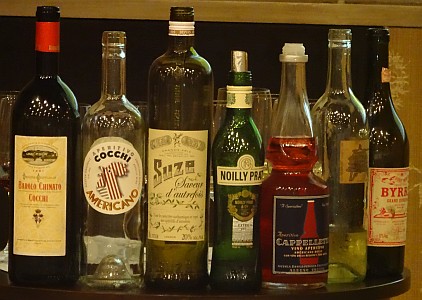 Americano vermouths mean they have gentian root. The Americanos can be served in a bar which only has a beer and wine license. Some foods which can be paired with vermouths are almonds, goat cheese, and cured meats like salami.

Since vermouths are fortified, they can last longer than most wines in the bar. However, once opened, they should be refrigerated and then last for a month at the most. That means all those bottles I have seen over the years which had been opened and were still sitting in the home bar could probably be thrown away. However, a vermouth can be used as a substitute for a white wine in cooking.

I was glad I took the vermouth seminar and now I know something about vermouth other than seeing the popular green Martini & Rossi bottle.

Missed this particular seminar. Thanks for the summary,