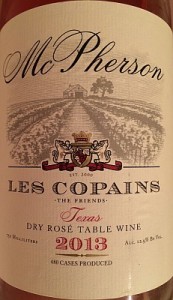 McPherson Cellars has hit it out of the park again with their 2013 Les Copains Dry Rosé.  That should be no surprise as it has been winning awards around the country. The 2013 Les Copains Dry Rosé was a Grand Star winner for a Texas Rosé at the Lone Star International Wine Competition in June, 2014. They followed that up later that month with a silver medal at the 2014 San Francisco International Wine Competition.

I was able to visit McPherson Cellars in May and after a tasting, I got the chance to talk to owner and winemaker Kim McPherson. He wanted to show me a new label he was starting to use which happened to be the 2013 Les Copains Dry Rosé. He asked me what I thought and I said it looked like a French wine label. He quickly replied, “That’s exactly what I was going for!” On the front of the label is a background drawing of Lost Draw Vineyards which provided the grapes and on the back label was a drawing of McPherson Cellars.

I had finished a tasting of their wines at the time so the first time I got to taste the wine was at the Lone Star International Wine Competition. I was pleased to receive a sample bottle later to taste and enjoy.

The wine details are: 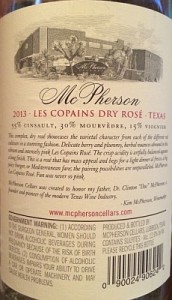 Gloria and I did a tasting and came up with this profile of the pink and salmon colored rosé. After cooling the rosé to a nice chilled temperature, it was time to taste the refreshing wine. On the nose we got pomegranate, strawberry, raspberry, and some tropical banana. The flavor confirmed some of the same aromas with strawberry and banana. Gloria is sensitive to Viognier and said the flavor was bitter and tart, most likely because of the Viognier.

The wine is definitely dry with a medium plus acidity and a long finish. The 2013 Les Copains Dry Rosé is a very friendly food pairing wine and would be good with grilled barbecue and burgers.

We can definitely recommend the 2013 Les Copains Dry Rosé and can understand why it has been winning awards at wine competitions.