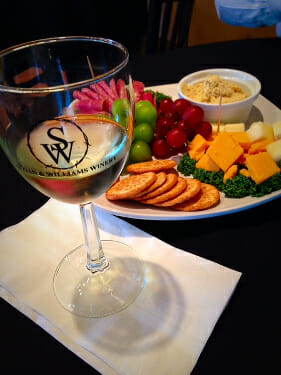 If you’re going to start a winery in a town that’s already rife with tasting rooms and urban wineries, your wine needs to be pretty good, right? Wrong, say Alan Kunst and Ralph Mattison of Sloan & Williams Winery in downtown Grapevine. Your wine needs to be extraordinary.

Alan and Ralph aspire to create wines rich with power and finesse, and they are investing in the grapes, processes, equipment, and connections to make their goal a reality. And from the wines I tasted Monday evening—a Roussanne, a Sangiovese, and a gorgeous medium-dry blend called “Serenity”—I’d say they are well on their way.

I managed to get some time with the new winery owners Monday evening after contacting the delightful folks over at the Grapevine Convention & Visitors Bureau, inquiring about wineries I might feature in advance of GrapeFest 2014. Helpful as always, they directed me to Sloan & Williams (taken from the middle names of the two owners) who had just opened their doors about a month ago.

As reported earlier in the Fort Worth Star Telegram, the two business partners and friends met as cadets in the ROTC program at Tarleton State University in December 1996. I asked them to elaborate on how they first became friends and what drew them to each other.

“From our first conversation, I felt I knew him already,” Alan said of Ralph, “As an only child, I felt as though I’d found the older brother I’d never had.” 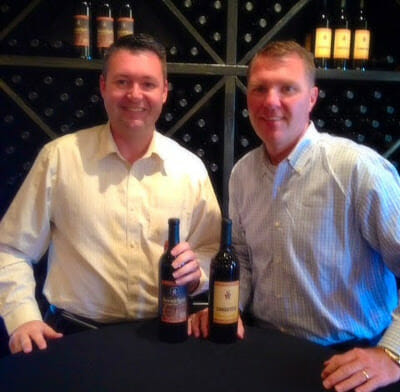 Ralph added that, because they had both already actively served in the military and had NCO experience, they understood the pivotal outcomes of important decisions in a way that their junior classmates didn’t.

“Alan had credibility, and we shared a common language,” said Ralph, “We both understood that sometimes, to be a great leader, you also have to be a great follower. So, there we were, both total Alphas, and yet we were able to collaborate and lead together.”

Their common language and collaborative friendship continued to pull them together year after year, even after they both embraced highly successful civilian careers that eventually set them up to pursue their wine-making enterprise. For a long time, they had discussed somehow going into business together before finally deciding to open the Grapevine winery.

Drawing upon his business experience as well as his knowledge of wine, Alan completed a thorough feasibility study that carefully weighed the opportunities and risks of the venture. Ralph was open to the possibilities, but as he also pointed out, a business where you don’t make money is “a hobby.” And the wine business is a very hard business at times, as the folks out in Napa can attest in the wake of the recent earthquake.

“You take calculated risks where you understand the implications of your actions,” said Ralph, “But you don’t gamble solely on the basis of hunches and guesses.”

Both Alan and Ralph impressed me with their business acumen and strategic approach to wine-making. However, as I sipped my Serenity blend and nibbled some excellent Belton English Farmhouse Cheddar, I couldn’t help but smile as I watched the two military/corporate veterans tell the story of their friendship and their shared love of wine. I saw the way Alan’s eyes lit up as he extoled the virtues of French Oak over American Oak barrel aging because of the ellagitannins (I teased him about “geeking out”).  And when Ralph began talking about the first night the winery was open, I could see it happening before my eyes—something I call “wine sparkle.”

Ralph told me how the Friday they opened, it was all hands on deck with family members and a handful of staff scurrying around, welcoming patrons, and serving wine. Everyone was laughing and talking, and the evening was a fellowship of community and conversation, an outcome that does tend to happen whenever a bottle of wine gets opened.

The guests came in a steady stream as soon as they opened the doors, and by the time they closed shop, tallied the receipts, and tied up loose ends, the long day ended at around 3:00 a.m. That’s when they looked at each other, exhausted but jubilant, and realized—their long-held dream of a shared venture had become reality. It was a defining moment of absolute joy.

Being with the Alan and Ralph and listening to them talk, a little bit of that joy (or “wine sparkle”) rubbed off on me. It was the perfect way to wrap up a Monday—a good glass of wine and a great story of lifelong friendship and dreams fulfilled.