Several Texas wineries will be showcasing their wines at this year’s 2014 TEXSOM (Texas Sommelier Conference) in Irving, Texas.

It was previously announced that Texas Fine Wine will co-host with Texas Monthly a Hospitality Suite on Sunday, August 10, in addition to pouring wines at the Grand Tasting on August 11. Texas Fine Wine comprises the Texas wineries Bending Branch Winery, Brennan Vineyards, Duchman Family Winery, and Pedernales Cellars. Four wines will be poured from the four wineries at the Grand Tasting:

In addition, there will be other Texas wineries pouring at the Grand Tasting.

Messina Hof will be sponsoring the sommelier lunches from Wednesday, August 6 through Friday, August 8. They will also be participating in the Grand Tasting and pouring four wines there: 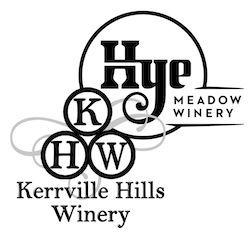 Hye Meadow Winery and Kerrville Hills Winery will be sharing a table at the Grand Tasting and pouring two wines each:

What a perfect opportunity to show off some of the state’s best wines. Best of luck to all!

So pleased Hye Meadow is pouring our Trebbiano!

For my taste, you can’t do better than Kerrville Hills. Glad they are pouring…