An opportunity came up this past week when Republican Senator Ted Cruz from Texas was interested in spending time with Texas wine and grape industry leaders. Plans quickly moved to create an event to be hosted at Becker Vineyards on Saturday, July 12, with participants from Texas wineries and vineyards.

Senator Cruz first toured Becker Vineyards and then participated in a 45 minute round table discussion with the attendees. Representatives from the Texas wine industry present were: 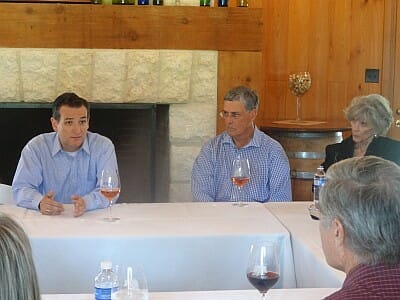 He continued, “In the time I’ve been in the Senate, I have tried to really do two things. Number one, do what I said I would do. And number two, tell the truth. And you would think we should be able to expect that with 535 members of Congress. That should be the bare minimum and I guess it says something about Washington. But I think we need to get back to listening to the people we work for and get back to basic common sense. So that’s what I’m trying to do.” 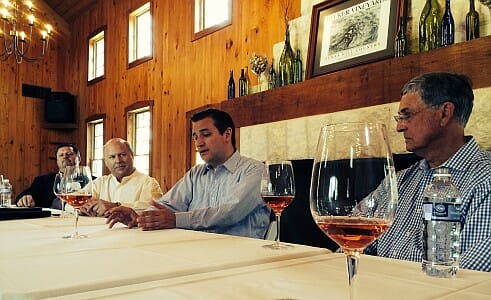 Cruz then suggested to go around the table and have each person introduce themselves and share any issues they may have.

The first topic came up was legislation which restricts shipping wine within state and between states. Cruz stated he does have a connection to the wine industry because he served in the Bush administration in 2001 as the director of the Office of Policy Planning at the Federal Trade Commission (FTC). His office held hearings with ten different industries on barriers to ecommerce and wrote a report on the interstate selling of wines and how it was hurting consumers. The Supreme Court made a decision to make it easier to sell across state lines and the decision referenced their report 12 different times. So Cruz is a big believer in small wineries wanting to compete should have the ability to do so without government getting in the way and restricting the marketplace.

Mike Batek then discussed how he currently has nine employees. He would like taxes to be simplified and flat so he has more money allowing him to hire more employees. Their tax bill is high which also requires him to have a bookkeeper and accountant. Cruz agreed and said that tax reform is very important. Cruz said, “Every year we spend roughly 500 billion dollars on tax compliance. That is roughly the budget of our entire military, entirely wasted on tax compliance. I agree with you we should move to a simple flat tax where everyone can fill out their taxes on a postcard, and that we should shut down the IRS. There’s no reason to have 120,000 employees in Washington targeting the U.S. citizens.”

Bingham Family Vineyards only hires legal workers. If legal immigration was made better, they could then have workers abide by the same laws as the rest of the American public. John Rivenburgh agreed with the point and said they plan on planting 150-160 more estate acres in the next ten years. The biggest hurdle is skilled and unskilled labor which they can hire to do so.

“The reason I am pessimistic is in my view, President Obama and the Senate Democrats do not in fact want to pass immigration. Their objective was to do exactly what has happened, which is to craft a bill that they could run through the Senate and they knew with absolute certainty it would crash and burn in the House because their objective I believe, is partisan politics. It’s a simple political goal rather than actually solving the problem.”

Cruz went on to explaining what he had tried to do and propose on legal immigration which had not succeeded. 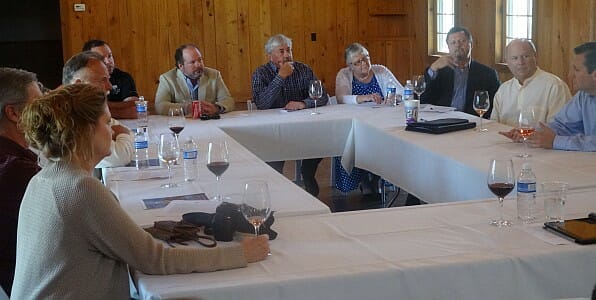 Next Bobby Cox discussed how Texas can make world class wines and all they need is a clean shot at the market. He said everything goes back to the three tier system. His solution is to repeal the 16th, 17th, and 18th amendments at one time because they were simply before the 19th amendment which is when women got to vote. He explained, “We excluded the smartest part of our population on making three critical decisions. That way you reform the Senate, you get rid of the IRS, and you wipe out the three tier system. And you don’t even argue the merit to the case, you just say, ‘The girls didn’t get to vote.'”

That got a big laugh from the round table attendees. Cruz came back with his own little social anecdote which also got a laugh.

Doug Lewis explained how he has five employees and he only uses all Texas grapes. He said he has a great product and a great market, he just does not have enough product (wine). Lack of skilled labor is huge in addition to knowledge among the industry. As an example, he said Washington State shared their education among each other and has made a big impact there.

Jim Evans said his concern is also a lack of skilled labor to manage vineyards. When you have a good vineyard and a lot of grapes, you can get existing wineries to expand and new wineries to start. Doing that also provides more money to the state. It is just a win-win situation for everybody.

Mark Hyman described how Texas wineries are winning Double Gold medals and Best of Class at prestigious competitions and the wines are getting better every year. He wanted to express that jobs are coming with the growth.