Pelle Legna Vineyards and Winery is located in Tyler and is owned by Dawn and Harry Leatherwood. The name of the winery, Pelle Legna, is Italian for “leather wood,” their last name. Pelle Legna is pronounced (pèl-le lé-nah). Dawn decided to use the Italian theme for all their wines too.

When you realize they are in East Texas, one’s first thought is they are not supposed to be able to grow vinifera grapes like that because of Pierce’s disease. When Dawn decided to plant a vineyard and start a winery, she turned to local experts Pierre de Wet and Marnelle Durrett of Kiepersol Estates for guidance. Pierre also grows grapes that aren’t supposed to grow in that area and he has been very successful doing so since 1998.

Pierre told Dawn to grow grapes she likes and then taught her how to battle Pierce’s disease. The secret, which isn’t really a secret, is to add zinc and get the zinc levels higher. Pelle Legna’s vineyard and Kiepersol’s vineyard have different types of soil and are located 40 miles apart. Dawn said since both vineyards have been a success, it shows there is a proven method and she is surprised more people are not growing vinifera grapes in the eastern part of Texas.

Another decision Dawn made was to grow her vines on their own roots instead of using rootstock. Helping in the vineyard now is Francisco Altamirano who is the vineyard manager. That frees up Dawn more as she is also Pelle Legna’s winemaker.

Kiepersol Estates helped produce Pelle Legna’s wine at their winery initially but starting in 2010 in her newly built winery, Dawn has made the wine at Pelle Legna. All the wine made so far has been from 100% estate grown grapes. Dawn started selling her wine June 2013 and 200 cases of wine were produced. 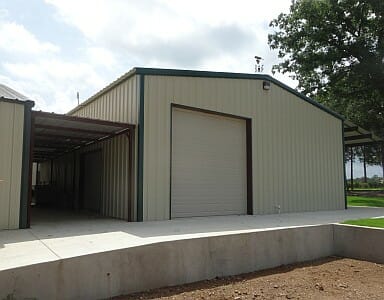 Pelle Legna’s tastings are by appointment only so I made an appointment with Dawn Leatherwood. We arrived at the winery and met Dawn to do our tasting. Currently the tastings are complimentary and there are three wines available.

Tastings are poured from the uncorked bottles. The first wine we tasted was the 2012 Allegro (“cheerful” in Italian). It is made from 58% Sauvignon Blanc and 42% Pinot Grigio. There was a 2011 Allegro and there will be a 2013. They will use the same grape varieties every year but will use different percentages.

The next wine was the 2012 Vivace (“playful” in Italian). This is a rosé made from Cabernet Sauvignon. 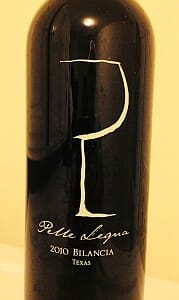 It was time for the red wine which was the 2010 Bilancia (“balance” in Italian). It is a red blend made from 66% Cabernet Sauvignon, 25% Syrah, 7% Merlot, 1% Zinfandel, and 1% Sangiovese. It was aged for 20 months in new French and American oak. The Bilancia recently won a Gold medal for its label in the 2014 Lone Star International Wine Competition and a Silver medal for the wine. 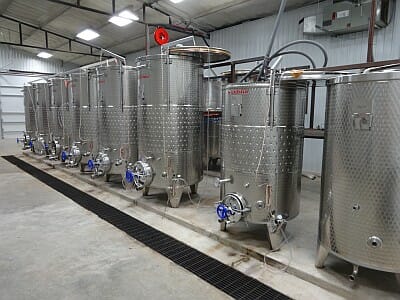 At the end of our tasting, Harry Leatherwood arrived and we had the chance to meet him. Dawn then gave us a tour of the production area of the winery. The big tanks in the winery are used for making her red wines and the smaller tanks are used for the whites and rosés. There is also a barrel room which had a considerable number of barrels. 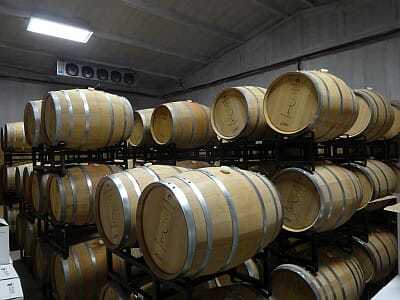 Dawn asked us if we wanted to see the vineyard and of course the answer was yes. Since the vineyard is located a good distance from the winery, we hopped into a four wheel ATV and raced with a dog to the vineyard. Harry arrived soon after in another four wheel ATV. At the vineyard, Dawn explained what grapes were being grown in each of the rows and we ended up at the newly planted Petite Sirah which is Harry’s favorite wine. Dawn also gave Gloria a little lesson in the training of vines which Gloria is currently doing on a few vines in our backyard. 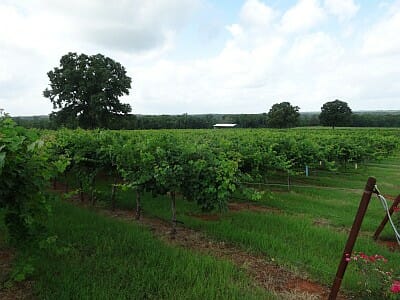 Unfortunately it was the end of our visit, but we promised to make a return trip in the future. We were impressed with the current wines from Pelle Legna and are sure people will hear more about Pelle Legna in the upcoming years. 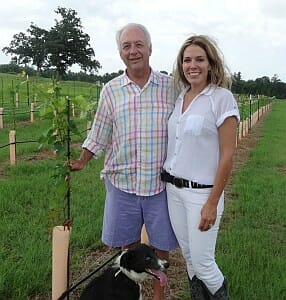