If you saw our previous post about the Houston Rodeo Wine Auction Dinner, we were one of four couples who got together and won lot number 36 which was the “Stars Over Texas.” It was the only lot which was solely Texas wines and showed our group’s support for Texas wine. It included these six liter bottles of wine: 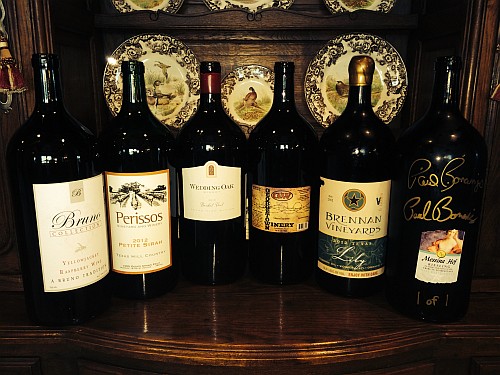 To help you with the calculations, a six liter bottle is eight regular 750ml bottles of wine. That meant there was a total of 48 bottles of wine in that lot.

So it was time to have a party to try and drink these six big bottles. Fortunately there were only three big bottles full of wine whereas the others were empty bottles and included the eight 750ml bottles of wine each. The Houston Rodeo should consider this common practice in the future. A big bottle is great to have as a collectible but of course everybody wants to drink the wine too. By providing the big bottle and the 750ml bottles, it is a win-win situation and the winners of the auction’s lots aren’t forced to try and drink the entire six liter bottle in a few days.

We ended up with a total of 13 people at the party so drinking even three big bottles was a daunting task! Of course at the party was the bidding group which included Bill and Gail Day, Jim and Andi Schier, and Phil and Cici Christian, and us along with invited guests. One couple who was able to come was Paul and Karen Bonarrigo of Messina Hof and one of the big bottles was their Riesling. 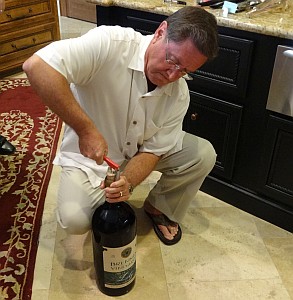 Bill and Gail hosted the evening including providing heavy finger foods to go along with the wine. We started off with Messina Hof’s Riesling and Bill took the challenge to open the bottle. I remember the winemaker opening our previous big bottle struggled, but Bill was able to get the larger cork out quickly, including the two remaining big bottles with ease. 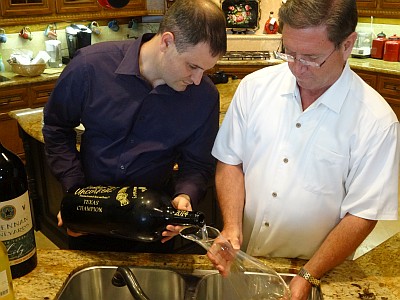 Everybody enjoyed all Texas wines tasted which was nice to see, and some went back to former wines because they liked them so much. We spent almost six hours drinking and eating, but we failed at drinking all the three big bottles. 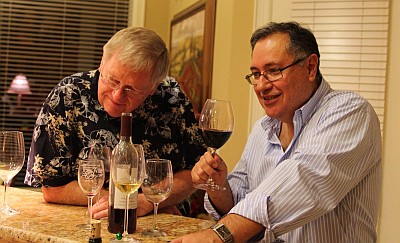 Fortunately I had empty bottles from my first winemaking project at home that I brought, and Bill and I handled the filling of those cleaned and sanitized bottles with the remaining contents of the big bottles followed by preservation gas before corking. Everything was divided up among the buyers and the wonderful evening was complete. 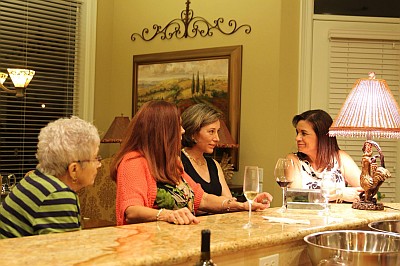 It had been a great evening and if we do it again, everybody agreed we need to have more than one party, not only because there was too much wine, but because everybody had such a great time. 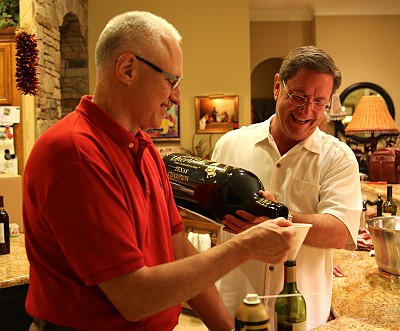