Update: The winery will now be called 4R Ranch Vineyards and Winery

While updating the most up-to-date listing of Texas wineries on the web early last year, I came across a winery which was going to be called BarnHaus Vineyards and Winery. After checking into the winery, I discovered right now it is BarnHaus Vineyards with a winery planned in the near future. I was sent photos of the vineyard and location which looked very impressive.

Coincidentally this year at Newsom Grape Day, I sat next to David Straley who does viticulture consulting. David said he helped with the BarnHaus Vineyard. The name sounded familiar and after I described a photo with a large white house by the vineyard, he said that was the same place. David offered to give me a tour of the vineyard if I was ever in the area and by another coincidence, I was planning on being in that area a few weeks from then.

I looked through my old emails when I got home and found the one from BarnHaus Vineyards and contacted owner Walt Roper. Walt said he or David would be glad to give a tour when I was there and sent me directions to the 4R Ranch, a 1,100 total acre ranch, where the vineyard was located. I would be visiting wineries that same day with friend Dave Potter who is planning on starting his own vineyard, so Dave was excited to be able to talk to another vineyard owner.

Even though Walt had sent me perfect directions via the unpaved roads, Dave and I still ended up getting lost. But we eventually found 4R Ranch and at the top of the hill were the two vineyards and the large white house from the photos I had seen.

Waiting at a lower house on the porch was Walt Roper and David Straley, so it was nice that both of them were able to be there. After meeting everybody, we walked to the house behind the vineyard.

There are a total of three acres of vineyards right now on the ranch. One acre is Viognier and two acres are Cabernet Sauvignon with the latter being in its fifth year. One vineyard was built with nine feet between rows and seven feet between vines. In 2013, they produced 5.5 tons of grapes and sold them to nearby Blue Ostrich Winery.

We entered the house and went to the top porch which overlooks the vineyards. To say the view was amazing is an understatement. The photos do not do it justice with the hills around the area and windmills in the distance. The house itself will most likely be a guesthouse where VIPs could stay and probably special wine tastings held on the top porch.

Walt said he is hoping to do wine production this year from their grapes and if things progress like planned, next year there should be a winery on site. He showed us a road between the vineyards which will eventually be continued up the hill and the tasting room will be built on the top of that hill.

It was a little far to walk from the house, so we jumped into Walt’s four wheel drive and took off using another road to get to the top of the hill. We got out and made sure we didn’t step on any rattlesnakes since Walt said they had found a few clearing the land. That explained what he was wearing on his legs which we learned were snake gaiters.

Walt and David described where the tasting room would be and the views which would be available upon clearing some trees from the surrounding hill. The view of the tasting room will show three surrounding valleys and I could already imagine the view. Even though I have seen beautiful views from some Texas wineries, I think this one could be the best!

Back into the four wheeler and we went to an old barn which has not been used since the Ropers first bought the property 17 years ago. The plans are to convert the barn into the production facility. Even though it is mostly a structure right now, I caught Walt staring at one spot for a while and he confirmed he could see the building already complete. 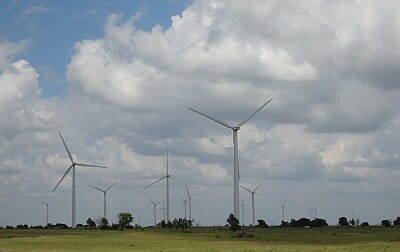 Since there were windmills on the ranch, we drove to some and were able to walk up to one which was moving from the wind. Both Walt and David were surprised the windmills were not moving very fast that day as they usually do. To Dave and me though, it was still an impressive sight to be that close to one. There were 76 windmills on that ridge and yes, we counted them all (just kidding).

It had been a very interesting visit to BarnHaus Vineyards. They have made great strides with the location and the vineyards. Both Dave and I agreed we cannot wait until the winery is complete and are able to go back and enjoy a glass of wine with one of the breathtaking views.