Visiting the High Plains requires visiting some of the top vineyards in the state of Texas. With the number of High Plains vineyards, it is very tough to visit all, so I planned with Bill and Gail Day of Buena Suerte Vineyards on which vineyards to visit. 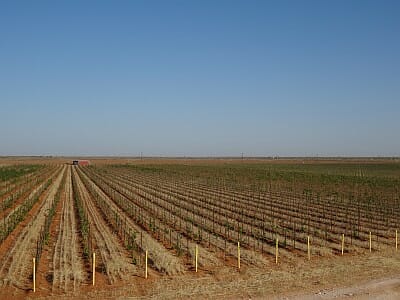 Of course, the first vineyard to visit was Buena Suerte Vineyards. We started our vineyard tour on Thursday, May 8th, over three weeks after a major frost occurred on April 15. Many vineyards tried different methods to avoid the harsh cold which for a long period of time will kill the early blooming vines for the year. Bill said they lucked out against the frost due to delayed bud development in their vineyard.

After having looked at their vineyard in detail, Bill is guessing it will produce 70-80% of “normal” for fourth leaf vines. Part of this is due to a vine death rate approaching 10% and freeze damage to the existing vines. They will know much better in early June as to the extent of the total damage. 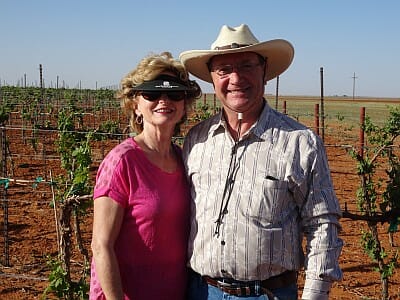 Upon first looking at the 50 acre vineyard at Buena Suerte Vineyards, it looked a lot smaller than what I envisioned 50 acres would look like. My reference was growing up on over 200 acres but that included woods and fields with hills versus a big flat field. Of course when you compare their currently planted 50 acres against their total 640 acres, 50 acres is a small amount.

Between the rows in the vineyard was a tall grass which I asked about since it wasn’t mowed like normal grass usually is. I found out elbon rye is used in vineyards because it breaks the cycle of nematodes which are small, microscopic, worm-like animals that live in the soil and feed on the roots of developing vines. It is also used in the High Plains to keep the sand from blowing. While driving down the road with the high winds blowing, it is very common to see the sandy dirt rolling across the road or even large clouds of dirt causing an almost fog-like moment. However, for those areas where elbon rye has been planted, this is greatly lessened.

After we looked at the Day’s vineyard, we headed to Seaton Farm and Vine managed by Nicholas Seaton, fourth-generation farmer and his brother-in-law Anthony Furgeson. Anthony’s wife, Traci, is the niece of Betty Bingham, matriarch of Bingham Family Vineyards & Farms. Seaton Farm and Vine has 30 total acres of vineyard with 20 acres first planted in 2010 and another 10 acres planted in 2012. In addition they own 5,800 acres of row crows like cotton and peanuts. 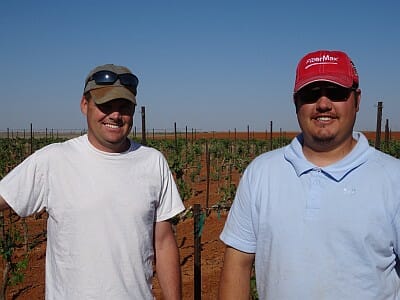 One reason Bill Day wanted to visit Seaton Farm and Vine besides being good friends is both vineyards were first planted around the same time and he wanted to see any damage which occurred during the last freeze. This was of particular interest because Seaton Farm and Vine had tried taking precautions like most vineyards during the freeze. They burned hay bales around the vineyard to raise the temperature and hired a helicopter to fly over the vineyard to push the warm air back to the vineyard.

Helicopters were not unusual during the last freeze as there were over eight helicopters from around the state flying in the High Plains to avoid any frost damage. The helicopter cost had to be paid from whichever city the helicopters originated. Helicopters were flying for both grape vineyards and other crops. 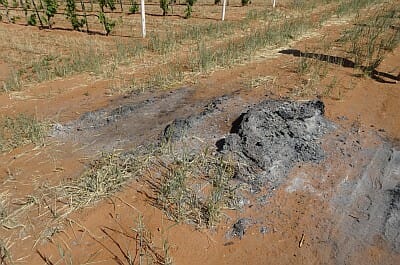 The problem with freezes is it can stop the primary bud growth which then relies on secondary buds for fruit. This makes it difficult for wineries because if some primary buds survive and since you can only do one harvest, that means the harvest is getting different Brix levels because of the primary and secondary buds.

The Seaton Farm and Vine vineyard looked very good and the Days were impressed with the trunk growth from the past years. We learned they had planted the vineyard one year before the Day’s vineyard. One possible reason Nicholas said was because of the great growth of the NovaVine vines they had planted.

It was interesting how one part of the vineyard’s current growth looked good but further up the row on a slight incline, the growth was much more. Nicholas and Anthony surmised that the difference was the soil. The clay soil on the higher incline was getting more abundant leaves than the sandier soil.

Seaton Farm and Vine currently grows Tempranillo, Orange Muscat, Viognier, Roussanne, Malvasia Bianca, and Muscat Blanc. Nicholas could not express enough how happy he is growing Roussanne as it is the easiest growing variety with low maintenance, and fortunately he likes the resulting wine too! 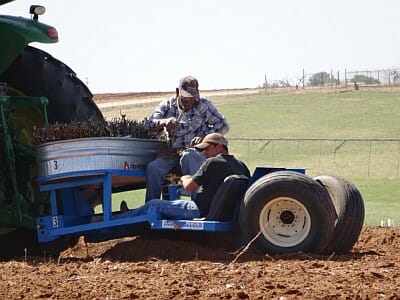 They are in the process of planting an extra 12-15 acres in another area of Brownfield which we happened to stop by later and caught them in the midst of planting.

Our next stop was Lost Draw Vineyards owned by Andy Timmons. We had originally arranged with Andy to meet him at another location but he told us to come to his primary vineyard since he was about to give a demonstration of his wind machines. 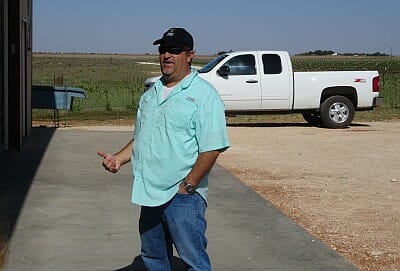 Andy had installed four wind machines as an experiment to help protect against any freezes. The freeze did come on April 15 after he had them installed. When we pulled up to Lost Draw Vineyards, we could tell immediately the vineyard was looking great. 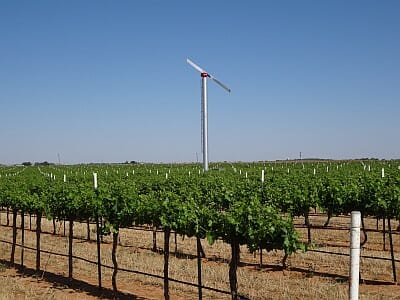 One wind machine can handle ten acres and they are around $35,000 installed. A wind machine can be bought outright or they can be leased like Andy Timmons did. As we could tell from looking at the vineyard, Andy estimated he got back six times the cost of the lease in the fruit saved. Obviously saving anything above the cost you pay is what you want.

It was time for a demonstration and the wind machine was started at a slow speed and then increased. The wind machines are powered by propane and can run full throttle at 2,650 rpm. The fan starts to rotate and in five minutes, a full 360 degrees of the vineyard is covered.

Our next vineyard to visit was also part of Andy Timmons’ Lost Draw Vineyards. You may have heard about the 400 acres of vines which were planted earlier this year. It was a joint venture between Andy Timmons and Matt Adams. Matt Adams is known for getting things done on a huge scale and planting 400 acres certainly fulfills that requirement.

We received directions from Andy on how to get to the 400 acres which we then learned was actually three separate locations of 240 acres, 80 acres, and a final 80 acres. Unfortunately about 20 acres did not make it so they will need to be replanted. It had taken five straight weeks of planting to plant all the acreage. Andy said they planted “Alicante Bouschet to Zinfandel and everything in between.” 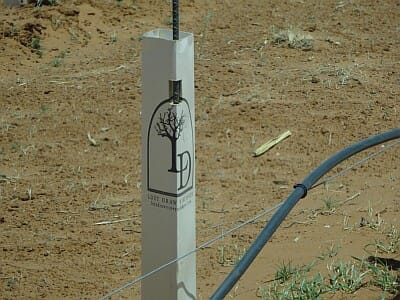 We decided to head to the largest lot of 240 acres. When we arrived at the location, we discovered the 240 acres was split between the road with 160 acres on one side and 80 on the other side. A large storage building was also there to house the equipment. Frank, an employee of Andy’s, came to talk to us and tell us a little about the vineyard. The vines are planted ten feet apart with five feet between the vines. Down the biggest side of the vineyard is half a mile long!

All we could do was just stare for the longest time at this vineyard in amazement. White grow tubes had been placed around the young vines and it almost looked like a cemetery similar to Arlington Cemetery. It was so large we could not see the other side of the vineyard. Bill drove around the entire large vineyard and the photo here is from the backside of the vineyard looking at the storage building. It was definitely a huge feat and without a doubt will help the Texas wine industry. 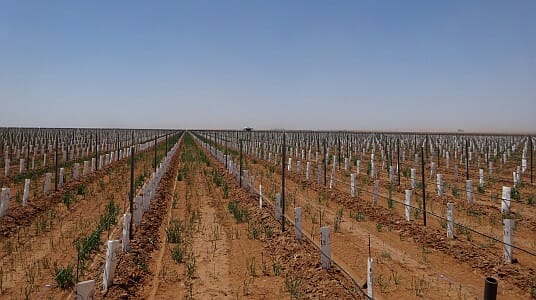 Even though this was the last vineyard we visited, I did talk to Cliff Bingham of Bingham Family Vineyards & Farms to see how they had fared during the last freeze. Cliff told me they are estimating a 10 to 20 percent loss because of the frost which is a lot better than they had anticipated originally.

Fortunately the late freeze was not as bad as last year’s 2013 May freeze and the High Plains should be producing more fruit this year for the state.