Solaro Estate is located in Dripping Springs and is owned by Barbara Haderlein and business partner Robert Fritz. When we last visited Solaro Estate in 2012, we were told they would be opening a Houston tasting room and we couldn’t wait to visit. It has been a long wait, but that time finally came this past weekend when we attended their grand opening. 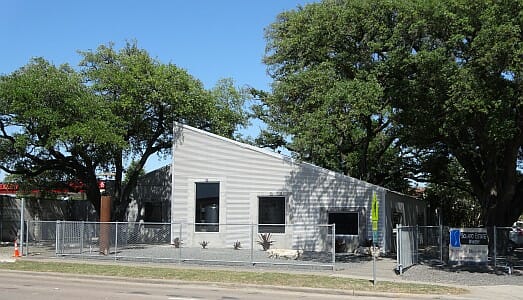 People could make reservations and times were listed at 3:00 pm, 4:00 pm, and 5:00 pm. It wasn’t clear until we reached the winery at 3:30 pm what these times exactly met, but it meant we would wait until the 4:00 pm tasting time for the tasting bar which should have been free from the 3:00 pm tasters. Tastings took a little longer than an hour, but the staff took great care of everyone waiting by starting them off with Solaro Estate’s Chenin Blanc 2013 which had recently won Gold at the 2014 Finger Lakes New York International Wine Competition. Hors d’oeuvres were also available for people.

We asked the staff member who greeted us what the holdup of opening was and the explanation was getting the correct permit. Houston couldn’t decide to classify them as a wine bar, liquor store, etc. before they finally got it right with a winery permit. 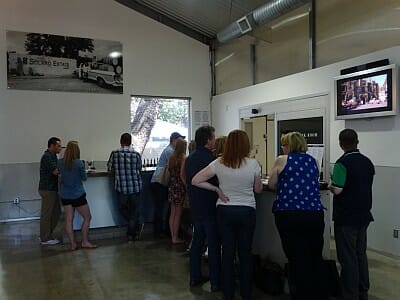 Both Barbara Haderlein and Robert Fritz were there helping any way they could whether it was doing a tasting, greeting people, making sure people had wine in their glass, or giving a tour of the winery. At the start of our tasting, we were introduced to Robert who we had not yet had the pleasure of meeting and he gave us a tour of the winery. Barbara briefly joined us for a photo-op and she remembered us taking the photo of her with their award winning 2010 Tempranillo when we were in Dripping Springs last time. 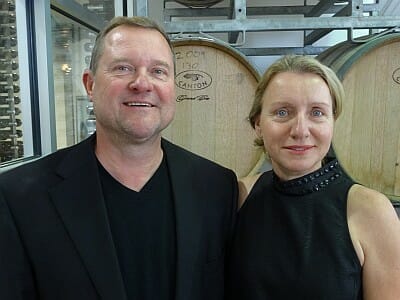 Robert said they will be making some of their wine at the location in small lots and most likely it would be the reds. Some of the library vintages from the winery will be kept in Houston in the library cellar room. He said in 2013, they produced 6,000 cases of wine. Earlier we were told by a staff member that they are now making 12,000 cases of wine. Even though they have now had their grand opening, there are still plans to enhance certain rooms like the library cellar room. That room will also include some Port barrels.

To increase the production of their Texas wines, they will be expanding their vineyards in the High Plains with more grapes like Tempranillo, Chenin Blanc, Sangiovese, and about an 18 acre expansion at the Solaro Estate winery in Dripping Springs.

We unfortunately then learned there are not going to be regularly scheduled hours for the winery in Houston. The current plan is by appointment and for wine events. Houston has a number of Solaro Estate Premium wine club members and by having the winery in Houston, they will be able to support those members better.

We thanked Robert for his time and went back to the tasting. We missed the first round which was the Chenin Blanc 2013, but we had already enjoyed it when we first arrived at the winery. The order of wines we tasted were: 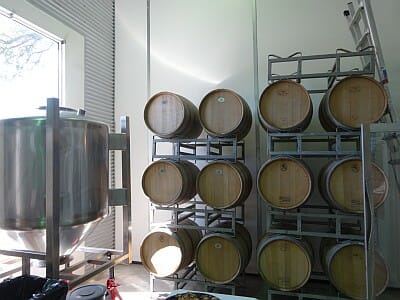 Even though we had hoped to have a local winery where we could enjoy their wine on a regular basis, we had an interesting learning experience and fun visit at Solaro Estate Winery – Houston.