The Oswald Vineyard is located in Brownfield, Texas, in Terry County of the High Plains. The Oswald Vineyard is owned by John and Dina-Marie Oswald. They may not have the largest vineyard in the area, but they have one of the most unique and interesting stories among Texas growers. Other growers I have talked to have called the Oswald’s story a story of grit and determination, and a family who has sacrificed more than most growers have ever thought about doing. It is time to let Texas wine consumers appreciate their story. 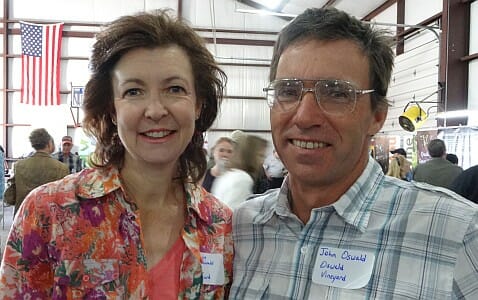 John and Dina-Marie Oswald both grew up in Georgia. Dina-Marie was born and raised in Macon while John, although technically born in Berlin, Germany, returned at one month old to Columbus which is where he was raised. The two met at a college Bible study in Atlanta, Georgia, and that is where the start of the Oswald family begins.

The Oswalds got married in Georgia, had children, and after four years, moved in 1988 to Alabama. John built their almost 5,000 square foot home about 40 minutes from Mobile, Alabama, where they lived for 20 years except for a job transfer to Switzerland for four years. John was a chemist for a chemical company and they lived a very satisfying corporate lifestyle.

John is from a family of twelve children and Dina-Marie thought before meeting John that four children was a large family. Before they were married, they had a number in mind of how many children they wanted, but as they started having children, they realized what a blessing they are. They had nine children in Alabama and today have ten children: seven boys and three girls. The youngest child is five years old and soon there will be seven grandchildren.

Their children were musically inclined and the family looked for a bluegrass music camp in which all different instruments (fiddle, guitar, banjo, and mandolin) were taught and played during the same week. On the east coast most camps had one instrument per week. They discovered a bluegrass music camp in west Texas which provided what they were looking for and took a family vacation there in June, 2005.

At that camp in Levelland, their eldest son Tyler met his future wife, Jessica Bingham. Jessica is the daughter of Cliff and Betty Bingham from Bingham Family Vineyards & Farm. After the Oswalds were around grape farming during Tyler and Jessica’s wedding in 2006, they had the desire for a lifestyle change. They were still living the secure corporate lifestyle in Alabama but when things started changing at John’s company, they decided it was time for the lifestyle change.

In 2008, the Oswalds made that change and moved their family to Brownfield in west Texas to a much smaller house to start a vineyard. It was a drastic lifestyle change because they went from the security of a regular paycheck and took a crash course in frugality. The worst part was when they put their house in Alabama on the market, a housing crisis soon came so they could not rely on the profit from selling their house. It took five years for the Alabama house to finally sell. During that time they were funded by all their savings and cashing in their retirement fund.

The best part of the lifestyle change though was they were now able to live and work together as a family. Even though times were tough, they loved the change. Animals were raised for sustenance like milk cows, steers, and chickens.

During this time, Dina-Marie started a blog called Cultured Palate telling the stories of their new experiences plus food recipes and techniques. The blog and Facebook page became very popular but recently Dina-Marie has decided to reduce the amount of time spent on it to spend more time with her family.

Oswald Vineyard was started by planting 5 acres with two varieties, 15 acres in 2009, and have been increasing the vineyard size since then. Today they have 27 producing acres of 32 acres planted with five different varieties: Montepulciano, Aglianico, Roussanne, Petit Verdot, and Moscato Giallo.

The Oswalds started by renting a harvester but after the one they usually rent broke, they decided to put the money they normally used for renting the harvester toward buying their own. They ended up buying a Pellenc 4560 grape harvester which is a multi-function mechanical grape harvester.

Two years ago, on a tour of the High Plains vineyards, we met the Oswald’s eldest son, Tyler Oswald, at his vineyard. In my recent visit to the High Plains, I was invited to the Oswald’s house for dinner and got a chance to see Tyler again along with John, Dina-Marie, and the rest of their family. It was a pleasure meeting everybody and along with meeting the lovely Oswald family, I was able to ask some questions. 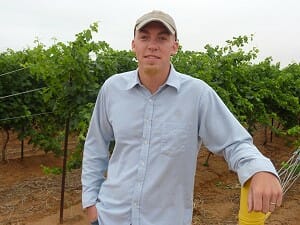 Since the house in Alabama had sold, I asked John if he was still planning on building a new house overlooking the vineyard. He replied that he was and had already built the concrete slab. When the vineyard work slows down, they will put up some walls and expand on top of the current house too. Dina-Marie also gave me some tips on how to increase my readership and the number of Likes on my Facebook page.

I had an enjoyable time learning about this wonderful family and also being able to join them all in person. Next time you are enjoying a Texas wine from one of the wineries they sell to, take a look at the label and see if it came from Oswald Vineyard.