It seems every time Llano Estacado Winery has been in Houston to do wine tastings at our nearest H-E-B supermarket, local Houstonian Bill Freidhof, Vice President of Sales & Marketing, was present along with Assistant Winemaker Jason Centanni. Jason has also been present in our past #TXwine Twitter Tuesday tastings when Llano wine was included. Last year after one Twitter Tuesday, he tweeted me to let him know when I would be in Lubbock next time and we would do some barrel tastings. I didn’t forget that so I arranged with Jason when I would be stopping by.

I arrived with Bill and Gail Day of Buena Suerte Vineyards and Jason met us in the tasting room. Gail had never been to Llano Estacado Winery, so Jason gave us a similar tour as I have received before. As you enter the winery from the tasting room, there are a number of tanks where Llano uses micro-oxygenation. This is a process which introduces oxygen into the wine in a controlled manner. One of the supposed benefits with red wine is when used with oak staves or chips (Llano uses oak staves) is to decrease the aging process while still providing the oak barrel flavors. Jason is not convinced that it actually does that yet because if the wine has a lot of tannins and a lot of color, it will need more time to “come together.” He does like the ability to control the tannin development using micro-oxygenation. 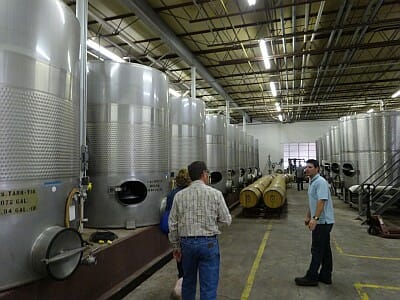 Llano Estacado Winery has a half million gallon capacity at the winery and there were tanks all over, including a building in the back which housed some of the largest tanks. Jason said in a good year, they can crush 10,000 tons of Texas grapes but they need 3,500 tons to sustain the wines they need to make. Jason said, “We’re not here to make California wine. We’re here to do everything we can to make Texas wine. We know it’s a long process to get the vineyards up and going and have them be able to do it consistently year after year, and we’ll do everything we can to support that.”

Jason said the winery has a sweet wine connotation, but they are making some newer types of wines to show they have the ability to make some outstanding dry wines. But when their biggest seller is Sweet Red and they sell 65,000 cases of that a year, it’s difficult to say they are not going to make sweet wines. Out of all their wines sold, they sell 90% in Texas and the surrounding states.

We arrived at their bottling line and the older bottling machine can handle 60 bottles a minute, although Jason said they would like to be able to bottle 80-100 a minute. The bottling line runs three to four days a week.

Next was the barrel room with the eventual goal of barrel tastings. Llano Estacado Winery used to have around 1,000 barrels but they are down to around 600 barrels now primarily because of the micro-oxygenation. They use around nine different coopers for barrels with both French and American barrels being used. 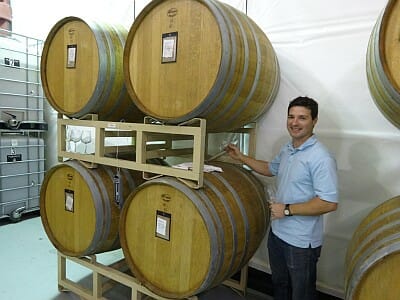 Our first tasting was a blend of 70% Roussanne and 30% Viognier. Jason provided a dumping glass for us but the only person I recall dumping was him! Two popular wines for Llano has been Viviano and Viviana. Viviana is the white version blend and we tasted the next version out of a flex tank. The blend was 50% Muscat Canelli, 25% Pinot Grigio, and 25% Sauvignon Blanc. Viviana has always been one of my favorites and this version was going to be just as good as the previous ones.

Other tastings included a 100% Sangiovese and a 100% Tempranillo. The last tasting was a 2013 100% Montepulciano which came from a neutral barrel. Both Gail and I have enjoyed Montepulciano in the past, but this one we wish we could have bottled right then and bought some to take home! 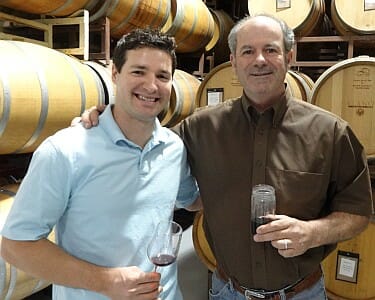 During our tastings, Greg Bruni, Vice President of Winemaking, stopped in the barrel room. I met Greg at last year’s Newsom Grape Day but Bill and Gail had not had the pleasure. During my trip to the High Plains, I also met President and C.E.O. Mark Hyman and Winemaker Chris Hull. 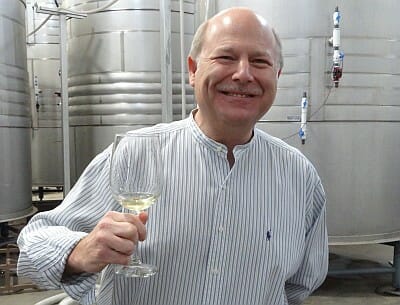 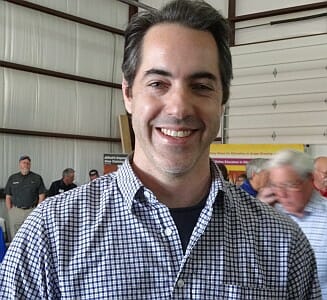 We thanked Jason Centanni for his time and the very enjoyable time we had with the barrel tastings. I will certainly be looking for some of those wines coming out in the near future!