Gloria and I were the highest bidder in the silent auction of a season pass for the Texas Hill Country Wineries at the 2014 Texas Wine & Grape Growers Association annual conference in February. The month of April came and it was time to take advantage of the Wine & Wildflower Trail. The kick-off tasting to start the first day of the trail was held on Friday, April 4th, at Perissos Vineyard & Winery.

Fortunately we were both able to get the Friday off since it would be over a three hour drive from Houston to Perissos Vineyard and Winery where the kick-off was to start at 6:00 pm. The April Wine & Wildflower Trail came with two packets of wildflower seeds and we had chosen William Chris Vineyards as our pickup location for the seeds.

We arrived at William Chris and ran into both owners Chris Brundrett and Bill Blackmon. They tasted some of their wines with us and both remarked how a couple wines were tasting better with just a little age in the bottle. We couldn’t agree more. We then fortunately had the pleasure to do some barrel tasting. 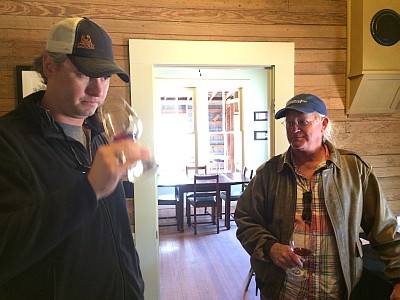 We commented how their wine sells out fast so they need to make more. Their production has increased and are making 8,000 cases a year now, but a lot of the wine goes to the Hye Society wine club members. A Syrah, for instance, will be available probably only for wine club members. Chris then mentioned a sparkling wine they had just made and if we would be interested in trying it. Uh, yeah, it didn’t take too long to respond to that question. 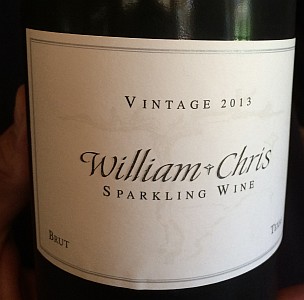 After going back into the tasting room, Chris opened a bottle and along with the William Chris staff, we tasted some of their new sparkling wine. It is a Blanc du Bois made Brut style, and yes, it was good.

Chris mentioned he was going across the street to the Hye Market for some lunch and welcomed us to join him. Since we had recently eaten there, it again was a no-brainer for lunch.

We went to Hye Market, picked out some sandwiches, and Chris brought a bottle of wine to enjoy with lunch. We ate a great lunch along with some fun conversation with Jason Cook and others about potential Hye improvements. Trust me, if the idea ever comes through fruition, you’ll be joining everybody else and climbing aboard the bus.

It was time to head towards Perissos for the kick-off but first we had to make a stop at Westcave Cellars since it had been awhile since we were there last. 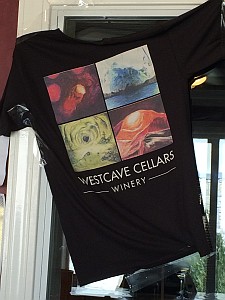 We arrived at Westcave Cellars and owners Allan and Margaret Fetty were working in the vineyard. We started a tasting of the new wines we had not tried before and the Fettys came in from the vineyard to do a little tasting with us. Since they had been working in the vineyard, they requested not to have any photos taken of them so we respected their wishes. The wines were good when we were there last time, which we realized had been over two years ago, and even better now. I had previously tried stopping a couple times at the winery on the way to somewhere else, but the hours were not correct so I usually stopped to take a photo of their vineyard through the fence.

Allan let us try a couple unfinished wines and we offered our opinions. Westcave Cellars is one winery you must stop at when you are in the area as they are just getting better and better. We said our goodbyes and left for Perissos.

We arrived at Perissos Vineyard and Winery a little after 6:00 pm and there were a number of cars already there. January Wiese of Texas Hill Country Wineries checked us in and we received our wine glass and tasting tickets.

With Perissos recent expansion, the wineries of Wedding Oak Winery, Texas Legato, Stone House Vineyard, Fall Creek Vineyards, Flat Creek Estate, McReynolds Winery, and of course Perissos were able to spread out in the new addition to the winery and also outside on the lawn and front deck. Even though the event was sold out at 100 people, it was not crowded at all because of the ability for the wineries to spread out for their tastings. It was a beautiful night to enjoy some great wine.

A food truck was available for food if you were hungry, and we did take advantage of that opportunity. 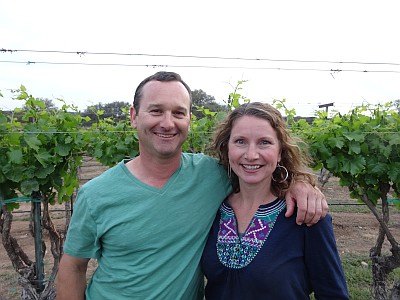 We enjoyed tasting whatever wines the wineries had available and meeting people from the wineries we had met before. Seth and Laura Martin from Perissos were magnificent hosts for the event as they mingled with everybody who attended.

Seth gave us a brief education on the vineyard and how it was coming along this time of year while others were able to also listen and learn. Later in the winery, he told us a little about their expansion and how they could make 12,000-15,000 cases a year now. 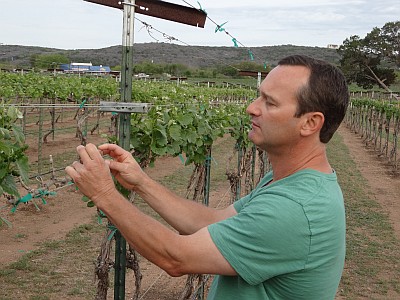 It had been a fun and educational evening and we highly recommend going to one of the future kick-off parties if you are able. There is still time left for this month’s Texas Hill Country Wineries Wine & Wildflower Trail so get your tickets while you can!