The 30th Annual Wine & Roses Festival was held at Messina Hof Winery & Resort in Bryan on Saturday, April 26. The festival marks the budding of the vines and blooming of the roses at the winery. 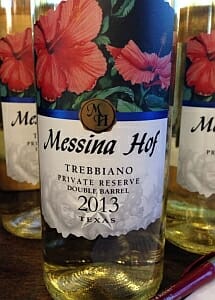 The weekend started off though Friday night with the Spring Release Dinner. Everyone enjoyed a reception with three Messina Hof wines while looking over silent auction items and musician Haley Cole playing in the dining area. It was then time to sit down for dinner. Paul M. Bonarrigo and Karen Bonarrigo welcomed everybody and would explain the wine and food pairing before each course. The following are the four courses we enjoyed:

We were particularly interested in the Trebbiano 2013 since it was the first Trebbiano Messina Hof has made. It also happened to be made from the grapes grown in Buena Suerte Vineyards which is owned by our good friends Bill and Gail Day who were also sitting at our table during dinner. The wine was as great as expected and paired well with the artichoke heart.

After the entrée which was paired with the Limited Reserve DRZ, a three liter bottle of the DRZ was auctioned off with Paul being the auctioneer. The bidding was going back and forth and stopped abruptly when the winner doubled the bidding and said $1,000. That will be a prized collectible since it was the first bottle of DRZ which was made. The proceeds from the auctions (over $4,000) and portions of the festival were donated to the Brazos Valley Museum of Natural History.

Dessert was finished and the evening was complete. It had been a wonderful dinner complete with great wine, food, and friends. 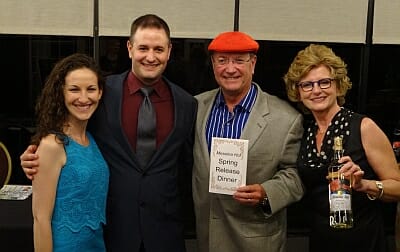 On Saturday, the actual festival started at 2pm but if you were Messina Hof VIP members like we are, you got a two hour head start on the festivities at the VIP reception which started at noon. One thing we learned from Paul M. Bonarrigo is that Messina Hof has contracted 915 acres of Texas grapes and there was 4,400 acres planted in Texas. This year there should be at least 5,000 acres and some people are hearing possibly 5,500 total planted. 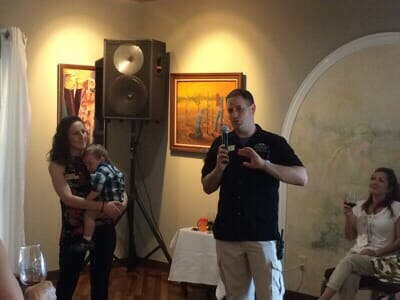 A full day was scheduled and attendees could participate in any events and activities planned. At 2:00 pm, check-ins happened for the ever popular grape stomp competition and the celebrity grape stomp began.

While that was happening, live music with Joe Teichman started. Other musical artists during the day were Haley Cole and The Rock-A-Fellas. The mayor of Bryan was on hand to proclaim the day as Messina Hof Day.

The grape stomp competition started and the groups of organized teams were stomping away at the table grapes (we don’t want to waste Texas grapes!). 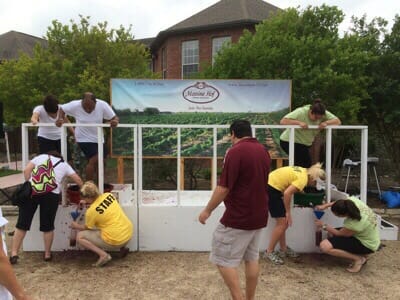 For those not watching the grape stomping, local artists and vendors were present showing their wares.

There were different ticket packages available for the festival and one included passes to Printing with Pinot Noir. This was a printing demonstration hosted by the Artists Screen Cooperative from Austin, TX and was held in the barrel room. This involved screen printing like you see on t-shirts. There are different types of inks used for screen printing where some prints come off a t-shirt after a few washings and some seem to last forever. The demo was printing with ink which had Messina Hof Pinot Noir included in it. Why you would use a good bottle of wine is beyond me, 🙂 but it was interesting to see how the process worked. 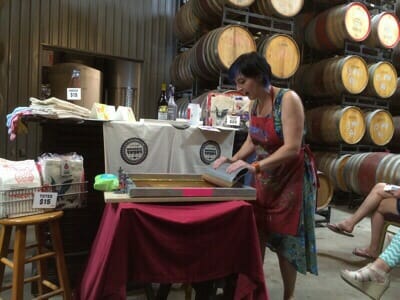 Another class was the wine & chocolate pairing led by Karen Bonarrigo. We tasted three wines paired with three chocolates. Unfortunately you could tell people had been drinking wine during the day and the class was very noisy instead of being quiet while Karen was talking. Again it was interesting with the different pairings. 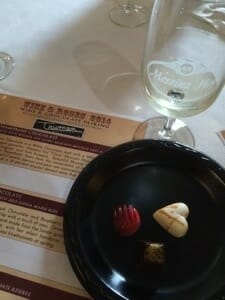 New this year was the “Tweet Spot” which was an exclusive social media lounge where you could tweet away (the Bonarrigos are big fans of Twitter) and use other social media. You could also taste the new Spring Release Wines. In order to get access to the “Tweet Spot,” you had to complete a Wine & Roses Passport at the “Selfie-Station.” Most people are aware of selfies where you take a photo of yourself and then share it with social media. If you did this and used one of the hashtags #MHWINE, #TWEETSPOT, #TXWINE, or #MESSINAHOF, all you had to do was show them your post and get a free tasting of the new wines.

At the “Tweet Spot,” you could have interviews with the winemakers. We were able to talk with Paul M. Bonarrigo and Randy Herron, assistant winemaker. Randy said he had a large part of making the Trebbiano which we really enjoyed the night before.

There were two food trucks available for food in addition to, of course, Messina Hof’s Vintage House restaurant.

There were two tents of wine available for a tasting, glass, or bottle, in addition to the wine bar and tasting room. Depending on the wine, tastings could be had for two to five tickets ($1 each) and glasses cost five to ten tickets.

The festival was a lot of fun and paired with the previous evening’s dinner (no pun intended) it was definitely worth the trip.