Gloria and I were invited to the Kiepersol Estates Distillery and Tasting Rooms Premiere so we made plans to visit other wineries in East Texas for the weekend too. We both had the Friday off and that gave us more time to plan something for our East Texas road trip. 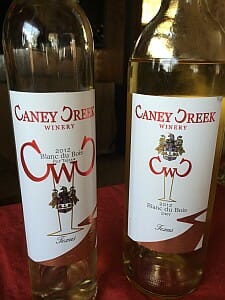 Gerald Jones from Los Pinos Ranch Vineyards has been a friend for a number of years having met and worked with him at wine festivals before and seeing him at other events. He has always wanted us to visit the winery while he was there since he is usually on the road, and he and Chef Dana suggested we stay the night in one of the cabins at the winery. We asked our East Texas wine lovers Roger and Darlene Bruckbauer to join us and plans were made to drive up on Friday and stay overnight at the winery.

Since we had the day to spend to get to Los Pinos, we decided to stop at Caney Creek Winery first. We checked to make sure the winery was going to be open (always do that first for any winery plans if you can) and was told that Bill Gayle would be there but unfortunately Rebecca Gayle would be out of town.

We arrived at Caney Creek and were greeted at the tasting room by the Gayle’s daughter, Kaycee. She soon found Bill and he joined us in the tasting room. Gloria has a few Blanc du Bois plants recently planted in our backyard and Bill previously had given some advice for planting them while we were at the TWGGA conference. He recently offered suggestions for spraying them now that they are planted and he went off to mix up a batch of chemicals while we did a tasting with Kaycee.

Gloria was unable to visit Caney Creek last time I did, so this was her first chance at tasting all their wines. Bill returned and outside the tasting room they have a few Cabernet Sauvignon vines growing. He then proceeded to give Gloria some advice on a trellis system, training, spraying, etc. It’s nice to get help from people who know what they are doing! It was time to leave so we could meet Roger and Darlene, so we said our goodbyes and we’ll see the Gayles next time. 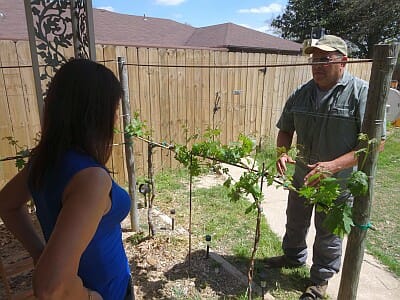 We noticed when we got to Los Pinos they had remodeled the winery a little since the last time we were there. There used to be a large open overhang next to the tasting room and now it was all one large building. Roger and Darlene and arrived before us and were already enjoying a flight of wine. We also chose a flight and enjoyed catching up with Roger and Darlene.

Chef Dana came to our table to say hello and we commented how we were looking forward to trying some of her menu items. Gerald was planning on meeting us at the winery so we decided to wait until he arrived before we ordered food. He soon arrived with his wife Lesa along with their lovely daughter and they joined us at our table. We enjoyed having the chance to meet Gerald’s family after all this time, and the entire table had a great conversation.

Appetizers were ordered along with a couple bottles of wine starting first with their new white estate wine Blanco Grande and then the ever popular Texican. Both were Texas wines and I had to ask Gerald about another wine which someone recently claimed was simply California bulk wine with a Texas label. The wine is Pinky Tuscandero and Gerald said the label clearly states American. They buy California juice just like hundreds of other Texas wineries have to, but then they make their own modifications to the recipe. In the latest wine they also use Texas grapes in it, but since it does not meet the 75% Texas grape requirement to label it as Texas, they had to label it as American. So much for that conspiracy theory. 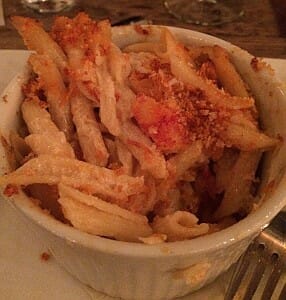 We ordered dinner and a few of us ordered the Lobster & Crab Mac ‘n Cheese. I grew up eating macaroni and cheese, but this one was lobster meat and penne pasta in a sherry cream and white cheddar cheese sauce garnished with a crab claw. I apologize for the photo of it being partially eaten, but after my first couple bites, I was in heaven and I had to take a photo. To say it was incredible is not doing it justice. Everyone else enjoyed their meals too while listening to the jazz band in the background. 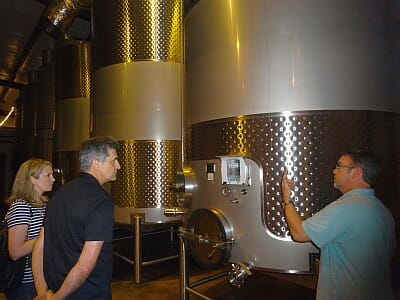 Gerald then took us on a tour of the winery’s production area. We started out in the barrel room where they have some tables which are used when they overflow from the other dining areas. It was on to the production tanks, bottling machine, and all the other equipment used. We learned that Los Pinos also helps other local wineries with their wines since they have the tank space and equipment. 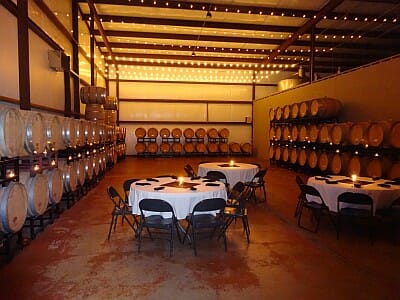 We then had a special treat of trying Cabernet Sauvignon from one barrel and then Sangiovese from another barrel. These will be the next blend for Texican so we blended our own in our glasses and indeed, the next Texican is going to be a winner too. 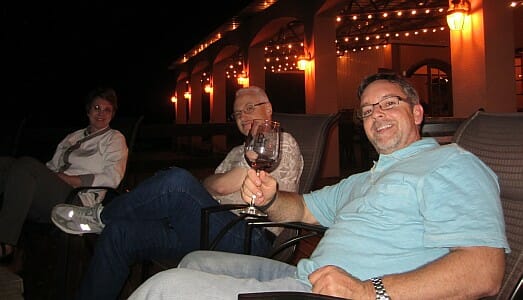 Chef Dana on left and Gerald Jones on right

It was now dark after the tour and people were gathering around the large fire pit so we joined Lesa, Chef Dana, and others. It had turned out to be beautiful weather and the night was calm and quiet. After a wonderful evening at Los Pinos Ranch Vineyards, it was then time to turn in for the night.

The next morning Roger and Darlene had to run an errand and we were going to meet up again at Tara Vineyard & Winery. It had been a few years since we were there last so we were looking forward to tasting again. We arrived and owner Patrick Pierce was pouring for the guests. 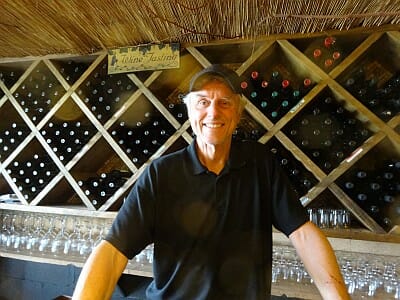 Coincidentally Russ Kane of Vintage Texas arrived for his first visit to Tara and stood next to us to start tasting, followed soon after by Roger and Darlene. We enjoyed the wines Patrick recommended while also having conversations with other people who had come to enjoy Tara Vineyard & Winery’s wines.

Russ left to head to Kiepersol Estates for the Saturday evening’s Distillery and Tasting Rooms Premiere which is where we all were heading too. Roger and Darlene are wine club members of Tara Winery so they bought some bottles with their discount (always a good reason to join a wine club!) before we had to leave.

Our next step was going to be a recently opened winery called Castle Oaks Winery which was nearby and Patrick said the owners were friends of his too. We thanked Patrick for his hospitality and left for Castle Oaks.

Taking some back roads, we soon arrived at Castle Oaks Winery and had a great visit. But that story will have to wait for another day to tell.

It was then on to Kiepersol Estates Winery for the Premiere which was the perfect ending to a great weekend in East Texas.