In part 1 about Ste. Genevieve Winery we learned about the history and took a tour of the winery. The continuation of my visit follows by visiting the vineyard and tasting room.

When the vineyard was first planted it was 1,000 acres. When owner and president Pat Prendergast came to Ste. Genevieve it was 800 to 900 acres. Over the course of several growing seasons, the vineyard was hit with freezing temperatures, hail, and strong winds which damaged a lot of acres leaving the current vineyard size of about 400 acres. Every year they plant more vines but they are not planting in addition to the current vineyard, but instead taking vines out and re-planting.

Even though the vineyard is located behind the winery, it is not really within walking distance so it required a hop into the car to drive to the vineyard. We eventually reached a gate with a ten foot fence surrounding 1,200 acres and designed to keep deer out. It must be working because along the road to the vineyard and on the way back out we passed deer.

Driving down the vineyard road we could see land on each side of the road which was getting ready to plant new vines. This year they are planting about 10 total acres of Pitite Sirah and Ruby Cabernet there. They are also planting 15 acres of Chardonnay in the back of the vineyard. As you drive down the road in the middle of the vineyard you face the mesa which is what you see on the label of their wine bottles. Years ago when they took photos of the mesa there was nothing in front of it, whereas now there are windmills and other obstacles which block the beautiful view of the mesa. 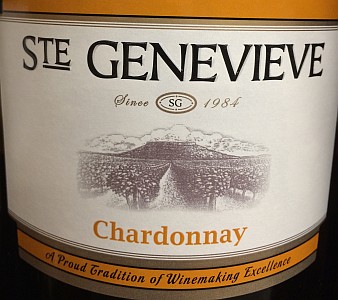 Ste. Genevieve has about 11 people that work permanently in the vineyard. Pruning started in January and it takes 12 people two and a half months to prune the vineyard working six days a week. 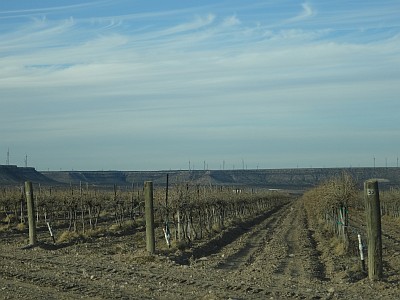 After a drive through the vineyard, it was time to visit Ste. Genevieve’s tasting room located in Fort Stockton called the Grey Mule Saloon. We took our separate cars and I followed Pat to the tasting room. The Grey Mule Saloon was built in the 1880’s to serve Texas Rangers and cowboys who were passing through the area and the U.S. Army troops stationed there. The renovated building today is a historical landmark located across the street from the Annie Riggs Hotel and Museum built in 1899. The tasting room opened in November 2012. 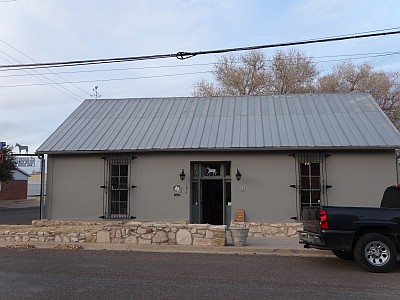 Pat introduced me to Shera Lee Davis, the tasting room manager of the Grey Mule Saloon. While Shera was getting together the wines Pat suggested to taste, he showed me around the tasting room. The first room is what they call the harvest room. It had a table in the center and on the walls are photos of the vineyard in sequence of the grape growing process. The next room is the winery room and likewise, it had photos in sequence of the wine making process. It was a great idea with some excellent photos. 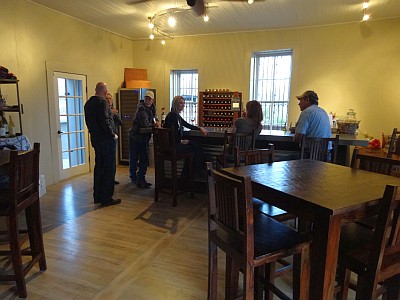 It had been a long day so far and it was time to taste some wine. They try to not serve any wines at the tasting bar which are available in retail. Looking at the tasting menu, I was really surprised. There were 13 wines and 9 of them were Texas appellation. The Texas wines were Peregrine Hill and Mesa Vineyards. 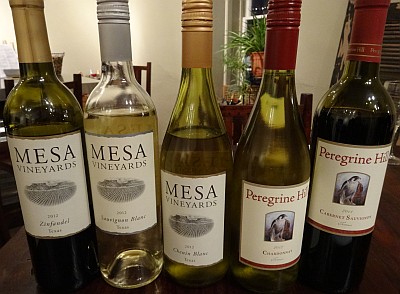 Being surprised at the number of Texas wines and the still low prices, I had to ask Pat how they can do it. He replied, “I always want to over deliver. I think one of the biggest challenges in Texas is people will ask why am I selling wine so inexpensively, and I say why are you selling wine so expensively? What will win the game in the end is quality and value for the money because we’re competing against California and everybody else. So we have to sit there and say this wine for $10 is better than all the alternatives that are available for $10. And that’s how you start to gain a reputation for the state.”

Ste. Genevieve will sell 20,000 cases of their premium Texas wines this year. Stores are always evaluating their wines against Chile, Australia, and other areas. Pat said their Zinfandel is good and he can sell it for $10, but he can’t sell it for over $22. If he tried selling Texas Chardonnay for $18 a bottle, he believes they are not going to have a lot of success and repeat business. He would rather over deliver for the price. I just wish more of their Texas wines were available elsewhere and people could appreciate Ste. Genevieve even more.

During our tasting, Pat called Ste. Genevieve’s Executive Manager Jean-Michel Duforat, and asked if he wasn’t busy to come over and visit. Soon Jean-Michel arrived and I got the chance to meet him. 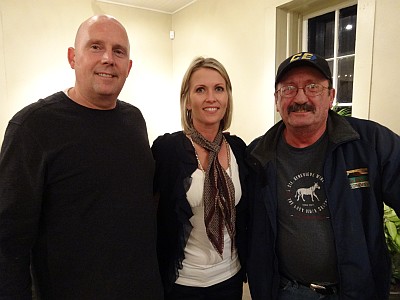 The tasting room gift shop carries on the practice of selling primarily Texas based products such as olive oil, chocolates, wine accessories, and wine baskets.

Thank you for your enlightenment! St Genevieve has always been our house wine.

You’re welcome. I was certainly enlightened!

Great article, good to read about Ste. Genevieve. Visited the vineyard ~1993 when Don Brady was the winemaker. Hope to visit again this year. Good wines for everyday.

Darn, wish we had known about the tasting room sooner. Came through Ft Stockton yesterday after a road trip to Big Bend. Very nice aritical with pic’s of old friends.

Sorry I didn’t get it posted before yesterday as I’m sure you would have a great time.

Great information about the winery and tasting room. St. Genevieve wines are a staple in our household.

Thanks. It was a great visit!

I unfortunately moved from Houston, Tx to Oxford, Al. and can’t get your wine, Why not?

Dan, sorry to hear that. You might want to try contacting them at the tasting room.

I so luv this wine ? SWEET RED IS OUR FAVORITE. ..I’M A PROUD SISTER OF MARCO DIAZ WHO WRKS HARD AND IS AN AMAZING MAN N HIS HARD WRK N WINE! SO THNK U 4 UR DELICIOUS WINES!!

Do you only bottle you St Genevieve Blush wine at certain times of the year? Not able to find it in San Antonio at this time.

You should probably call the winery or tasting room for a quicker answer. Cheers!

I love St Genevieve White Zin but can no longer find it anywhere in the Space Coast Florida area, can someone tell me what’s going on, PLEASE?

Hi Cindy, you may want to try contacting the winery directly. The best contact I found is through their website.