The 38th annual Texas Wine and Grape Growers Association (TWGGA) conference and trade show was held in Frisco from February 13-15. During the three days attendees could attend educational sessions, visit a trade exhibit hall, a special Riedel tasting, dinner and train ride on the Grapevine Vintage Railroad, and ending with the ever popular Vintner’s Gala and Auction. 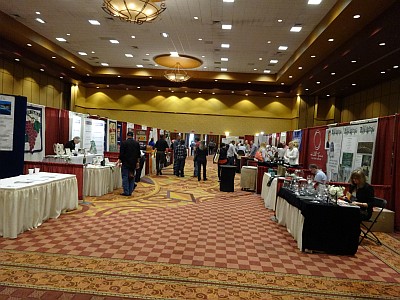 Unfortunately we were only able to attend Saturday’s events. After checking in at registration, we headed to the exhibit hall to visit the trade booths. I didn’t count the number of booths but it did seem like there were more than the 2013 conference. Visiting the booths also allowed the opportunity to network with other attendees. After a buffet lunch, attendees had a choice from four different seminars involving enology, viticulture, and legal topics. It was then time to get dressed up for the Gala. 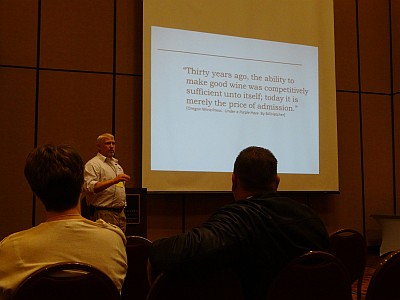 The Vintner’s Gala and Auction started with a reception where people could network and also bid on silent auction items. After people took their seats, President Jim Evans welcomed everyone to the Gala. A presentation of awards then occurred. The first award was the T.V. Munson Award which recognizes exemplary contribution to Texas grape growing. The award went to Andy Timmons from Lost Draw Vineyards. 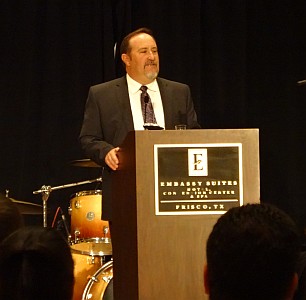 The next award was the Wine Press Award which recognizes a wine, food, travel, and agriculture writer for outstanding coverage of the Texas wine and grape industry. TWGGA’s Executive Director Debbie Reynolds described the award and then to my astonishment said the name of my website and me as the recipient of the award. I am very grateful to everybody and deeply honored to have received the award.

The last award was the President’s Award which is given by the Association President to an individual/couple who have impacted their life. Jim Evans presented the award to Robert and Jamie Wolf, original owners of Lone Oak Vineyards.

It was then time for the five course dinner with each course paired with a Texas wine. The wines during dinner came from Arché, Haak Vineyard and Winery, Lost Oak Winery, Messina Hof Winery and Resort, and Pleasant Hill Winery.

During dinner there was a pause for a live auction of various items. Paul Bonarrigo from Messina Hof was again the auctioneer and someone nearby said he has the perfect personality to run the auction. Three large bottles of wine, jewelry, grape vines, and other items were auctioned off for a good cause.

After dinner it was time for the popular Heads and Tails contest. Earlier in the evening people could buy a glow stick and during the contest, would select their head or tail (derriere) with the glow stick and the flip of a coin would determine if they remained in the contest. The winner of the contest was Debbie Reynolds and she walked away with an Apple iPad.

The Freeride Band from Abilene then started playing and dancing pursued. Those that stayed for dancing had an enjoyable time dancing or just listening to the songs from the band. The silent auction winners were determined and people began collecting their winnings. Gloria and I were outbid on a number of items but we did end up winning a season pass for the Texas Hill Country Wineries remaining wine trails. I guess that means we’ll be hitting the winery trail again soon!

The 2014 TWGGA conference once again was a success and everyone I saw had a great time. See everybody next year in San Marcos!

Jeff,
Congrats!! Wine Press award !! You deserved it, we all appreciate the newsletters and blogs you write, they bring out the best for Texas Wine Growers .

Congratulations on being recognized for your continued efforts in support of the Texas wine industry!! I am pleased and proud to know you and call you my friend! I can’t think of anyone who deserved this award more than you. I’m sorry I forgot to get your autograph…can’t wait to hit the road w you and Gloria again in May. I’ll get it then!! Happy writing…

Thanks Laurie. I’ll be sure to give you that autograph in May. 🙂