Val Verde Winery is located in Del Rio and is known as the oldest continuously running winery in Texas. The winery was established by Italian immigrant Frank Qualia in 1883. When he arrived in Del Rio, he found Lenoir grapes growing and founded the winery. After his death in 1936, his youngest son, Louis Qualia took over the vineyards. He introduced the French Herbomont grape to Texas. He in turn passed the winery in 1973 to his youngest son Thomas Qualia. Also working at the winery is fourth generation Michael Qualia.

Del Rio is just a few miles from the border of Mexico in Southwest Texas and Val Verde Winery is located in one of Del Rio’s historical residential areas. I found the winery with ease among the neighboring houses and the winery had just opened for the day. 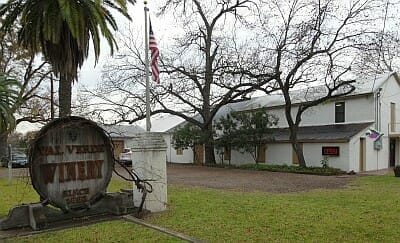 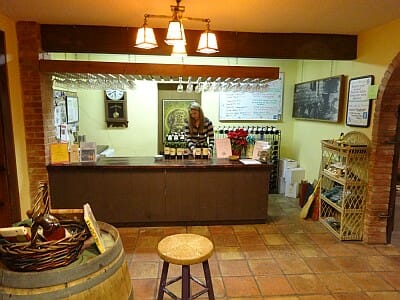 The winery’s vineyard which is located behind the winery contains 12 acres of Lenoir grapes. Most of the grapes used by the winery come from the High Plains. The Merlot was the only wine made with non-Texas grapes. The winery produces 2,500-3,000 cases of wine a year. Val Verde Winery also grows olive trees and produces their own olive oil. Roaming among the vineyard are chickens which provide eggs that the winery sells.

After a tasting you are welcome to take a complimentary tour of the winery and learn about their treasured history. The winery was the 17th bonded winery in Texas and was awarded the Land Heritage Award from the Department of Agriculture for single-family ownership of the vineyards for over 100 years. On December 14, 2013, Val Verde Winery celebrated its 130th anniversary. The building itself is the original one where the winery started so it is also 130 years old. The winery uses both American and French oak barrels. 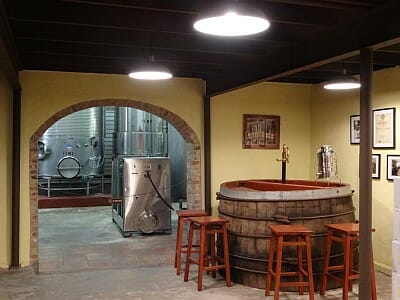 Val Verde Winery has a wine club called the 1883 wine club. There is a gift shop with wine accessories, glassware, wine mixes, and of course the Val Verde Winery olive oil. You can even buy an olive tree to grow your own olives at home. Wine baskets can be custom made for gifts. The winery can be rented for events such as weddings and business meetings.

If you do not live in the area, be prepared for a long drive to Del Rio, but afterward you can be proud to say you visited the oldest winery in Texas.