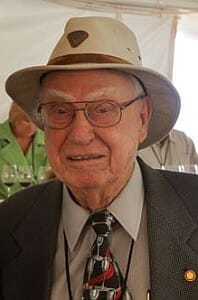 The sad news today is Dr. Clinton A. “Doc” McPherson passed away in the early morning on January 25, 2013. He had not been in good health recently. The funeral is in Lubbock Monday morning.

Doc McPherson and Robert R. Reed started growing grapes around a patio in Lubbock County in the early 1960’s. McPherson was a chemistry professor at Texas Tech and Reed was a horticulture professor. After they were successful getting 200 pounds of grape from the vines, McPherson being a chemist said they should try making wine from them.

The two set up an experimental winery in the basement of the Chemistry Building at Texas Tech. After some preliminary success, they were able to set up a limited partnership and started Llano Estacado Winery in 1976. Time has passed and today Llano Estacado is the second largest winery in Texas.

In the meantime Doc McPherson was the first in Texas to plant Sangiovese in his famous Sagmor Vineyard. McPherson Cellars uses grapes from the Sagmor Vineyard along with some other fortunate wineries.

Since Robert Reed passed away last year, we have now lost two of  the real pioneers of the Texas wine industry. Texas wine will miss Doc McPherson, but his legend will live on.