Red Tail Ridge Winery is located on the western shore of Seneca Lake in the Finger Lakes. The winery is owned by the husband and wife team of Mike Schnelle and Nancy Irelan. Mike is the viticulturist while Nancy is the winemaker. The winery is named after the two nesting pair of hawks who live in the woods near the vineyard. 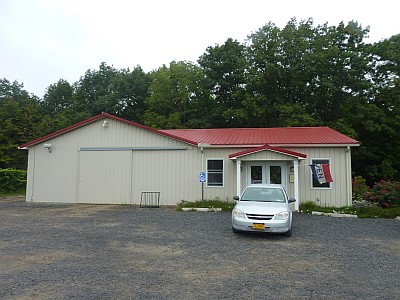 We entered the rectangular tasting room and there were already a number of people enjoying themselves at the tasting bar. We found a spot to stand at the tasting bar and learned how we could do a tasting. There is a tasting fee for your selection of five wines. The tastings are poured form the uncorked bottles and wine crackers are available to cleanse your palate. 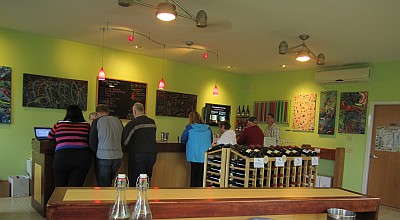 We met Danielle who is the tasting room manager and marketing manager for Red Tail Ridge Winery. At the time the winery has all estate wines except two wines. The wines being tasted were:

10% of the sales per bottle of the Good Karma go to Foodlink, the regional food bank. There were also some additional wines which required an extra tasting fee such as a 2009 Sparkling Rosé and NV Port. The winery produces 6,000 cases of wine a year. 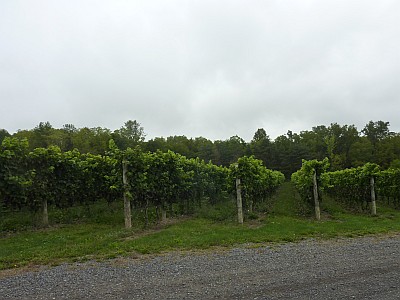 The 20 acre vineyard was first planted in 2005 and today they are growing Riesling, Chardonnay, and Pinot Noir. Blaufränkisch was planted after pulling up some Riesling. According to the staff, Wine Spectator said they committed heresy. 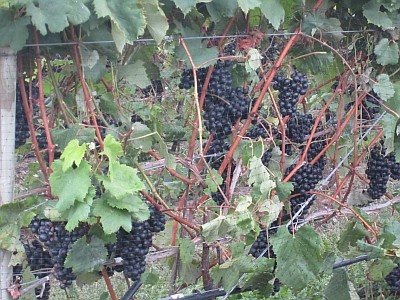 The tasting room opened in 2007. In 2009, the Red Tail Ridge Winery was the first LEED (Leadership in Energy and Environmental Design) gold-certified winery in the state. 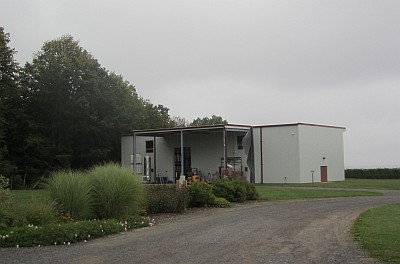 There is a wine club called the Nest Club. Every few months Red Tail Ridge Winery features a new artist in their tasting room presenting their artwork.