Inniskillin has two locations in Canada, one in Niagara-on-the-Lake, Ontario and the other in Okanagan Valley, British Columbia. The winery was started in 1975 by Donald Ziraldo and Karl Kaiser. Inniskillin is often mentioned as Canada’s first maker of Icewine which they produced in 1984.

We visited Niagara Falls and were deciding what to do during the day after we visited the Falls. Our hotel had a wine store featuring Inniskillin Icewine and since we love Icewine, the decision for the day was fairly easy. We then made our way to the closest location in Niagara-on-the-Lake. 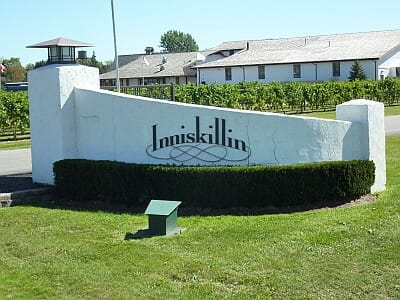 We arrived at the winery passing the vineyards and headed to the tasting room. On the way was a vineyard stating they were Icewine grapes. We gladly discovered there were tours available and quickly signed up to take one. 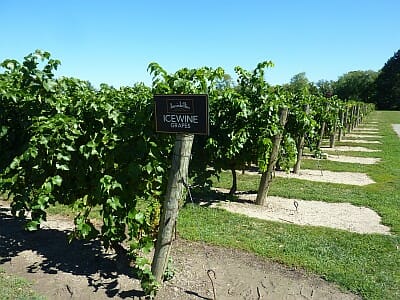 We learned a lot of things during the tour since the winery has such a history with Icewine. Donald Ziraldo handles the marketing and since Karl Kaiser retired in 2006, Bruce Nicholson started in 2007 as the winemaker. 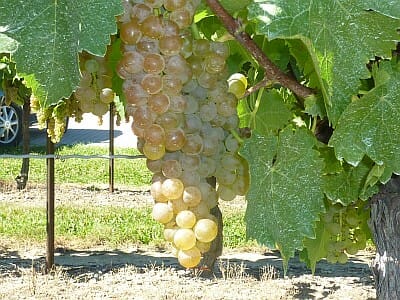 The winery has 25 estate acres of vineyards but also buys from other local growers. The VQA (Vintners Quality Alliance) is the regulatory system for Canadian wineries. For a VQA wine, 85% of the grapes must be from the region. At the time of our visit, harvest had begun a week prior and they were currently pressing Pinot Gris and harvesting Pinot Noir.

Of course Inniskillin is noted for their Icewine and we learned the vineyard close to the tasting room were Vidal grapes. The winery makes Icewine from Vidal, Riesling, and Cabernet Franc grapes including two sparkling Icewines. The grapes are left on the vine until the temperature reaches 16 degrees and then the grapes are harvested. A basket press is then used to press the Icewine grapes. A basket press is used because a bladder press would take a long time due to the frozen grapes. 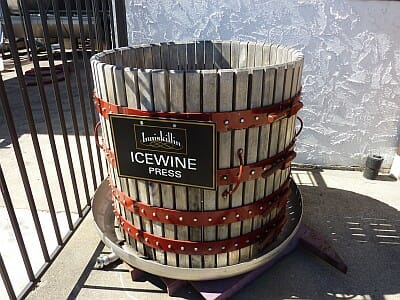 In 1989, Inniskillin’s Vidal Icewine won the Grand Prix d’Honneur in a Bordeaux, France wine competition and this put Inniskillin on the map. We were told that 80% of Icewine in the world is made in the Canadian region. Also interesting is that Donald Ziraldo convinced George Reidel of Reidel wine glasses to make an Icewine glass. 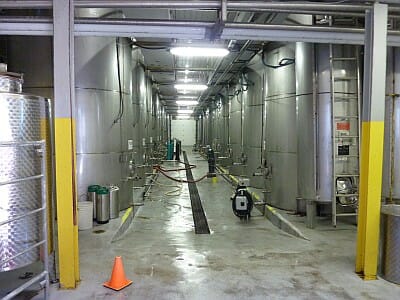 After the tour, we tasted some of Inniskillin’s wines which were included with the tour. The tasting room also has their premium table wines available for a fee per sample. There is a special Icewine tasting bar available where you can compare the different flavors of Icewine.