Heron Hill Winery is located in Hammondsport on the west side of Keuka Lake in the Finger Lakes. The winery is owned by John and Jo Ingle and opened in 1977. The winemaker is Bernard Cannac.

Due to the numerous wineries located in the Finger Lakes and since we were going to be on a tight schedule, we had not initially planned on visiting Heron Hill Winery. That changed immediately while we drove down the road and saw the magnificent building high up on the hill and we had to stop. 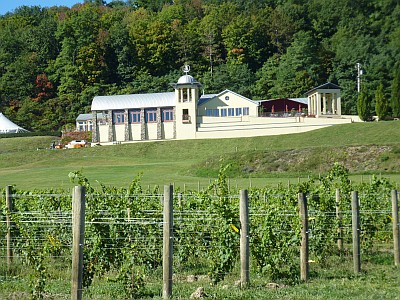 The view from the winery overlooking the vineyard and lake is just as beautiful as looking up at the winery. Entering the winery, the large gift shop is to the right and the tasting room is to the left. 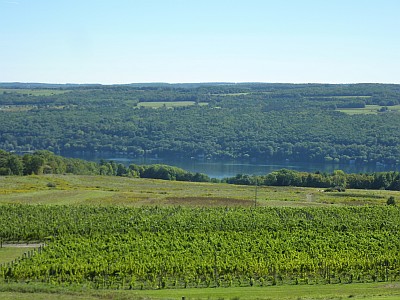 Tastings are done while standing at the tasting bar and there is a tasting fee for six wines. The tastings are poured from the uncorked bottles. Crackers are available on the bar to cleanse your palate. 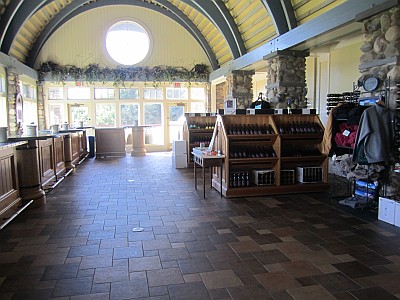 Some of the wines which were available were:

Heron Hill Winery is most noted for their Rieslings and the winery produces 15,000 cases of wine a year. We also learned from our tasting guide that Keuka Lake is the only Y-shaped lake in the world.

Heron Hill Winery gets most of its grapes from the 12 acre vineyard at the winery and from John Ingle’s vineyard where there are another 20 acres located on the west side of Canandaigua Lake. Varieties grown include Riesling, Chardonnay, Cabernet Franc, and Pinot Noir. We were told as we had already learned that the limestone minerality is perfect for Rieslings and the growing climate is the closest to Germany.

Weddings are very popular at Heron Hill Winery and that is understandable due to the beautiful views and wines. In fact people from out of New York State often come to the winery for their wedding. The July, 2009 issue of Travel + Leisure named Heron Hill Winery as one of the 10 most spectacular tasting rooms in the world. 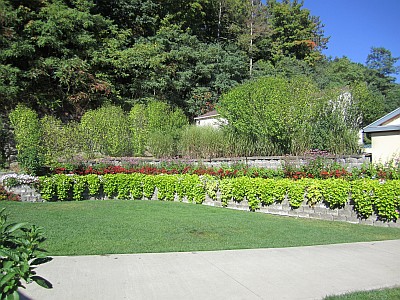 As mentioned, the gift shop is very large and offers items such as candles, wine accessories, clothing, pottery, foods, candy, and sauces and oils. Heron Hill Winery has a wine club with different levels of membership. The Blue Heron Café is also at the winery where a nice selection of foods can be enjoyed.

There are two other tasting rooms for Heron Hill Winery located in Himrod on Seneca Lake and Canandaigua at Bristol.