We have gone to Bending Branch Winery when we visit Fredericksburg and can escape south to Comfort and have enjoyed every visit. In the past year, we have met at various times both Jennifer Beckmann, Director of Marketing of Bending Branch, and John Rivenburgh, co-founder & VP of Winery and Vineyard Operations. At TEXSOM this year I got the chance to finally meet co-owner and winemaker Robert (Bob) Young.

During my trip to Grape Camp this year, Jennifer Beckmann invited me to stop by the winery to take a tour of Bending Branch Winery. I couldn’t pass up that offer so I made the trip south and met Jennifer in the tasting room. 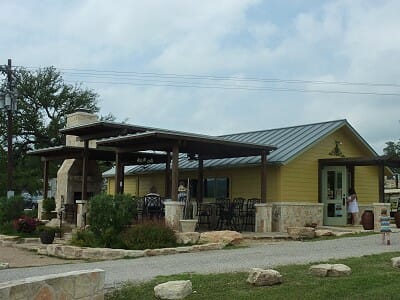 After tasting some wines with Jennifer, she unfortunately had to leave for an event but turned me over to the talented John Rivenburgh. John and I hopped into a nearby golf cart and he started explaining about the winery and grounds. Before going very far, John described the front house where he lives was originally a ranch which in 1840 was deeded to the Jones family. The house was actually a cabin and an addition was added in 1870 followed by another addition in 1930. In 2011 the Rivenburghs added another addition to the house and remodeled the house some more.

Driving up the winery road, we went past the house of Bob Young located behind the tasting room. The house was started in April, 2011 and the large stones which are at the entrance came from the property.

We then drove by the front vineyard where they have planted one acre of Charbono, one acre of Alicante Bouschet, and one acre of Sagrantino. John explained they will be building a bigger 18,000 square foot winery which is currently being designed to give them more space since they do all their winemaking and fermentation in half ton bins. They only do tank fermentation for their white wines.

Bending  Branch Winery is in the planning stages of building a new tasting room further down the property from the current tasting room which will take advantage of the views, back up to a vineyard, and be a little easier to get to. There will also be a reserve cellar underneath. John is designing the tasting room and said the architectural style could probably be called “Hill Country Modern.” A small amphitheater will be built too which will seat about 60 people. 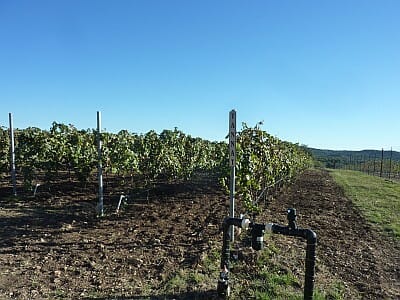 Heading back up the road some more we rode past head trained Mourvèdre and their famed Tannat vines. Did you hear that Bending Branch Winery won the Top Texas Wine at the 2014 Houston Livestock Show and Rodeo International Wine Competition for their 2011 Estate Grown Tannat?

While John was talking about the vineyard, he said he has been working on a style of head training which is like a vertical cordon. This is going to give him the ability to move the spurs around so he’ll have renewal spurs available in addition to utilizing the method of cane pruning.

The golf cart arrived at the winery where John first showed me two overhead doors with different colors. He explained the darker colored door was insulated and inside was the fruit room where at harvest time they can bring fruit in and cool the room down to 35-40 degrees to keep the fruit chilled. He has also brought the press into the room and pressed the whites at 35 degrees which of course requires the workers to dress appropriately when it could be over 100 degrees outside. 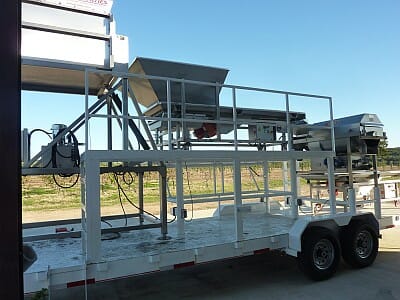 Bending Branch has a mobile crush pad which they take right to the vineyard and can do 6-8 tons an hour. While John is at the vineyard, Bob Young is at the winery ready with guys to unload the bins. After unloading the bins, Bob then inoculates everything, starts fermentation, and the guys drive back to west Texas (High Plains) for the next round of fruit. They do the same process in California but the vineyards there are closer to where the processing is done. 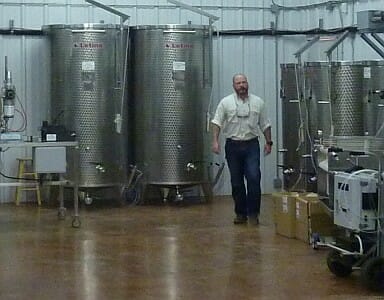 As mentioned previously because of the way they make their wines, they do not have a lot of tanks. They use American barrels and one of the manufacturers they like is Seguin Moreau from California. John pointed out the label on the barrel which said “Chêne d’Amérique” which in English means American oak. All the barrels are fluted on the inside which means they are grooved and gives 60% more surface contact with the wine. This allows them to use less new oak barrels. 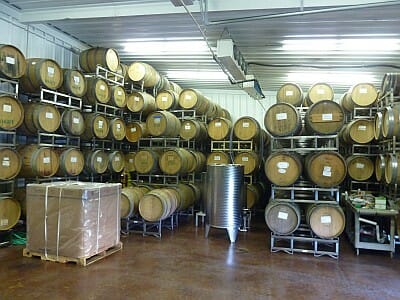 John was pretty proud of the way the air conditioning works in the winery. There are 6,000 square feet of building over four structures. The way the buildings were built, they have never had a utility bill over $600 and they keep the buildings anywhere from 58-60 degrees.

I had brought my tasting room wine glass with me and felt honored when I had the opportunity to be the first person to taste from the barrel, other than John and Bob, a 2012 Malbec from Newsom Vineyards. Wow, that is going to be one awesome wine when it comes out in a year or so! I was ready to bottle it up right there but of course John said it had to wait more so it would be perfect. 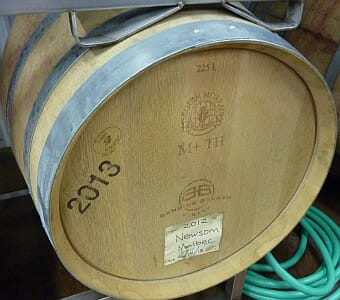 We then tasted a 2012 saignée Tannat which was made using 100% estate organic grapes. Saignée is a winemaking method where you bleed off a certain percentage of juice so you have a more condensed fermentation leading to more berry to juice concentration. This gives the wine more tannin and color.

The tour was over and we rode back down the hill to the tasting room. I thanked John for the excellent tour and want to thank Jennifer and Bob for allowing me to come by for a great visit!