Fall Creek Vineyards is located in Tow (rhymes with cow) and is owned by Ed and Susan Auler. Their vineyard was first planted in 1975 and the current winery location opened in 1983.

We have been to Fall Creek Vineyards a few times but that was before this blog started so a return visit was in order. I met Susan Auler at TEXSOM and she told me to let her know when I was visiting the winery again. I did so and was told she and Ed would meet me at the winery. 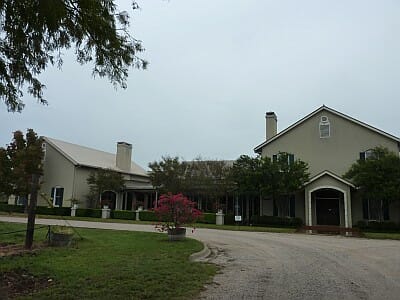 I arrived at the winery when it opened and Ed Auler greeted me at the door followed soon by Susan Auler. The last time we were at the winery we had taken a tour but somehow we lost all photos, so they were more than happy to give me another tour. I learned so much during the tour that it would take multiple posts to describe everything, but it was such a pleasant, informative, and interesting conversation with the Aulers. 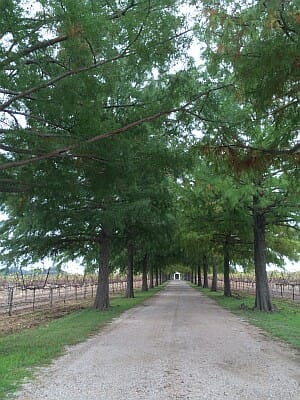 They first gave me a history of the winery. In 1973 they took a 21 day driving tour of France visiting vineyards. They fell in love with the wine and food and after realizing it looked a lot like home and the terroir was a lot like Texas, they started asking questions. When they got back home they checked around to see if anybody else had done a vineyard and winery, and Llano Estacado Winery had the same idea and were talking about putting in an experimental vineyard.

The Aulers planted their vineyard in 1975 on land that had been in Ed’s family for three generations and planted mostly French/American hybrids. They received guidance from influential winemaker André Tchelistcheff who served as a wine consultant in the 1970’s. By 1979 they opened up a small winery which was a renovated garage at their ranch house and stayed there for three years. They started a new facility (the current one) in 1982 and finished in 1983 to open up the doors.

Back in those early days there was no real Texas wine industry, so they had to write a lot of the early legislative laws with Llano Estacado and La Buena Vida Vineyards. It was very difficult but today it allows wineries to easily make progress through the legal system. Ed and Susan Auler also created the Texas Hill Country AVA in 1986 and it was approved in 1990.

Ed then described the vineyards Fall Creek use. From Salt Lick Vineyard in Driftwood with Scott Roberts, they get Tempranillo, Grenache, Syrah, Mourvèdre, and Sangiovese. From Certenberg Vineyards in Voca with Alphonse Dotson and Martha Cervantes, they get Cabernet Sauvignon, Merlot, Chardonnay, and Muscat. From Mesa Vineyards in Pecos County, they get Sauvignon Blanc and Chenin Blanc. Fall Creek Vineyards themselves grows 65 acres of Lenoir. They also have an experimental vineyard with Texas A&M AgriLife Extension Service trying various varieties. Fall Creek plans on planting some additional vines next year of some variety.

When I asked how much of their wine is made with Texas grapes, Ed had to think about it and said probably 30-40%. He said the number was going up next year and if they had their choice, it would be 100% Texas. The problem is with the amount of grapes needed, they have had to go out of state for fruit. One important reason too is because they need to maintain their shelf space in the stores.

A lot of their wines say American on them but they can still contain Texas grapes and even 100% Texas grapes at times. As is commonly stated by wineries, the problem of label approval time adds to the issue. Susan said it takes 88 days now for label approval. She said, “You have to be able to move quickly. If a restaurant wants a private label and they want it be on this date, you can’t do it. If you can’t do it, they get a California winery to do it.”

Even the TABC (Texas Alcoholic Beverage Commission) is taking longer. Ed said, “I could walk into the TABC years ago with a label that was approved and that was it. Now we’re up to three weeks on TABC. Add that on top of the 80 some odd days. So if you make a minor change on a label, you have a four month delay.” 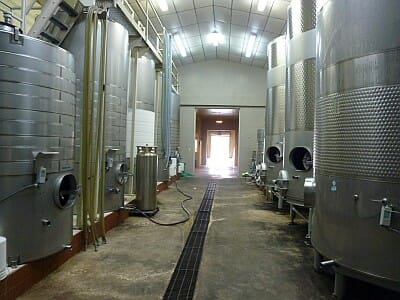 Fall Creek Vineyards produced 250 cases of wine their very first year and are now producing 50,000 cases a year with the capacity and wanting to do more. At the time of my visit, they were bottling Sauvignon Blanc. Besides the Fall Creek labels, they also have a Twin Springs and Ed’s label where both of the latter are from California grapes.

Ed Auler and longtime employee Tom Barkley, general manager and assistant winemaker, have been doing the winemaking throughout the years. The Aulers asked themselves if they wanted the current state of the winery to be as it is and they decided no, they wanted to bring their winery to a higher level. To do so, they wanted to find somebody with vineyard and winery knowledge including a global experience to be the winemaker. With those requirements, it took a year and a half of looking but after advice from winemaker Paul Hobbs, they found 43 year old Sergio Cuadra (link). They used Skype for about a month (their first time using Skype) to talk with Sergio who was in Chile.

With Sergio’s extensive background around the world, they had to ask him the obvious question which was why he would want to come to Texas. Sergio replied there were three reasons:

After conversations with Sergio, including him visiting the winery, they knew they found the right person. Not to put Sergio under pressure, but he arrived August 3rd and Fall Creek Vineyards started harvesting the next day. Ed said even at this early stage, Sergio has brought some things to them which has made an extraordinary impact.

Unfortunately at the time of my visit, Sergio Cuadra was in Chile to pack up his family and get matters in order to return to Texas for good on November 20th. I could tell the Aulers were very excited about Sergio arriving to both bring new ideas and enhance the Fall Creek portfolio of wines. 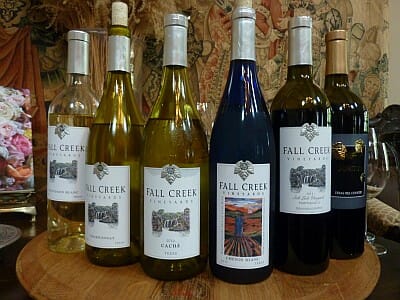 It was time for a tasting of Fall Creek Vineyards wines and we first tasted their “signature” white wine which was the Sauvignon Blanc. The grapes came from the Mesa Vineyard. Of course I have had their Sauvignon Blanc in the past and the wine tasted very good. This was a great start to a wine tasting.

At this time during the conversation, I learned that Ron Yates, owner of Spicewood Vineyards, is the cousin of Ed Auler. As they say, you learn something new every day.

Next to taste was their Texas Chardonnay. This was made with grapes from both Mesa Vineyards and Certenberg Vineyards. The Chardonnay was not oak bombed like other Chardonnays and my first thought was, “Who said Chardonnay can’t be made in Texas?” Unfortunately as I learned later, there was not enough supply to buy a bottle.

We then walked to the barrel room to taste the next vintage of the Texas Chardonnay from a French barrel. Wow, that’s going to be a great Chardonnay! The wine is being fermented in barrels, but not for long. I was told when the French do a tasting from a barrel, they pour whatever is left from their tasting back into the barrel and the Aulers do the same for this wine. I did not want to be greedy and drink my entire tasting so I left a little Texas Wine Lover in the barrel.

We then tasted the 2010 Caché which is a white wine they do not produce all the time. Their idea is to get loads of fruit on the front but end with a dry finish. They made one in 2006 and then this one in 2010. It depends on the harvest when they will make another one. The 2010 vintage is 90% Chardonnay, 9% Muscat Canelli, and 1% Sauvignon Blanc.

It was time for the Fall Creek 2012 Chenin Blanc which used a special label for this year. They commissioned to have a poster made and this is on the label. The poster has Fall Creek falls superimposed over the vineyard and is captioned by “Where the sky fell in love with the Earth and gave birth to wine – Fall Creek Vineyards.” They have been producing Chenin Blanc for 30 years.

Next was a 2011 Tempranillo from Salt Lick Vineyards grapes. Ed believes they were the first people in Texas to plant Tempranillo and even Viognier, but their vines died in 1990 with a freeze. At that time they were third leaf but they never got to harvest a grape so they started looking to other growers for their grapes. They had their first Tempranillo harvest from Salt Lick in 2008 and have been improving it every year.

During the tasting, I learned Ed is very particular in the glassware to ensure a new glass was used for each wine. As Susan said, “He likes to do the blending in the lab in the back of the winery, but not in the glass.” Makes sense to me.

The last wine tasted was the 2010 Meritus. This version of the Meritus was made from 97% Cabernet Sauvignon and 3% Merlot because that’s what Mother Nature gave them. The wine received a Double Gold medal at the 2013 Tasters Guild International Wine Competition. The wine begs for a steak but lamb and pork would work well too. There will not be a 2011 version of the wine because the grapes were not there.

During a delicious lunch which we tested various food pairings, I had to ask the question about the origin of Ed’s Smooth Red which has been very popular for Fall Creek Vineyards. Ed explained the history and Susan said she was surprised he said so much about it, so I cannot repeat it here. Needless to say, it made perfect sense to create Ed’s Smooth Red and now Ed’s Smooth White.

Lunch was finished with the fabulous Dotson-Cervantes Gotas de Oro wine which is a Muscat Canelli. 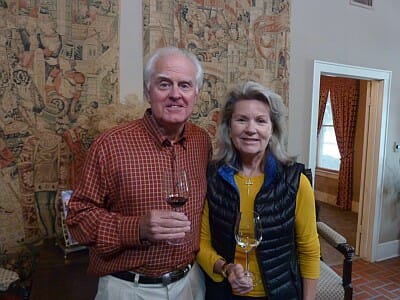 I now had to get my normal information on a winery visit, so we headed to the tasting room. We went past the nice covered patio where you can enjoy a glass of wine.

When we first visited Fall Creek Vineyards, it was the first winery we visited where we were surprised you could buy a Texas wine for less than $10. It is still true today because their Chenin Blanc is still under $9.

There is a tasting fee for six wines and you get to keep the glass. For a higher tasting fee, you get to keep a Riedel wine glass. The wines are poured from the bottle while you do a tasting standing at the tasting bar. Oyster crackers are available to cleanse your palate. 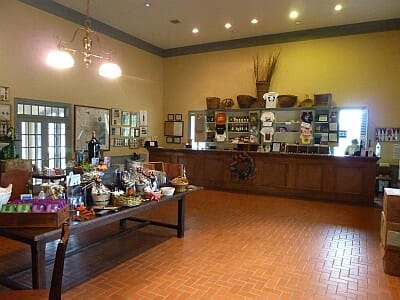 A large gift shop is available with wine accessories, gift baskets, clothing, and more. Tours of the winery are available as we learned in the past. Events are often held at the winery like weddings, wine dinners, and a grape stomp. Coming up is a Christmas! Artisan Fair and Post-Thanksgiving Lunchtime Feast in December.

I said my goodbyes to Ed and Susan Auler and thanked them for their hospitality and wonderful company.