Eaglefire Winery announced they would be bottling four wines early on a Saturday morning: Muscat Blanc, Blanc du Bois, Meritage, and Reserve Meritage. Since we had helped owner/winemaker Chris Caldwell bottle before, I decided to volunteer again. 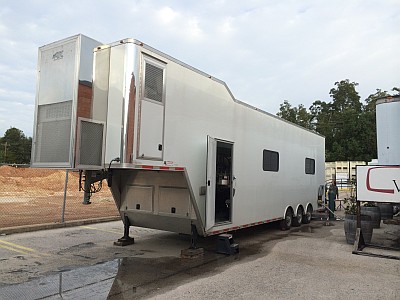 In the past when we bottled, there were multiple people needed for each stage of the process from filling the bottles, inserting the corks, foil capsules, and then inserting the bottles into the boxes. It took time but we had fun doing it. I wasn’t sure about this time because it appeared Chris was going to use a mobile bottler. Sure enough when I arrived, Bacchanalia Bottling’s truck and trailer was backed up to the winery and getting ready to start the line running. I met Skip Hutnek of Bacchanalia Bottling and his other employees. This was the first time Chris was not going to hand bottle. 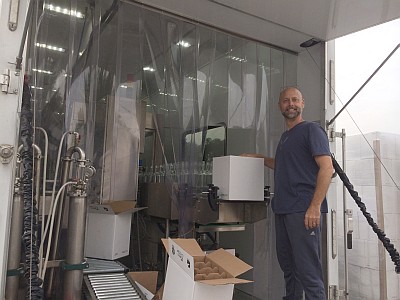 Before we got going, Page Brockman of Braman Winery came by (remember they merged with Eaglefire Winery?) to see how things were going. Chris talked a little bit about the winery they will be building next year next to the current Braman location in Richmond and it sounds like it will be great. 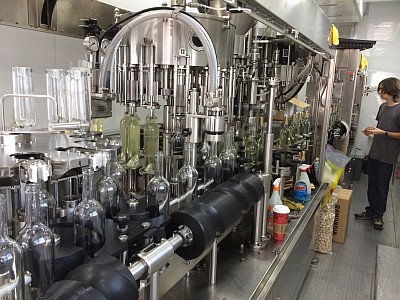 I have seen quite a few bottling lines in our winery visits but have not had the opportunity to see a mobile bottling line in person so this was going to be interesting. Everything was in the trailer just as if it was sitting on a winery’s production floor. Chris took the task of loading the bottles onto the line, Skip and employees handled the running of the line, and I got the job of getting the bottles coming off the conveyer and inserting into the box. I then passed the box down the rollers to another person who would stack the boxes on a pallet. 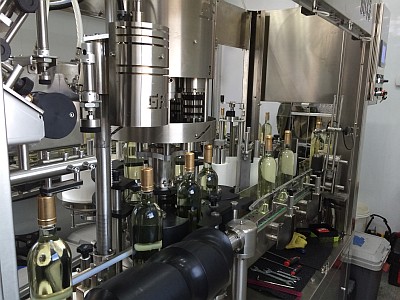 Things moved slowly at first because the line needed adjusting in spots but soon they got it cranked up and the bottles were coming at a pretty brisk pace. I was also told I was the last line of defense so I was playing quality control too. The job of stacking the boxes on the pallet probably needed two people because eventually the boxes would get high taking longer to stack so there was nobody for me to roll the box down to. That would eventually hold my end up. Then I was told later to roll the boxes and they would stop by themselves.

The bottles sometimes would come fast and I was getting a technique down to quickly get them in the boxes, roll them down, grab an empty box, and start again. As I write this now my wrists and arms are hurting! It is a lot faster bottling this way but more stressful and strenuous than the old way. 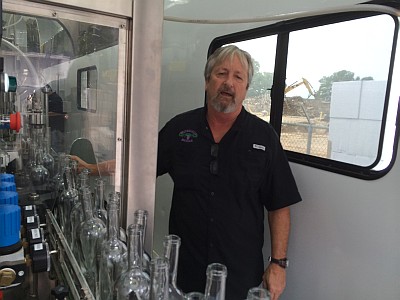 When we took a little break between wines being bottled, I had the chance to talk to Skip Hutnek. He said we were doing about 1,900 bottles an hours worth and the bottling line when labeling too can handle 2,500-2,600 an hour. Right now there are only two mobile bottling lines in the state of Texas and he works with 38 wineries. Surprisingly there are not that many in the country.

I helped bottle three of the four wines and would have finished the day out but I had previous plans which required me to leave.