I attended the first day of the Texas Wine & Grape Growers Association (TWGGA) 2013 Grape Camp. Grape Camp is a two day event with educational sessions for grape growers. Also available are vendor exhibits with the focus on grape growing. This year the first day was geared toward the new grape grower or people wanting to start growing grapes. The second day included educational sessions leaning toward topics for experienced growers.

One of the nice things about Grape Camp is being able to catch up again with old friends. Since day one was for new growers, it was nice to see very experienced growers present still taking in the educational seminars and enjoying the networking too. As one grower who sat next to me said, he may already know the topics presented to the new growers, but it is a nice refresher. 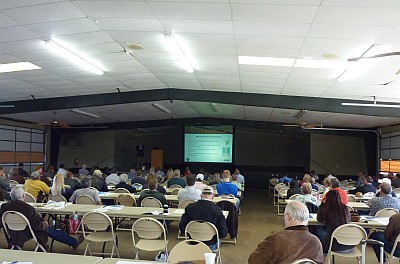 The first seminar was “Overall Planning for Developing a New Vineyard” by Dr. Ed Hellman, Texas A&M AgriLife Extension. Highlighted topics presented were site selection including the critical things to look for when trying to find a location for a vineyard. One of the most important items is the soil and there is a great website available to get a soil map for any property you’re considering in which to plant a vineyard. http://websoilsurvey.nrcs.usda.gov

Another topic was “Irrigation in Vineyards” by Kris Nightengale of Jain Irrigation, Inc. We learned Texas is the third most irrigated state in the continental United States. Kris presented alternative irrigation methods like using white drip lines instead of black, submerged dual drip lines, frost protection, and vine cooling. Vine cooling can hold grapes up to three more weeks on the vine before harvesting. I heard later many of the experienced growers discussing some of these new techniques.

Jim Kamas of Texas A&M AgriLife Extension, presented “Overview of Pierce’s Disease and Cotton Root Rot.” The insecticide imidacloprid is the best option for vineyards to prevent Pierce’s disease as it keeps glassy winged sharpshooters from staying on the leaves. Admire Pro is a popular name brand and there are now generic products available which are a little cheaper. The cheapest product to use costs about $34 an acre which admittedly is not that expensive to prevent the disease.

“Varieties, Clones, and Rootstocks” was presented by Andrew Labay, Texas A&M AgriLife Extension. Of course if you want a vineyard, you need to decide what to plant. The varieties to choose depend on a number of factors which need to be considered. Risks to consider are spring frost, fruit rot, and disease susceptibility. It was suggested to create relationships with wineries before you plant. Also talk with other nearby growers to see what they are growing which has been successful. Mr. Labay showed slides of the top red and white varieties being grown in 40 vineyards in the Hill Country. The top three red varieties are Cabernet Sauvignon, Merlot, and Tempranillo. The top white varieties are Chardonnay, Viognier, and Riesling.

Now it was time to scare the new growers and I learned later in the evening that some growers were kind of hesitant now, but they understood they need to fully understand all the risks in growing a vineyard. The presentation was “Monitoring and Managing Pests, Diseases, and Nutrients in the Vineyard” by Fritz Westover of Westover Vineyard Advising. Possible pests which can affect the vineyard are the grape berry moth, grape cane borer, green June beetle, leafhoppers, and other minor pests. Diseases such as anthracnose, black rot, trunk diseases, downy mildew, phomopsis, and powdery mildew can also affect the vineyard. 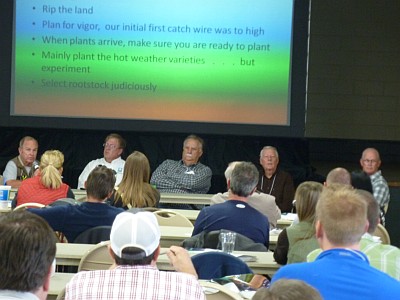 The seminars were running a little late but it was time for the Grower Panel Discussion which some people probably wish could have run a little longer. Five experienced growers gave their tips on growing a vineyard. 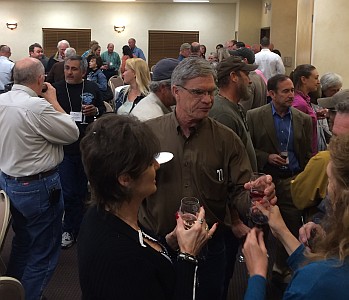 The educational part of the day was done and it was now time for socializing and having dinner. Most people attended the wine and cheese reception followed by a BBQ dinner at the Inn on Baron’s Creek. Most of the wine available was brought by those attending and it was a great chance to sample wine from wineries you haven’t had an opportunity to try. Of course the socializing aspect of the evening was great and it is always nice to put a face with names you may already know. 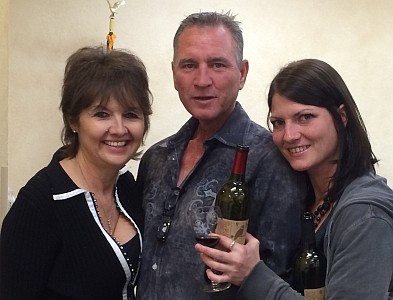 Put it in your calendar to attend next year’s Grape Camp, which if following precedence will be November, 2014, in Fredericksburg.

Jeff,
Love this picture of me and the Blue Ostrich Gang:)

I agree Rachel. Much better without me in it. 🙂

We are beginning growers of a vineyard and winery in Eustace, Texas. Knowledge is absolute power over failure in the wine growing business. As two married elder seniors who recently retired from a State Farm Insurance Agency of 28 years, our dream of a soon to be winery is slowly coming to fruitation with the purchase of a beautiful 30 farm with an equally beautiful home in East Texas, just outside of the charming city of Eustace, Texas, nine miles from the main portion of Cedar Creek Lake. There could not be a better place to be with in wonderful… Read more »