A very common way to visit wineries today is with a tour company and limo/van. The advantage to this besides letting an experienced person/group know where to take you is to have a designated driver. We were invited by friends to stay the weekend at the beautiful Island on Lake Travis in Lago Vista. There were going to be a total of four couples and we were going to rent a van for Saturday to take us to wineries. This is the first time Gloria and I had not driven to wineries and the first time I had not planned on which wineries we were going to visit. The van was not a winery tour company so we let someone else in our group decide where we would visit. We were along for the ride as were two other couples who had never visited Texas wineries before.

We piled into the van and it was decided the first winery we would visit was the closest one to the resort, Flat Creek Estate. We arrived just in time for the Saturday production tour and tasting. It was suggested with a group of eight that it would be the most economical and interesting way to do a tasting. We went to an adjacent room with four other people and co-owner Madelyn Naber introduced herself and started us on a tasting. We were given a sheet of wines to select from and there would be a total of seven groups of tastings with two wines each. The best way if you were with someone else was to select both wines from the group and share the tasting so all wines could be tasted. That is what all of our group elected to do. 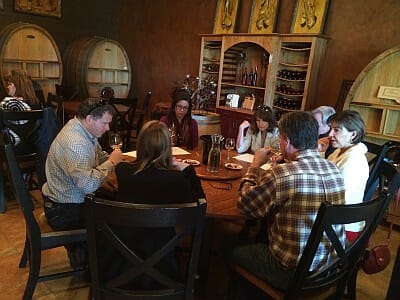 Gloria and I had met Madelyn Naber before but did not have long to speak to her at that time so it was entertaining to listen to her explain about the winery and introduce the wines. She said the winery had 20 acres of vineyards and right now produces 8,500 cases of wine a year. They have been fortunate through the years to have different winemakers who always added benefit to the winery and with the current winemaker, Tim Drake, their portfolio has gotten bigger and better. During the tasting, Madelyn’s husband, Rick Naber, came in to greet our group. It was nice to see him again.

In one of the winery pairs was Flat Creek Estate’s signature wine, the Super Texan. Madelyn described how to read the different parts of a label and then explained that one year, they could not get Texas grapes for the Super Texan. They had submitted the label for approval as before but the government said they could not use the word “Texan” since it was synonymous to “Texas” on the label which meant the wine had at least 75% Texas grapes. She said they tried to explain it was a fanciful name but could not convince the government, so they had to resort to filing an exemption and using “For Sale In Texas Only” on the label to use the name Super Texan. She said they were not trying to deceive anybody and they could have put American on the label, but that isn’t telling anything either. The point of not trying to deceive is proved by some of their wines having American on the label like their Syrah 2009.

After the tasting was completed, Madelyn gave everybody a tour of the production facility where it ended in the barrel room. Everyone had a great time at Flat Creek Estate and if you get the chance, definitely take a production tour and tasting.

Back in the van it was decided the next winery to visit was William Chris Vineyards. As we pulled into the winery, the usual crowd of cars was evident. When we entered the winery, Carol Blackmon greeted us and found a room where our group could do a tasting. William Chris was also the first winery of the day in which we could get a stamp for the new #TXWine Passport App available for your smartphone. 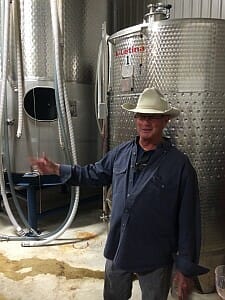 During our tasting co-owner Bill Blackmon greeted us all and it was nice seeing him again. The wine Hunter is usually on the tasting menu but Bill said they would be bottling the new vintage in a couple weeks. We also learned why there is always a crowded parking lot when we found out the wine club, the Hye Society, has around 2,000 members. He said to finish our tasting and he would catch up with us later. Everybody enjoyed the tasting and Bill came back and took our group to the winery. There we had the chance to taste the new Hunter from the tank, which a lot of our group being red wine drinkers, really liked. We were then surprised to taste a Sangiovese which will soon be bottled too. This will make a nice addition to the portfolio. We all thanked Bill for the special treat and said goodbye.

We all enjoyed William Chris Vineyards and so far the part of the group who had not visited Texas wineries were having a great time. The next winery to visit was Pedernales Cellars. We arrived at Pedernales and upon entering the tasting room, there were a lot of people which is common for a weekend. Everybody loves getting out on the weekends to visit wineries and the weather was perfect for it. 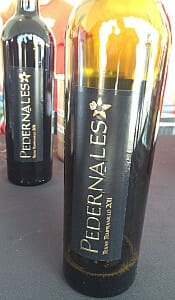 We found a location at the tasting bar and started a tasting. Gloria and I had Texas Hill Country Wineries wine trail tickets for the month of October and the wines offered at Pedernales Cellars were three Tempranillos. All were very good and a bottle was packed in the van upon leaving.

The rest of the group had a normal tasting and enjoyed the wines Pedernales offered. They also were able to come away with a wine glass. The group was enjoying every winery so far so that was nice to see.

The next winery to visit was Becker Vineyards. When we arrived and saw the full parking lot, we knew it was going to be another crowded time in the tasting room and we were correct. It was confusing where to go when we entered since one sign said wine trail tickets were to stay there and the rest of the group decided to find a spot at the tasting bar. Later greeters were available to direct people and help us get another stamp on our #TXWine Passport. After Gloria stood in the long line, she was told to just go into the tasting room with the wine trail tickets. 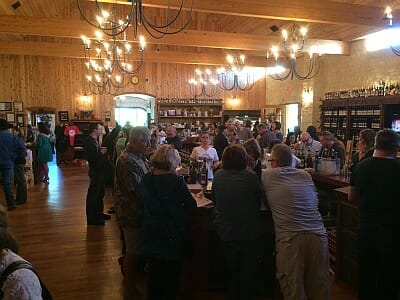 We waited until the rest of the group bought tasting tickets and eventually we found two spots at the end of a tasting bar where we could do our tasting. We all could tell the huge crowd that is always there on weekends eventually takes its toll on the tasting guides. If it had not sold out already, I would have suggested to pay for the special Library Tasting available at the winery where a more intimate tasting experience could have taken place.

Since there was still time before most wineries close, it was decided to go to Messina Hof Hill Country. We entered the winery and even though the tasting bars were full, there was peaceful tranquility in the winery. One group was just leaving and we bellied up to the tasting bar where they left and general manager, Dena Kasberg, was there providing the tastings. It was nice seeing her again and for full disclosure, Gloria and I in addition to one other couple are VIP members at Messina Hof, if it really matters to anybody. 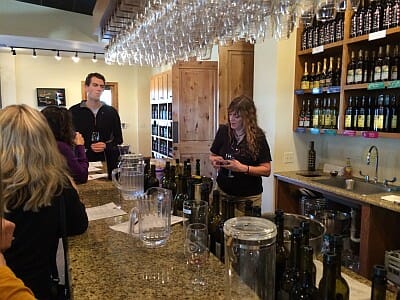 The group selected five wines for each tasting and some decided to just buy a glass of wine and sit outside in the nice weather to enjoy it. After the rest of us finished a tasting we joined them outside. We then realized we had dinner reservations and needed to get back to the resort.

It was a long drive back to the resort and people enjoyed talked about the fun time they had during the day. It was definitely nice not having to worry about driving and I can see the benefit of signing up with a tour company and visiting wineries that way. Look for a tour company, visit some Texas wineries, and enjoy some Texas wine!

A new page has been created where you can view a list of some of the tour companies who visit Texas wineries.