October 11: Bending Branch Winery is pleased to announce that we have been awarded a total of 11 medals, including a prestigious Double Gold, in the 2013 San Francisco International Wine Competition. We feel that the significance of this elusive medal is considerable. The Double Gold is awarded to a wine that has unanimously received a Gold Medal from every judge on the panel. The 2010 Bending Branch Winery Cabernet Sauvignon, Newsom Vineyards, was awarded this medal in what is indisputably the most competitive and widely submitted varietal category.  The exceptional grapes for this wine were sourced entirely from the Newsom Family Vineyards in the High Plains of Texas and were processed using the most rigorous of qualitative measures from harvest to bottle.

Viticulturist Neal Newsom stated, “The Newsom Family Vineyard is happy to have one of Texas’ oldest grown Cabernet vines going to one of Texas’ newest wineries, creating a great team that is producing Double Gold winning wines at SFWC.”

It was confirmed with the San Francisco Wine Competition offices that there has not been another 100% Texas Cabernet Sauvignon awarded a Double Gold in the last sixteen years of the competition.  It is believed the only prior medal was awarded to a Texas Cabernet in the mid-1980’s.  Much like the wines of the fabled 1976 ‘Judgment of Paris’ we are proud of the success that will lend media, consumer and critical attention to the exceptional potential of our unique Texas terroir. 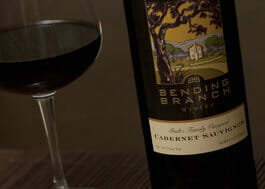 Produced in very limited quantity, there are only 15 cases of this award winning wine currently available.  It is also available on the menus at Bohanan’s Prime Steak & Seafood and The CIA’s own restaurant, NAO, both in San Antonio.  This wine will also be featured by the San Francisco International Wine Competition Double Gold Medal tasting available for media and trade in both Dallas and San Francisco during the month of October.

Official results can be found at http://sfwinecomp.com/results/overview

With the desire to expand our Texas Grown wine program, we have chosen the unique Cabernet fruit of the Texas High Plains grown by one of the states Premiere Viticulturists, Neal Newsom.  While Cab can be a difficult grape to grown in the Texas terroir, we have found the quality of aromas of flowers, nutmeg and chai ready the palate for this rich and velvety Cabernet Sauvignon.  Intense Bing cherry fruit laced with dark cocoa, walnut and cranberry notes offer a wine that is well balanced in texture and flavor.  The well integrated tannins and strong acidic backbone make this a wine of intense complexity and underlying elegance that is easily compatible with any cuisine. Our team has found this fruit to be of outstanding character and have given our closest attention to controlling the quality of the harvest with hand sorting, gentle destemming and leaving whole berries of our fruit while on location in the High Plains to minimize transportation.

SUGGESTED FOOD PAIRINGS: This versatile wine will be just as pleasurable without a meal, as it will be with four star cuisines.  The softer tannins allow this Cab to pair well with red sauce pastas, pork, venison and poultry.  For the more traditional red meat pairing leaner cuts of meat will benefit from this finely nuanced wine such as Filet Mignon.