We started the session with a toast of sparkling wine by Iron Horse Vineyards. The sparkling wines available were Iron Horse Brut Classic, Russian River 2008 and Iron Horse Wedding Cuvée, Green Valley 2008. They were served for the movie along with, of course, popcorn.

There was a lot of laughter and applause during the movie. When the movie was finished we were introduced to people in attendance that had been in the film such as Fred Dame MS, Geoff Kruth MS, Jay Fletcher MS, Guy Stout MS, Drew Hendricks MS CWE, and one of the candidates DLynn Proctor.

Director Jason Wise took questions from the audience and people in the room also asked questions of the others who were in the movie. The movie took three years to create and it has given a great understanding of what it takes to become a Master Sommelier.

One interesting question asked was why the wines of the blind tasting for the Master exam are not given. Jay Fletcher explained that the blind tasting is done with points on each wine, not just the final declaration of what the wine was. And to remember the primary purpose of a Sommelier is to describe the wine, not just tell you what it is because they can see that by looking at the label. 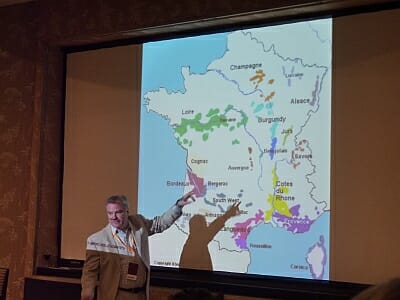 The wines tasted and discussed were:

One of the wines discussed is by Nicholas Joly who is one of the pioneers and leading personalities of the biodynamic wine movement. It was stated when the wines are on, they are awesome but they also can have the tendency to be a little off. It was recommended when you have some that are on, drink them quickly.

More Muscadet is produced than any other Loire Valley wine. The Quarts de Chaume was a very nice wine but there are only five or six producers. It had been another interesting seminar at TEXSOM and gave a better appreciation for the wines from Loire Valley. 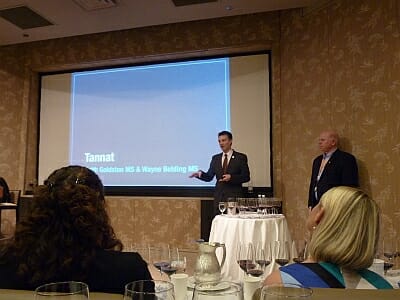 My next seminar was “Varietal Focus: Tannat” and I chose it partly because Tannat is becoming more popular as a Texas wine. It was presented by Keith Goldston MS and Wayne Belding MS.

Tannat is on an upswing as being a wine with bold and heavy tannins. It is a rugged grape which grows well in heated regions. It was first trumpeted in Uruguay by Pascal Harrigue in 1870. Tannat’s high levels of procyanidins reported to be one of the main reasons that the Gres region of France has twice the average of nonagenarian in 2006. Tannat’s biggest growing regions are France, Uruguay, California, Virginia, Texas, Illinois, Georgia, British Columbia, Argentina, Brazil, and Peru.

I enjoyed seeing Goldston and Belding’s trip to Salta and Argentina especially since I had visited Mendoza and other parts of Argentina earlier this year. They later visited Uruguay and showed photos from that trip. It was a very interesting seminar on a wine which is growing in popularity.

After dinner it was time for the Grand Tasting. Can we say wines? Many tables were set up in the ballroom and outside of the ballroom with many fine wines. Even top brands such as Opus One were there. 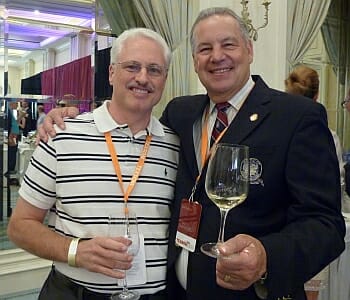 Fred Dame and me

When I was tasting wine at a table, Fred Dame MS (remember he was in the movie SOMM and was the first American to successfully pass all three parts of the Master Sommelier Examination in a single year) came by to taste. I asked to take a photo of him but he only would if I was in the photo too.

It was then time to announce the winner of the 2013 Texas’ Best Sommelier Competitors. 24 sommeliers from around Texas participated in the competition. Winner of the competition was Scott Ota from Austin. As I was standing watching and waiting to congratulate Scott, I felt a hand on my shoulder and it was Fred Dame who said, “Boy’s got game. Just what we’re looking for and you tell him that.” Which I did when I congratulated Scott Ota. 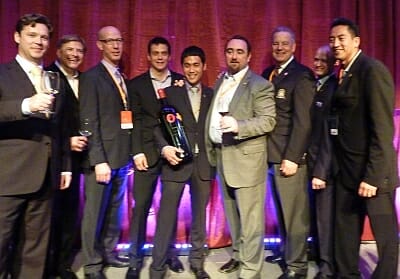 Unfortunately the end had come to another great year at TEXSOM. See you next year and sign up early!