Hye Meadow Winery is located in appropriately enough, Hye, Texas and is owned by Mike and Denise Batek. Jeff Ivy is the winemaker. On Saturday, August 3rd 2013, Hye Meadow Winery had its Grand Opening. I made the trip to visit and see the progress of the winery construction since we last visited the winery in May.

Wine friends and fellow bloggers Robin English-Bircher and Sean Bircher were already in the tasting room and I joined them for a tasting of Hye Meadow Winery’s wines. Later January Wiese, Executive Director of the Texas Hill Country wine trail, eventually joined us along with KK Taylor, owner of the Lazy T Bed and Breakfast. 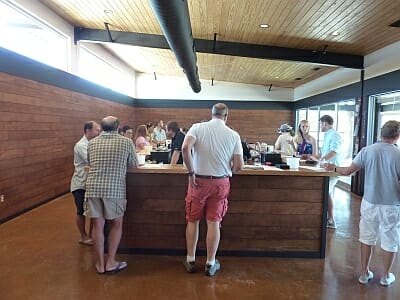 Tastings are done while standing at a beautiful rectangular tasting bar complete with a barrel stave countertop. There is a tasting fee and crackers are served to cleanse your palate. 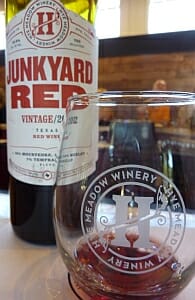 Since Hye Meadow Winery is just opening, some of their initial grapes come from Washington State while others use Texas grapes. Their eventual goal is to use 100% Texas grapes if possible. These are the wines we tasted:

Also on hand, probably only for the Grand Opening, were two very refreshing drinks served with Chambord liqueur. A snow cone machine was rented and the first drink was Chambord and the Hye-Albert Cuvee served over the ice. The second drink was the Orange Muscat served over the ice with a touch of Chambord added. These were served at a bar in the back of the winery on the large patio. It was surprising with it being hot outside, there was a great breeze rolling through the back of the winery which kept things bearable.

The patio has seating for enjoying a glass of wine. On hand for the Grand Opening was the award-winning Peached Tortilla food truck which provided a delicious lunch to also enjoy while sitting on the patio. It is unknown at this time if a food truck will continue to be used because the adjacent event pavilion does have a full kitchen available. Also at the pavilion is a long covered patio area with tables and chairs, including a staging area for events such as music and weddings complete with dressing rooms and bathrooms for both bride and groom. Three wood decks have been built in different areas to provide more seating area and room for live music. 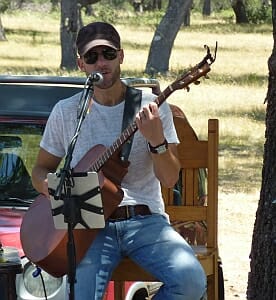 Speaking of live music, at the Grand Opening Mike and Denise Batek had their good friend Joe Dalton check out the property and write a song for the winery. Mike wanted Joe to cover the Garth Brooks song, “Friends in Low Places,” fitting since the Hye Meadow Winery wine club is called “Friends in Hye Places.” But Joe went to the property, drove the country roads, and as Mike said, “got all mushy.” He ended up writing an original song for the winery called “Hye Meadow.” They passed out CDs at the Grand Opening event and Joe Dalton provided acoustic live music and also played the original song “Hye Meadow.” 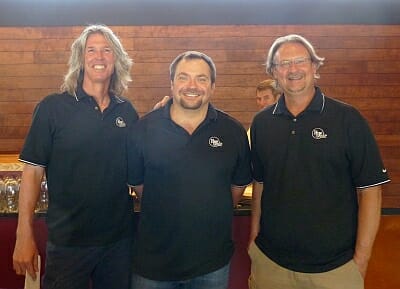 Hye Meadow Winery plans on eventually planting a vineyard at the winery, perhaps growing Trebbiano. The production building in front is coming along with stainless tanks, press, and other equipment arriving recently. This will be a state-of-the-art production facility complete with integrated cooling systems which Mike grins when saying, “I can control each tank from my phone!”

One cool thing Hye Meadow Winery has done is put chalkboard along some of the wall trim in the tasting room where people can write things. It didn’t take long for Robin’s and my website addresses to go up on the wall. We’ll see how long they stay. Mike, get that permanent clear coat paint out!!

Even though it was the Grand Opening, there were still tour buses arriving and a steady crowd during the day. I don’t think I’ll have any problem recommending Hye Meadow Winery as a must-see winery in the Hye area next time you are on the 290 wine trail.