Endless Summer Vineyard & Winery is located in Fort Pierce, Florida and is owned by Gary and Susan Roberts. Gary is also the winemaker. The winery opened July 2012.

We were pleased to hear while visiting Jeff’s parents in Fort Pierce that there was now a winery nearby we could visit. We all took the short drive to the winery to see how a winery in Florida compares to the ones in Texas. 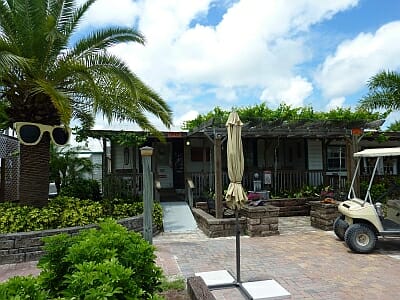 When Gary and Susan Roberts were thinking about opening a winery, they visited every Florida winery and even out of state wineries for research, and then developed a 35 page business model. They brought a consultant in to help and he immediately said you need to do something with the palm trees present as he was not aware of any other winery with palm trees. One thing the consultant said which Gary Roberts remembers is, “The winery should embody the spirit of the owner and the spirit of the area in which the winery exists.”

Besides Gary’s nursery and landscape business next door to the winery, he has been a surfer his whole life and has collected surfboards since 1972. He decided since Fort Pierce is more tropical he would design the winery to fit the nature of the area. The winery and grounds fit that model from the landscaped pond with white sand beach to the vintage surfboards mounted in the tasting room. 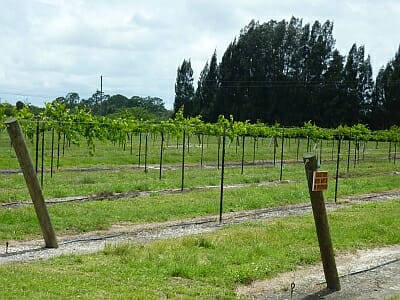 While driving up to the Endless Summer Winery, there is a large vineyard in front and to the rear of the winery. We learned later it is 10 acres of Muscadine grapes growing three varieties of the 300 available Muscadine grapes: Carlos (white grape), Noble (red grape), and Doreen (white grape) which they are not using yet. There are about 1200 vines spaced 20 feet apart and the rows are 12 feet apart.

We entered the tasting room and the tasting bar was full of people enjoying the Endless Summer wine. We first looked at the very large gift shop which included clothing, wine accessories, Florida gifts, and much more. 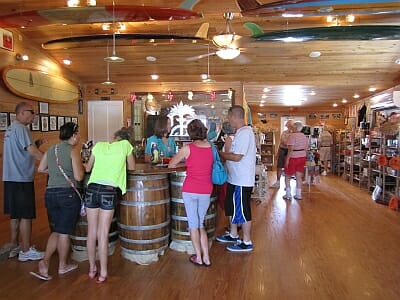 Gloria and I stepped up to the tasting bar to begin our tasting. We had a choice of two tastings, one with a tasting fee which was done from a plastic glass and a little higher tasting fee done with a glass wine glass and we could keep the glass. That was pretty much a no-brainer for us as we did not understand why anybody would want to drink wine out of a plastic glass unless you were outside at a picnic or other event.

The tasting fee includes all the wines they have including two juices at the end of the tasting. At the time of our visit there were 9 wines to taste. The bottles were uncorked and the tastings are poured from the bottle. Wine crackers are available to cleanse your palate.

We have been to wineries in Texas which serve Muscadine wine and to be honest, we have not preferred them but since Muscadine is popular in Florida and Endless Summer Winery only makes wines with Muscadine grapes, we thought there might be a difference between the wines produced. Endless Summer Winery right now uses the juice of the various grapes since their vineyard is still maturing.

Continuing with the tropical/nautical theme of the winery, we enjoyed the names of the wines such as “Rated Arrr” which is the Noble grape blended with Merlot. “Marlin Monroe” is the Carlos grape blended with the Chambourcin grape. My favorite name was for their Port-style or dessert wine. They could not call it Port so instead they called it “Not Starboard.” The winery has already won 16 medals for their wines.

We finished the wine tasting and unfortunately our opinion of Muscadine wine had not changed. We had the two Muscadine juices, a Carlos and Noble, and surprisingly they did not have that same typical Muscadine taste and were fine. My only guess is something in the winemaking process makes Muscadine taste different.

I was really curious about Blanc du Bois since the grape had been invented in Florida and some Texas wineries make very good Blanc du Bois wine, but was curious why Endless Summer Winery was not making Blanc du Bois. Tours are available at the winery which are 45 minutes long and cost $8 per person. We had to go on a tour to find this answer in addition to being interested in the entire winery.

Unfortunately tours require a minimum of 6 people and since there were only 4 of us, I tried convincing others in the tasting room to attend a tour so we could get the required minimum. I didn’t have any luck convincing people, but eventually did find 2 people who would take the tour if I paid for it. $16 extra dollars later we were finally off to take our tour. 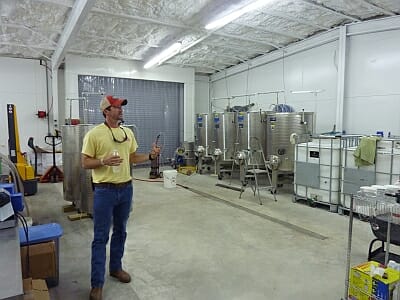 We met at the tour starting location and were greeted by Allen who is the stepson of Gary Roberts and son of Susan. He gave a very interesting tour about the winery which also included some history of wine in the United States.

At the moment there are 28 Florida wineries. Endless Summery Winery is the first and currently only vineyard and winery on Florida’s Central East and Southeast Coasts. Besides the 10 acre vineyard, there is a festival area, shaded wooden swings, and a 2,300 square foot pavilion all available for rental. Endless Summer Winery holds live music, festivals, and other events and has had crowds up to 600 people at an event.

Allen told us the first documented wine which was made in the United States was Muscadine in 1565 near Jacksonville, Florida. In addition the first vineyard was in Florida near Tallahassee which was at a Spanish mission.

The three Muscadine grapes they grow are harvested late August to early September. Muscadine grapes do not clump, they cluster, meaning they have to pick the grapes one at a time instead of harvesting a group of grapes at once. The grapes ripen at different times and they stop ripening once they are picked off the vine. They pick just the grapes that are ready and go back during the approximate 6 weeks harvest to pick the rest of the grapes. Approximately 6 1/2 to 10 tons of grapes per acre can be harvested with a fully mature crop. The vines in the current vineyard were brought in as 3 year old vines and are now almost 6 years old. Muscadine grapes take about 6 years to be fully producing unlike vinifera grapes, so they are reaching the point where Endless Summer Winery can start using estate fruit in their wines. 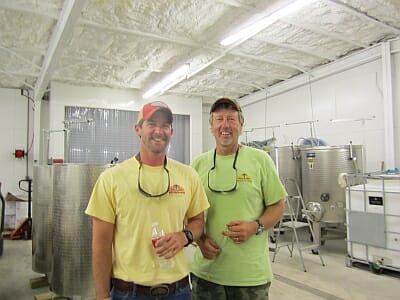 It was time for me to ask about Blanc du Bois and Allen admitted that Blanc du Bois could be grown where they are, but he had tasted the wine once at a Florida conference made by a Florida winery and had not cared for it. He also said Blanc du Bois requires a lot more work and fungicide to grow the grapes. It is a shame he could not try some of the great Blanc du Bois wines being made in Texas. As one winemaker said after the fact, Blanc du Bois was invented in Florida but perfected in Texas.

We finished the tour in the production facility where Allen described how they make their wine including adding regular sugar to the wine. We also got the chance to meet owner Gary Roberts. It was a nice visit to Endless Summer Vineyard & Winery and even though my parents do not drink, they even enjoyed the time spent at the winery.