Perrine Winery is located in College Station and is owned by Beth Perrine Leopold and Rick Leopold. I wasn’t sure of the correct pronunciation of Perrine and was told the last part rhymes with “wine.” The winery opened Thanksgiving Day in 2011 and Rick does the winemaking.

We had tasted a couple of their wines at a festival last year and I was finally able to make a trip to the winery. Perrine Winery is very active on Twitter so it was nice to really talk to the people behind the Twitter account. 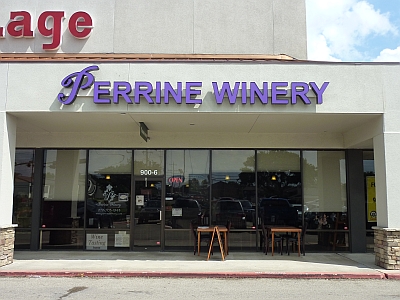 Perrine Winery is located in a shopping center and is very easy to find. The custom micro-winery does not have a vineyard even though both Beth and Rick grew up in the agriculture business. After a couple years of research, they decided to start a micro-winery which could be something to have ready for retirement. 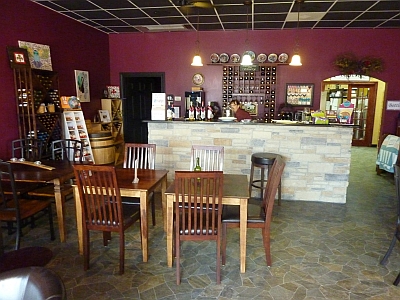 The tasting room has comfortable couches, chairs, and tables and I could see why people would enjoy stopping by after work for a place to enjoy a glass of wine. Beth and Rick were both present and they walked me through a tasting.

There is a tasting fee for six wines and trying to decide which ones is a challenge since Perrine Winery makes over 50 wines. There are four series of wines available:

Tastings are poured from the uncorked bottles and you can stand at the tasting bar or sit at a table. Crackers are served to cleanse your palate. You can buy a meat and cheese plate or gourmet chocolate bars, but they welcome food to be brought in whether you bring it yourself or have it delivered. You can buy a glass of wine or bottle to enjoy after a tasting. 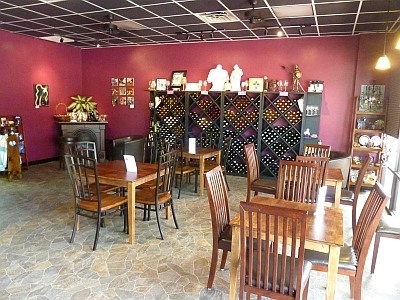 One thing I learned during my visit is how Perrine Winery works with the neighboring businesses. They do various things like provide wine to a store to make chocolate truffles and wine for business parties. A nearby business makes cupcakes and Perrine Winery offered their selection of wines with cupcake pairings:

Perrine Winery enjoys food pairing as they have also paired their wine with flavored pecans from Royalty Pecan Farms in Caldwell:

They have become so good at food pairing they have even been asked which of their wines pairs best with a McDonald’s Happy Meal. 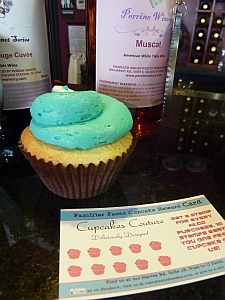 Events like parties, birthdays, showers, art/wine classes, and live music are held at Perrine Winery. In addition they also come up with very innovative events which are offered at the winery such as Teacher Tuesday, De-stress Wednesday, and Thursday Nurse’s night.

Since Perrine Winery offers over 50 wines, they decided recently they needed to stop making a few wines so they came up with a Survivor Flight which is a take on the television show Survivor. They have 8 wines on the “island” and people can vote for their favorites on the list. At the end of 7 weeks, the lowest scoring 3 wines will be voted off the winery and retired from their cellar. 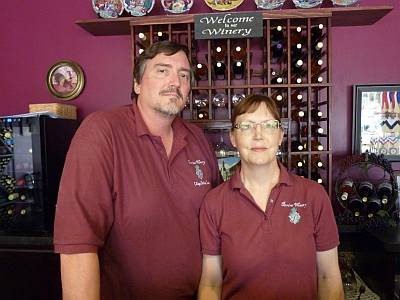 With a large selection of wines available, make a trip to relax at Perrine Winery.

I just ran across your site. Very impressive. Y’all really love our Texan wines. I myself live in Dallas – studying to be a sommelier and offer tours to wine regions. I always thought of living somewhere like Napa or Sonoma – some place where wine is “happening”. By taking inspiration from your blog (exploring Texas wineries), I think of this lyric: “you can’t always get what you want, but if you try sometime, you get what you need.” Rock on!

Thanks Kay. What turned out to become a hobby of visiting Texas wineries and enjoying Texas wines has become an obsession. You have a lot of good wineries in the Dallas area to explore!

Share this
MENU
wpDiscuz
2
0
Would love your thoughts, please comment.x
()
x
| Reply
Send this to a friend