In order to store our white wines we have two small wine coolers, an eight bottle and a twelve bottle cooler. Besides those we use a dorm fridge but we are unable to keep it at the correct temperature since the freezer portion would drip with water, so we need to keep the wines cooler than we want. We were seriously talking about buying a bigger wine cooler, especially one which could properly store red wines too in the hot Texas summers meaning a dual zone wine cooler. Coincidentally an offer came to review the NewAir wine cooler, model AW-321ED 32 bottle dual zone wine cooler which we agreed to do without hesitation. 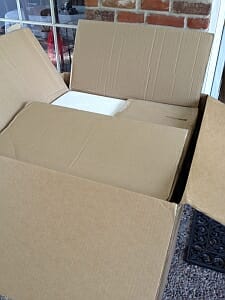 NewAir makes a variety of thermoelectric and compressor wine coolers. Thermoelectric coolers cannot get as cold as a compressor model, but they are quieter to operate. The NewAir AW-321ED model is a thermoelectric model. It is a freestanding wine cooler and instead of the usual metal wine racks, the black cabinet with stainless steel trimmed doors has wooden shelves for the bottles of wine giving the wine cooler a very classy look. Of course with it being a dual zone cooler, it has two independently controlled temperature zones so you can store red and white wines at different temperatures.

The NewAir wine cooler arrived and while opening the box we could immediately tell this was a quality appliance without even seeing it. It had been shipped double boxed with foam between the boxes ensuring the unit would arrive safely. The hardest part was getting the cooler out of the boxes without ripping the boxes and trying to keep the unit upright. 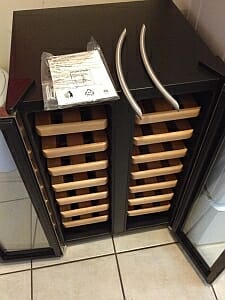 We had already cleared out space for the wine cooler and upon putting it in place, could see there were only a couple things which needed doing without reading the manual. But as I always do, I read the short manual cover to cover and then started finishing assembly. Fortunately the only assembly was simply putting the stainless steel handles on with screws coming from the inside on the insulated glass doors which help reduce UV light. The wine cooler was soon ready to be plugged in.

The instructions said the NewAir wine cooler should be kept upright for approximately two hours before plugging into a power supply. Since the cooler had arrived earlier in the day via FedEx and it had been sitting waiting for us to arrive home from work, we went ahead and plugged it in. But before using it first, the instructions said the interior should be cleaned with a soft cloth and lukewarm water which I did. This was actually harder than I anticipated since my hand had trouble fitting between the wooden shelves and even though the shelves must be removable, I could not find an easy way to remove them and did not want to take a chance on breaking something. Since then I discovered how to remove the shelves and it is very easy to do so. The next step was to ensure the wine cooler was level and even though it looked good, I found my level and sure enough, everything was perfect so I did not have to use the leveling feet on the wine cooler.

The next day we noticed neither digital gauge was getting to the temperature we had set. Looking through the troubleshooting part of the manual, there was an item: “The wine cooler does not get cold enough.” One of the suggestions was: “The wine cooler does not have the correct clearances.” We looked at the placement of the cooler and sure enough, there was not enough air flow in the rear of the cooler where four fans are so we solved that problem. Soon the temperatures were being lowered. By the way, there are vents on each rear side of the wine cooler where heat comes out so we made sure those had enough clearance too.

Our measurements of the wine cooler are 32.25 inches high, 20.75 inches wide, and 20.5 inches deep. Remember though that the wine cooler needs clearance around the rear vents so add more to the width and depth.

We waited again to look at the digital gauges and the red side had reached 55 degrees but the white side only got to 47 degrees. Reading the manual again I found this paragraph: “For optimal performance, it is recommended that you keep the wine cooler in a place where the ambient temperature is between 50 ‐ 80°F (10 ‐ 26°C). If the ambient temperature is above or below the recommended temperature range, the unit’s performance may be affected. Using the wine cooler in extremely cold or hot conditions may cause interior temperatures to fluctuate, and as a result, the ideal range of 50 ‐ 60°F (10 ‐ 16°C) may not be reached.”

That explained why we were not reaching 46 degrees. It had already reached summertime temperatures in Houston and our house thermostat is set to 80 degrees when we are home. Between that and a higher programmable temperature during the day, it was understandable the wine cooler would be struggling to get to 46 degrees. However in the mornings when we looked after a cooler night, 46 degrees was displayed.

Next up was the internal temperature test and we first placed our thermometer at the top of the wine cooler on the first shelf. We later placed it on the bottom shelf. The temperature of the thermometer was always higher by one or two degrees compared to the digital gauges of the wine cooler, but I could contribute that to a cheap refrigerator thermometer. Besides, one or two degrees do not seem to matter as long as you are getting the wines chilled instead of sitting out in the hotter temperatures of the house. 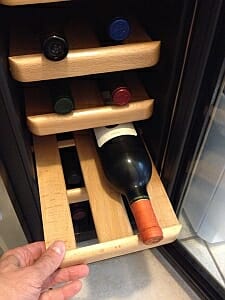 We had no problems storing wines in the wine cooler. I was afraid the length of some of our bottles would be a problem as with our smaller coolers but the NewAir AW-321ED had no problems storing them with the depth. If the bottle is short, it fits within the entire shelf otherwise the neck of the bottle hangs over the edge of the shelf. Since it is a 32 bottle wine cooler, 16 bottles can be stored on each side which means 8 shelves on a side. Seven shelves are wooden pull out shelves while the bottom shelf is the actual bottom interior of the wine cooler. We tried testing a couple larger bottles like a Champagne and Riesling bottle and they would not fit in the wooden shelves, but they fit fine being stored on the bottom shelf. We could even fit two large bottles together on the bottom shelf. 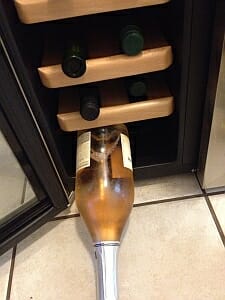 We used the wine cooler for over a week and had no problems with any part of using it. In fact since the wine cooler is only roughly 33 inches high, I was starting to look at how two of the wine coolers could possibly fit on top of each other to make one nice big wine cooler. The NewAir AW-321ED 32 bottle dual zone wine cooler was excellent and if it is any indication of NewAir quality, we would not hesitate to recommend this wine cooler or any other NewAir wine cooler to protect your valuable wines. 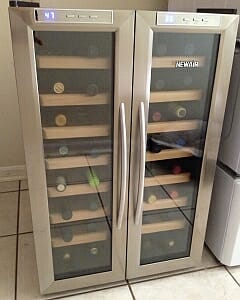 This NewAir wine cooler can be seen at Air-n-Water.com