La Fuente Winery is located in Houston and is owned by Rogelio de la Fuente, also known as the “Wine Doctor.” Don de la Fuente was born in Florence, Italy to an Italian mother and a Mexican father. His family moved to Spain and then to Mexico. He came to the United States at age 16, later joined the Marines and served in the Korean War. Today don de la Fuente is 82 years young.

We were not aware of La Fuente Winery until the great people at Dionisio Winery told us about the winery. A Groupon for La Fuente Winery coincidentally came out around the same time and I purchased two tastings at the winery. Tastings at the winery are available only on Saturday afternoons or special tastings can be done by appointment by booking the tasting room during the week, or even in your home or office. If you have a group of 8 or more people, you can host your own tasting party. 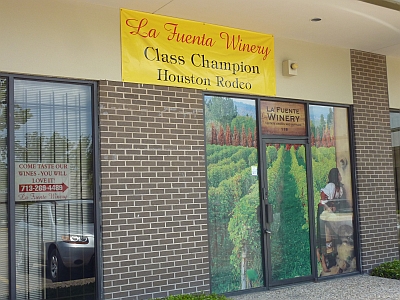 The day came for our Saturday tasting appointment and we found the winery in a warehouse area in Houston. When you enter the winery there is a large tasting room, but for the Groupon tasting we were directed to the back of the winery to a larger area for the tasting with the rest of the people who had come.

Tables and chairs were available as well as one couch. As people stood around talking, don de la Fuente greeted everybody and had everyone take a seat. When he greeted us and learned we were engaged, he had us sit on the couch as he considered it more romantic. Candles were eventually lit and the lights were dimmed for a nice atmosphere for the tasting. 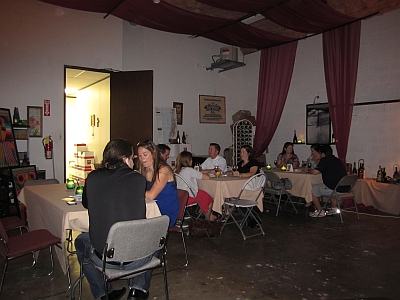 There is a tasting fee, not to mention the Groupon which we used, and we got to taste five wines. The tastings were poured from the uncorked bottles and they were very generous pours. You can also pay extra for glasses of wines in addition to other winery’s wines, and when purchasing a glass of wine the wine glass is included. Crackers and fruit are given to cleanse your palate and best of all, later on a great enchilada is given.

During the tastings don de la Fuente circulated among the guests. As we learned, he loves the marketing side and enjoys talking to people. We were very impressed he remembered our names whenever he circulated and arrived to us to talk. 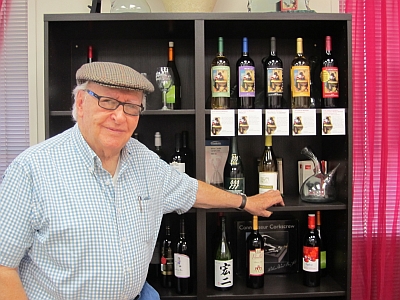 We learned that don de la Fuente has been making wine for many years. He used to work for E & J Gallo Winery and made the former Boone’s Farm apple wine. In the 1970’s the Italian government gave him the name of the “wine doctor.” After joining some financial partners, don de la Fuente started working on his first releases of wine in Chile’s Maule Valley. La Fuenta Winery was opened in 2003. Don de la Fuente’s partners make wine they prefer and he makes wines like he wants. The exception is Carmenere which they both make the same.

Carmenere is a grape which is primarily grown in Chile. Chileans had taken the vines from France to Chile and for many years the grape was mistaken as Merlot. In 1994 a foreign enologist came to Chile and proved to the Chileans that this particular grape was not Merlot, but Carmenere. The grapes look alike except the leaves are different and the Carmenere ripens later than Merlot.

La Fuente Winery’s Sauvignon Blanc is made New Zealand-style and it has been entered in four big competitions such as in New Zealand and France, and has won a medal in every one. The winery has entered their wines in the Houston Rodeo International Wine Competition and has been a medal winner now for the sixth year in a row. Rodeo medal winners from this past year are the 2011 Carmenere (gold), 2011 Chardonnay unoaked (gold), 2011 Merlot (gold), and 2011 Sauvignon Blanc (silver).

Don de la Fuente does not use oak barrels for their white wines. The red wines are 100% single variety, no blends, and are aged three months in French oak. La Fuente Winery also sells their wines in Holland and England. The partners sell in the rest of Europe. Between La Fuente Winery and the partners, they produce 100,000 cases of wine a year. 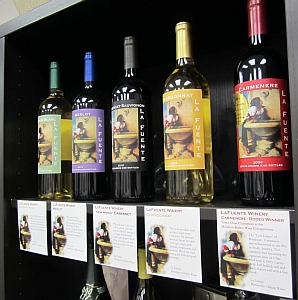 Other wines offered for sale are:

The Cabernet Sauvignon was lighter than and not as bold as other Cabernets we have had and we enjoyed it very much. La Fuente Winery also makes a Magic wine which is deemed the romantic wine. It is a sweeter wine and the “wine doctor” makes it in Houston.

The label on La Fuente Winery’s bottles is a reproduction of Léon Bonnat’s “Roman Girl at a Fountain,” which hangs in the Metropolitan Museum of Art. In fact, La Fuente Winery is the only wine to be in the Met. 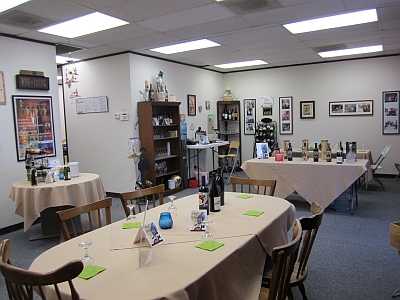 Don de la Fuente said he plans to eventually move the winery to another location in Houston in a year or two to become more visible, accessible, and secure for his customers. He shared some great ideas he has for the new location.

We had an enjoyable time during our tasting drinking the wines and the engaging conversation. We recommend visiting La Fuente Winery when you are in Houston.