I saw people commenting on the great time they had at Blue Ostrich and could not wait to make a trip to the winery. I met John Fredrick’s wife Danna at the Texas Wine and Grape Growers Association (TWGGA) Grape Camp last year and Julie Whitehead at this year’s TWGGA Conference. Of course like most people in the wine industry, both were very nice and I was more excited to make the trip to Blue Ostrich.

I finally had the opportunity to visit Blue Ostrich with four of my friends. The weekend we chose to visit Blue Ostrich, both Blue Ostrich and Arché were co-hosting an event in the evening. Even though the event sounded great, we decided to visit the wineries earlier so we could do a normal tasting and meet whoever might be there without a crowd present. It turned out to be a great idea. 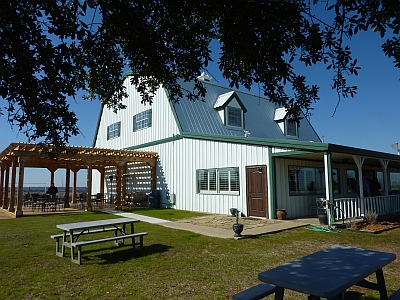 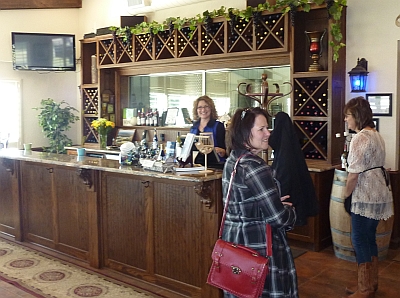 There is a tasting fee for four wines and you can get additional tastings for $1 each. A higher tasting fee will allow you to taste five wines and you get to keep the logo wine glass. The tastings are poured from the uncorked bottles and crackers are available for cleansing your palate during the tasting. You can also buy a cheese board to enjoy at the winery.

During our tastings we met Patrick Whitehead and because they were getting ready for the evening’s event, John Fredrick was available to visit with us too. We talked about the grapes and wines produced. Blue Ostrich uses approximately two thirds of their grapes from Texas with the rest of the grapes coming from New Mexico and Borra Vineyards in Lodi, California. Since they are not yet using 100% Texas grapes, they said instead of using substandard fruit and producing bad wine, they prefer to bring in out of state fruit to produce quality wine.

Blue Ostrich currently has seven acres of vineyards with Tempranillo, Viognier, and Cabernet Sauvignon. They are planting one acre of Merlot and Moscato Giallo. They were able to get Zinfandel grapes from Tanglewood Vineyard near Brenham, Texas and produced 40 cases of the wine. Since the wine has been so popular, they are having it available only for the wine club but we were fortunate to be able to taste the Zinfandel. Join the wine club!

Patrick and John then gave us a tour of the winery. We learned in 2012 they produced 1,300 cases of wine and are hoping to double that number in 2013. Since Patrick is the winemaker and John is the vineyard manager, as we entered the production facility we learned the difference between a winemaker and grower in August is 50 degrees. *rimshot*

Blue Ostrich uses both French and American oak barrels in their winemaking. We were able to taste both unfinished Malbec and Orange Muscat which are going to be good. John showed us the vineyard located behind the winery. 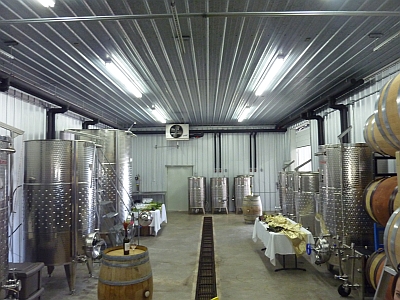 We returned to the tasting room after our tour and looked at the gift shop which includes clothing, wine accessories, and more. As mentioned previously, there is a wine club available for customers.

Blue Ostrich prefers to give a story on the back of their wine bottle labels. Popular wines at Blue Ostrich are:

After a tasting, you can buy a glass of wine and enjoy drinking it at a table inside the tasting room, or better yet if the weather is nice sit on their large patio under a pergola. 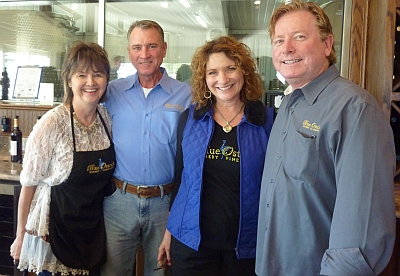 We all had a wonderful time visiting Blue Ostrich and enjoyed the hospitality from everybody there. After our visit in the tasting room, a couple of us had to go say hello to the ostriches near the winery. 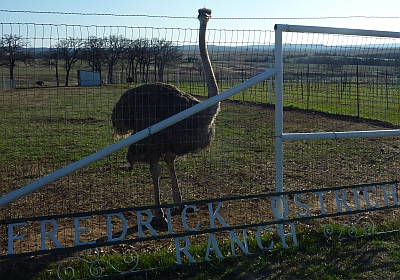