Registration began at the new Texas Custom Wine Works facility on the south edge of Brownfield. We had visited the location last year which was just a dirt lot at the time after Dusty Timmons gave us a tour of some High Plains vineyards. We were fortunate to meet the other partners at the time: Jet Wilmeth, Dr. Steve Talcott, and Mike Sipowicz. We saw the partners again at this year’s TWGGA Conference and Dusty commented the building was coming along and it needed to be ready by the time of the High Plains Vineyard Tour. 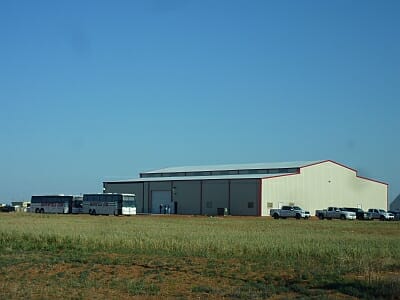 I found the location of Texas Custom Wine Works which now housed the facility and there was no missing it as the building is enormous. After registering with coordinator Scott Russell from the Texas A&M AgriLife Extension Service, I walked inside the building to gape in awe like others around me. The building is still being completed but it is an impressive sight to behold and I cannot wait to see it in a completed state. The building is 16,000 square feet and if you add the upstairs floor, it is 24,000 square feet.

Before leaving for the tour, I had to complete a task which was almost a year in the making. We had taken a photo of the Texas Custom Wine Works partners standing in the dirt lot and they recommended we come back at harvest time in a year to take the photo again with the building behind them. It hasn’t been a year but since we do not make it often to the Lubbock area, it was time for the photo. Unfortunately Dr. Steve Talcott was out of town, but here is the before and after photos. 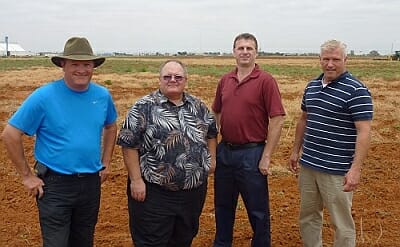 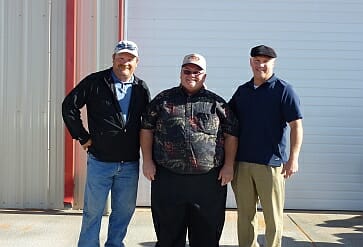 We boarded two buses provided by the Brownfield Independent School District and started our tour. The tour started by visiting vineyards in the south and east portions of Terry County. The first vineyard we stopped at was JoBreguen Vineyards owned by David Dill. He grows mostly Muscat Blanc. Scott Russell commented how it was a beautiful day and the first day in April which there wasn’t much wind.

A tractor with a sprayer was at the front of the vineyard and John Oswald of Oswald Family Vineyard described the use of the Bubco microsprayer. The sprayer is designed to keep chemicals in a defined area to prevent overspray and getting on the vines. 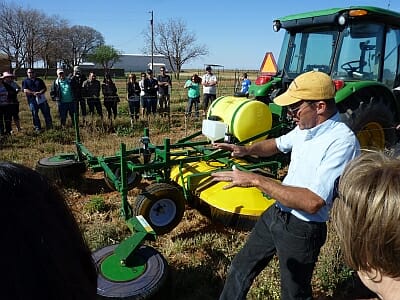 We got back on the buses and headed next to the Cox-Bogar Vineyard. Here we learned from Bobby Cox that his father owned 70% of the vineyard and Dr. Mark Bogar owned 30%. What we learned next was that the vineyard was for sale. The entire vineyard, barn, and equipment were up for sale for $400,000. Here’s your chance to own an established vineyard in the High Plains! 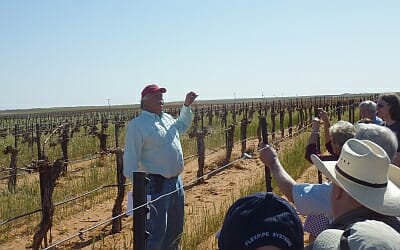 The 30 year old vineyard grows different varieties of grapes including Chenin Blanc, Picpoul, Marsanne, Muscat Blanc, Merlot, and others. There are currently 34 acres of vineyard and the Chenin Blanc has been contracted to Becker Vineyards. The entire farm used to be watered using pivot irrigation but today new vines use underground irrigation. While driving to the vineyard, I could see tall grass between the rows and Bobby Cox explained it was rye grass which helps avoid wind erosion.

Andy Timmons gave an explanation of the weather system he uses to determine when the vineyard needs to be watered. The electrical stations have probes which are placed at various points among the different varieties of grapes which then send a signal back to a laptop. 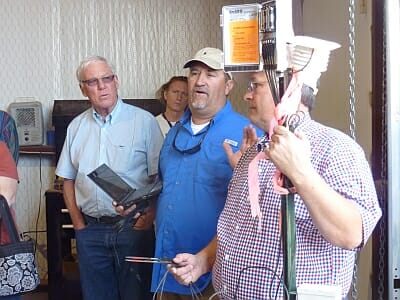 It was time to get back on the bus and we drove by Five Star Vineyards owned by Monty Graham which is mostly Muscat Blanc and Pinot Noir. We then passed Young Family Vineyards first started by Bobby Young and was one of the first commercial vineyards in the High Plains. Larry Young manages the vineyard now and grows Cabernet Sauvignon and Muscat Blanc.

We then arrived at the largest single owner grower in Texas, Dr. Vijay Reddy and Reddy Vineyards who has 216 acres of vines planted. Bobby Cox told us he has the oldest Roussanne on the High Plains and was also the first grower of Montepulciano. While driving to the center building in his vineyard, we passed Sangiovese which Bobby said two weeks ago before the last freeze, had nice foliage.

Mr. and Mrs. Vijay Reddy greeted us and welcomed us to their vineyard. Lunch was sponsored by Rickey Dunn and wife Karen Dunn from the Terry County Farm Bureau. We all enjoyed a nice lunch and took advantage of the vineyard view from Vijay’s second floor building. 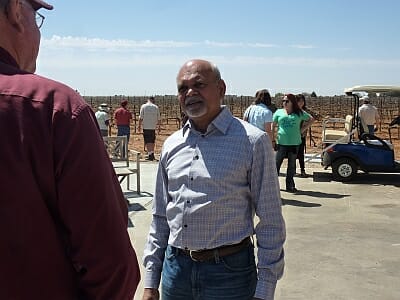 After lunch we boarded the buses to tour the vineyards in north and west Terry County. We did not stop again at any vineyards but drove by the Rusty Smotherman vineyard that grows Merlot and Muscat, and Castano Prado owned by Tere Caswell and Tom & Linda Hesse. They sourced the Albariño for McPherson Cellars who in turn has won medals with the wine.

We then drove by the largest family vineyard in Texas, Bingham Family Vineyards, which Bobby said is now over 250 acres. The largest vineyard in Texas used to be St. Genevieve with 1000 acres but we were told there is now only 80 acres of vineyard there. Bobby said, “The sodium adsorption ratios (SAR) were so high in that area that the 1000 acres they watered for 20 years will probably not grow vegetation for the next 1,000 years. 1,000 years from now you will be able to look down and see a square where that vineyard was because nothing will grow there.”

For those like me who do not know what SAR is, the definition at Wikipedia is: Sodium adsorption ratio (SAR) is a measure of the suitability of water for use in agricultural irrigation as determined by the concentrations of solids dissolved in the water. In general, the higher the sodium adsorption ratio, the less suitable the water is for irrigation.

We drove by Bayer Family Vineyards owned by Alan Bayer, who happened to be sitting in the same row as me on the bus. The last vineyard viewed was the Oswald Family Vineyard. John Oswald was on my bus and he said Bobby didn’t miss anything while explaining about his vineyard.

The interesting tour of some vineyards in Terry County had completed and we returned to Texas Custom Wine Works. During our tour we learned of the damage caused by the late freezes this year. One grape which did not fare well is Viognier and overall, it has been badly damaged. One winemaker told me he was hoping somebody would have a little excess of Viognier and he would be the first one to raise his hand. The overall damage of all the vineyards though will not be known for another 3-4 weeks.

After a short break, people commenced to Diamante Doble Vineyards in Tokio where a shrimp boil was hosted by Mr. and Mrs. Jet Wilmeth. The meal was sponsored by Ag Texas Farm Credit Services of Brownfield. The shrimp boil was delicious and quite a few people enjoyed eating, networking, and drinking Texas wine through the night.

It had been another long but fun and interesting day in the High Plains of Texas.