We had already enjoyed two wonderful days in Mendoza with Day 1 giving us a great introduction to Mendoza and Day 2 letting us harvest and blend Nice Winery’s Malbec. Our final day of three days in Mendoza was to travel farther from Mendoza city to the Uco Valley which was about 90 minutes away. Along the way our guide, Ivana Basualdo, taught us what a mate was, which is a very popular drink in Argentina. The drink is similar to tea with different types of herbs instead of tea bags. It is brewed in a special cup which comes in all kinds of designs. In fact after learning about mate we ended up seeing many stores which had mate cups. After pouring hot water in the cup, the herbs are stirred with a special straw which has a strainer on the bottom. It is through this straw which you drink the mate. It is very common to share a cup of mate with close friends and family members by passing around the cup. I believe the mate was a big hit because at least two couples ended up buying one later in Mendoza city. 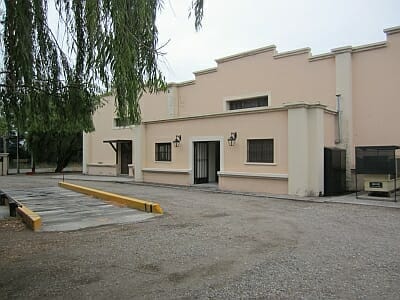 The first winery we visited was San Polo Winery. It is located in La Consulta which is a small sub-region in the southern Uco Valley and is 1002 meters above sea level. We were greeted by export manager Juan Del Bono who would be our guide while visiting. We learned the winery was the third oldest in Uco Valley and the building was built in 1902. They also create wine in the traditional style. 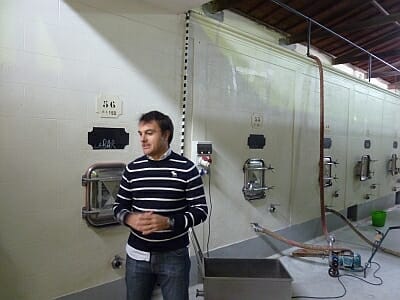 We toured the winery’s crush facility complete with two grape crushers and then basket presses with no bladders but a large hydraulic press which presses the grapes from above. Concrete tanks are also used at San Polo Winery and the ones we looked at were 15,000 liter tanks. We visited the barrel rooms which were below and by other concrete tanks. The barrel rooms were in fact originally huge concrete tanks. We learned that San Polo exports to 25 different countries. 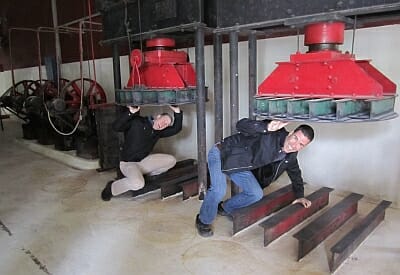 Ian and Ryan get pressed

The winery has a capacity to produce five million liters of wine and currently produces three million. They get grapes from their five different vineyards including the one at the winery. All five vineyards comprise 180 hectares of land. 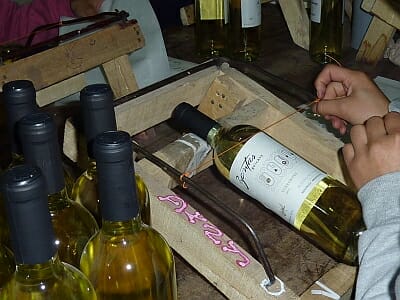 After the tour we visited the tasting room and all sat around a table. We then tasted these San Polo Winery wines:

It was a wonderful tasting and we all enjoyed our visit to San Polo Winery. 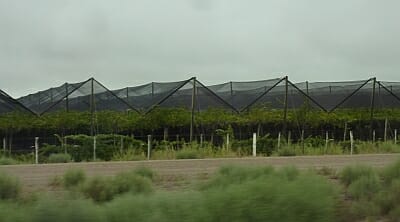 Next was a visit to a modern winery in Mendoza called Salentein located in the province of Tupungato. Let me just spoil the ending and say this is the most impressive winery I have ever visited. It looks like a nice building on the outside but the inside of the winery is just incredible. We went to the first building which houses a restaurant and art gallery. The group had lunch at the restaurant which again was fine dining.

These are the courses and paired wines:

Salentein vineyard on the way to the winery

It was then time to join up with a group for a tour of the winery. Behind the first building are acres of vineyards and then the winery building. We learned from the guide that Salentein owns three wineries. One in fact was across the road from where we were and then there is one more in another location. We passed a Salentein Fruit plant earlier on the way to the winery so the company handles different produces. 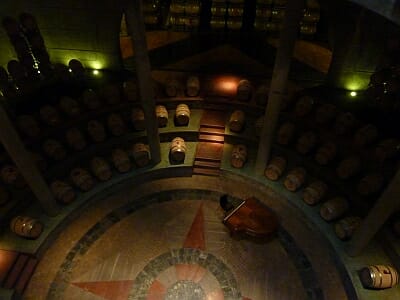 Looking down at barrel room of Salentein

Upon entering the winery we went past the showcase at the entry and visited the tank room. I could not begin to count how many stainless steel tanks there were because they were all aligned in a circular pattern around the huge room. In the middle of the room was a railing surrounding a large hole which while looking down you could see the lower floor. The first thing noticeable on the lower floor was a grand piano and then the start of a circular pattern of oak barrels leading to stacks of barrels along the sides of the walls. 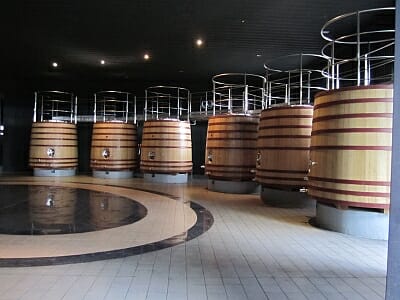 Next to the tanks on the top level was a room with large barrels which are used seven times and between each use the barrels are sanded down inside to reach fresh oak. We walked down the stairs to the lower level which we had seen from above. We learned Salentein uses approximately 4,000 barrels as the number varies between the wines they make. Overall, just the barrel room itself was so impressive in size and barrels that no photo can do it justice. The barrels were stacked along the wall and then there were a number of levels leading down to the very lower floor, much like a sunken floor. Each level was circled by wine barrels. The whole setting was just an incredible view. 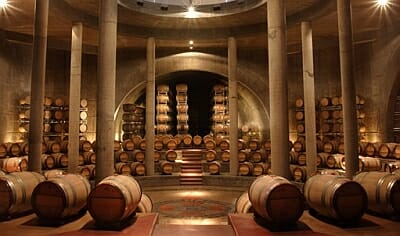 We then prepared to do a tasting at the winery. On the same level as the barrel room there are two tasting rooms next to a large conference room. We looked first at the large room which contained photography equipment and a few people. Ryan and Ian first went in there and surprisingly met the owner of Salentein who occasionally stops by the winery. The Dutch owner of Salentein is Meindert Pon. His brother Ben Pon owns Bernardus Winery in California. Later when the tour guide heard the owner was there, he was surprised and made the comment that he has worked there for two months and still hasn’t met the owner.

Back in the tasting room, we tasted a 2011 Pinot Noir and 2011 Merlot. These wines on top of the 2011 Salentein Chardonnay and 2011 Salentein Malbec we had at lunch gave us a great tasting of the wines which Salentein can produce.

On the way out of the winery, we visited the art gallery in the front. There was an art store on the opposite side but I did not get a chance to see what they were selling.

We drove back to Mendoza city and prepared for the most incredible dinner most of us has ever had. I have seen many shows like Top Chef with fine dining but have not had the chance to experience many. One was actually the lunch at Ruca Malén Winery two days prior but the dinner this night took top honors. We were supposed to have dinner at the home of Chef Pablo Ranea and Alejandro Cohen, but Alejandro was feeling under the weather so Chef Pablo Ranea prepared and served the same meal at their restaurant Azafran instead. 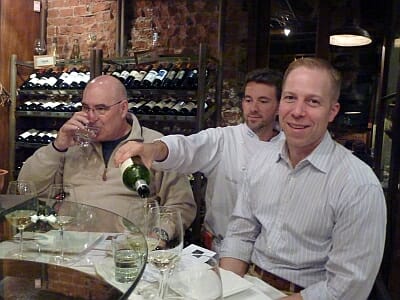 We all sat in the wine room around a round table among all the wine selections on the walls. The restaurant does not have a wine list so people come in to select their wine from the shelves.

The meal “outside” of the restaurant Azafran is called the PIRCA Food & Wine experience. The dinner started at 8:30pm and finished at 12:30am. That’s four hours for dinner. It could easily have gone longer but since Gloria and I had to catch a very early flight, the group decided against a break before dessert and go right to dessert. 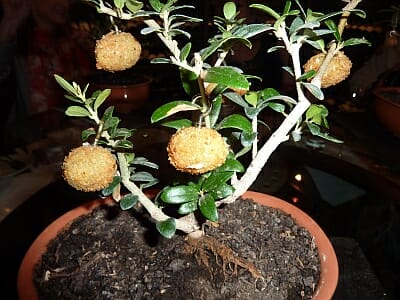 The dinner was a six course wine paired meal which included the most amazing food: 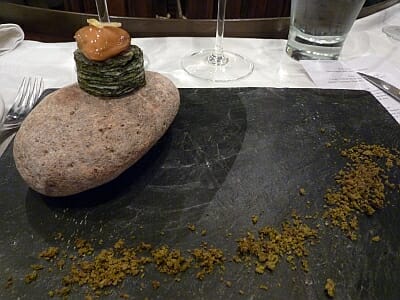 Mussel on top of seaweed millefuille 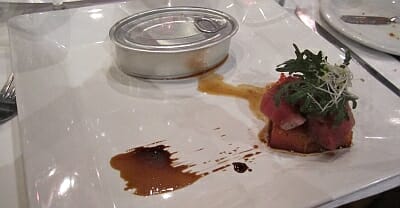 Seared ahi tuna with salmon sashimi with guacamole in can

This was easily the best fine dining meal I have ever had and Chef Pablo Ranea had done a fabulous job. We also learned from Chef Pablo during the meal that 90% of the Torrontés in Argentina is made in Salta.

As I mentioned in an earlier post, when you are with two chefs/sommeliers like Ryan Levy and Ian Eastveld, you eat the best food and drink the best wine. The dinner was the perfect ending to a wonderful trip. We had an unbelievable time with our group in Mendoza and would like to thank Ryan, Ian, Ivana, and all others involved for an experience we will never forget.