Our first day in Mendoza was full and our second day was no exception. Instead of visiting different wineries, we were going to spend the entire day at the Cecchin Family Vineyard where The NICE Winery makes their Malbec and Demi-Sec Sparkling wine. We were to do harvesting and blending to determine what would comprise their 2011 Malbec. 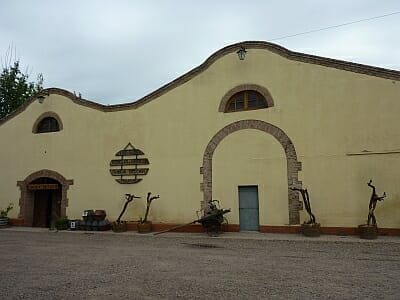 We arrived at Cecchin Family Vineyard with large vineyards in the front before we reached the winery. We met owner and winemaker Alberto Cecchin who also has a house on the property among the vineyards. In fact we all learned that Alberto was actually born in a house on the property. That house has been renovated into a guesthouse. Our guide for the day was Mario Lazzaro who is the winery’s export manager and also helps translate since Alberto Cecchin only speaks Spanish.

All the growing at Cecchin including non-grape growing such as olives and other fruit and vegetables is done organically. Trees are planted among the vineyard which helps keep the produce grown organically. They also make their wines organically with no sulfites added.

We took a quick tour of the outside of the winery. A Muscat de Alexandria (Moscatel de Alejandría) grapes canopy overhead was nice to walk under and we were also able to taste the hanging grapes. These are the same grapes used to make The NICE Winery’s Demi-Sec Sparkling Wine.

Cecchin Family Vineyard has vines from 1923 and had another big planting in 1954. They are always replanting vines though. The older vines produce fewer clusters of grapes but the quality is better because the yield per plant is lower.  Ryan said the current yield is about one bottle of wine per plant. The rows are planted close to each other so there is no room for a tractor between the rows. Instead they still do plowing with horses.  The farm is organic and sustainable with everything tilled back into the soil. The winery uses grapes from 77 hectares of vineyards. All the Malbec used though is at the winery location and is in 11 hectares. Cecchin Family Vineyard also chooses to do their irrigation using traditional flood irrigation. 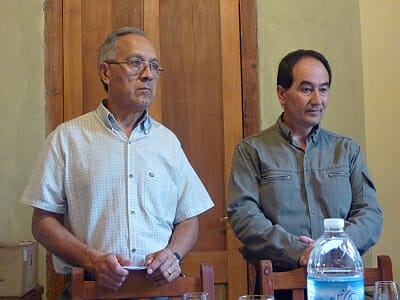 The original plan was to harvest in the morning but since it was a cloudy day and the weather was predicted to get warmer later in the day, the decision was made to blend first and harvest later when it was warmer. Before blending we met winemaker and enologist Don Carlos who helped Ryan and Ian and the group during the blending. The idea for blending is to select the barrels to use along with any tank wine including percentages of all to make the finished wine. Ryan and Ian had visited the winery the day before so they had already narrowed down the barrels to select from for blending.

There were two choices for a tank base which is used approximately 20% in the final blend. The first tank was 100% Malbec and the second was an 80% Malbec and 20% Cabernet Sauvignon. Ryan and Ian had narrowed down the Malbec barrels to 6 bottles which represented 6 groups of 10 barrels each. They end up using about 60 barrels which produces around 1,500 cases of wine. 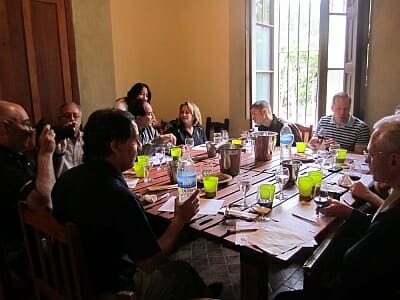 We all sat around a large table and started the blending by first tasting the 2009 NICE Winery Malbec Reserve so we would know what they were trying to accomplish. We also tasted the 2010 NICE Winery Malbec Reserve that Ryan & Ian had blended the prior year, but has not been released.  We then tasted the two tank samples. Speaking of tanks, Cecchin Family Vineyard uses concrete tanks like a lot of the older wineries do. We were instructed to provide tasting notes for each tank sample. We then tasted the barrel wine samples 1 to 6 and tasting notes were taken again. Finally a Syrah was tasted to help determine if they wanted to blend a little into the Malbec. Ryan and Ian decided to blend together barrel samples 1 to 6 and then to compare against the base tank samples.

It was time for lunch and since a lot of Malbec had been tasted, it was decided to give our palates a rest and enjoy lunch. Cecchin Family Vineyard has a restaurant on site which is literally in the vineyard and under a walnut tree called La Sombra at Cecchin. The lunch was a traditional Mendocino lunch. What an incredible experience to eat outside in the vineyard. People also had fun picking walnuts from the tree to eat. There are many olive trees among the vineyard and different olives were provided to enjoy before lunch. 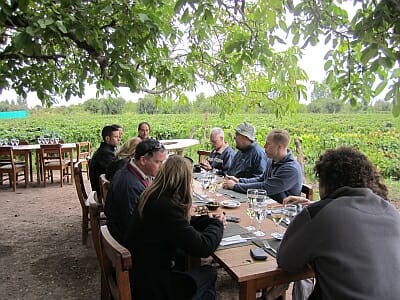 Lunch in the vineyard

The first course we had started with a wine made from 80% Chardonnay and 20% Pedro Ximénez. This was a new white grape to us but the blend was delicious. We learned that the wine Don PX is made with Pedro Ximénez. The wine was paired with tomatican which is a ground tomato and vegetable appetizer made entirely from ingredients grown on the property.

The second course was a beef dish made with Muscat de Alexandria. This course was paired with a 100% Carignan wine.

The 2012 Demi-Sec was provided as the dessert wine. We learned the wine is made with only one fermentation under pressure and no addition of yeast and sugar unlike a lot of sparkling wines. Cecchin has been making their Demi-Sec Asti-style since 2006 from the Muscat de Alexandria grape. In 2012, residual sugar was 43 grams per liter and alcohol is 12.6%. We also learned there is no sugar or yeast added which eliminates headaches, so drink up! The wine was paired with pears cooked in Carignan wine along with mascarpone.

It was another fantastic meal and we could get used to this style of eating! 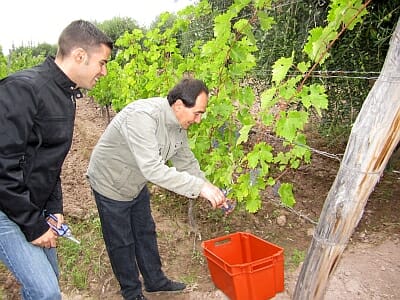 Alberto Cecchin shows how to harvest

The weather had not warmed up as expected but we decided to work off our lunch and harvest some Malbec grapes. All of us grabbed a bin, were given shears to cut the grape clusters, and we went to work. Everyone would eventually slow down and get tired of bending over to harvest the grapes so each would head back to where the trailer was waiting for the bins. As payment for our work, we each received a collectable coin from Cecchin Family Vineyard.

After harvesting we had to see the tall vines which we had seen in a photo at The NICE Winery. Malbec vines don’t grow tall compared to Cabernet Sauvignon and Zinfindel, and certainly not as tall as the Criolla grapes grown on the property. These grapes are used for making grape juice concentrate and they are large grapes. That helps explain why the vines are so tall. They easily were 6 to 7 feet tall and were planted in the 1960’s. The photo we had seen at The NICE Winery was taken during the winter but this time large grape clusters were hanging from the vines which made the foliage even more impressive. We all enjoyed trying to find the tallest vines from which to have photos taken. 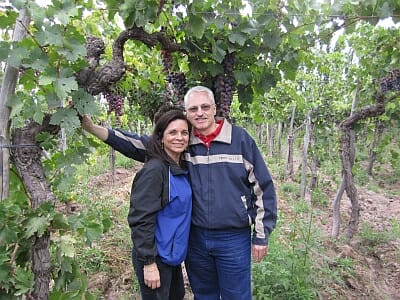 Jeff and Gloria in the tall vines. Yes those are vines, not trees.

When we were finished taking photos we headed back to the winery to do some more blending. On the way back we walked by our dinner being cooked by men dressed in Argentine Gaucho attire, which was to be an asado dinner. Asado is traditional barbecue which is cooked on a grill or in our case over an open fire. The smell of the meats cooking was intense and we were able to taste some sausage. 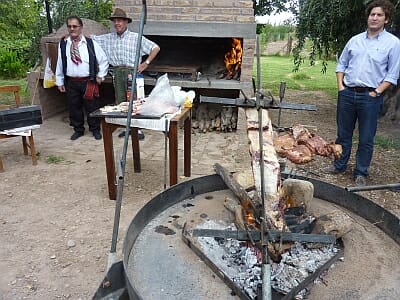 We then tried different blending variations to pinpoint which blend would provide the best wine. We were told to realize this wine was still unfinished and would not be available at The NICE Winery until later in 2014, so a little guess work was needed to predict how the wine would taste after more aging. We tried a few variations and I believe a decision was made as to the correct percentages with the blend. Ryan and Ian were going back to the winery one last time later in the week to make the final decision so we will all have to wait and see what the final product will be next year. 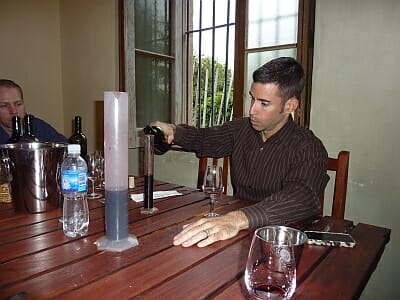 It was now dark (the day had flown by) and it was time for dinner even though it seemed like we had just eaten lunch. We entered the winery’s tasting room where we learned the tasting room part of the building had been built in 1898. The tank room was built in 1923 and other parts of the winery were built in 1958 and 1963. A large dining table had been placed in the middle of the tasting room.

We first were able to taste the 2011 Muscat de Alexandria which is a dry version with the same grapes used to make The NICE Winery’s Demi-Sec. The wine is fermented dry instead of continuing fermentation like the Demi-Sec is. Next Alberto Cecchin treated everybody to a 2005 Malbec that was 100% organic with zero sulfites added, which helped prove how well an organic wine ages over time.  We then tasted a Malbec and Cabernet blend, also with no sulfites added from 2011.

The asado dinner started with empanadas and continued non-stop with various dishes like the sausage, beef, and pork ribs. The ribs had been basted in an incredible seasoning while cooking over a wood fire. Dessert was flan with their 2012 Demi-Sec.

A surprise was then held with two dancers doing a number of folk dances to entertain us. It was an excellent ending to a long day at Cecchin Family Vineyard even though it did not really seem long. The hospitality of the winery showed exactly what a family winery can provide, and we all left feeling like we were part of the family. 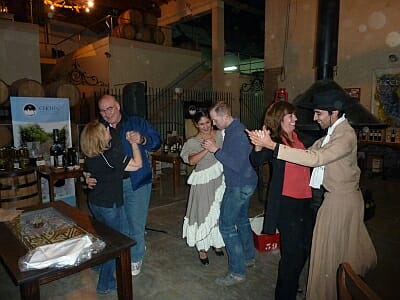 Everybody dancing after entertainment

Our Day 1 was fabulous, Day 2 was excellent, and we couldn’t wait for Day 3.